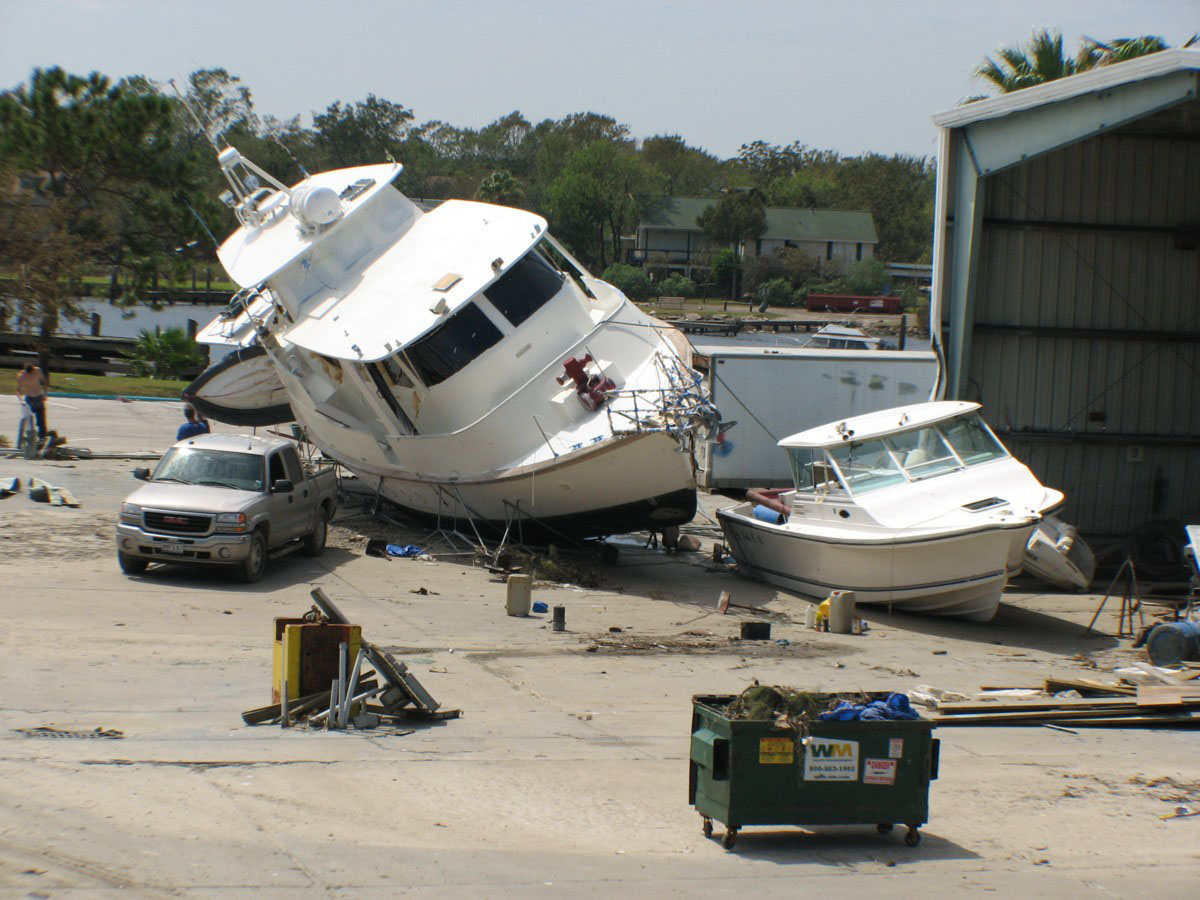 Shipyards and marinas all around the Galveston area were left in disarray.

Boat owners and fishermen on the upper Texas coast got a grim reminder of what a hurricane's fury can do. Many people were caught off guard for what was to only be a Cat 2 Hurricane, but we now know there are other factors to consider besides the Saffir-Simpson scale. The size of the storm and where the eye wall makes landfall are extremely important. Because Ike was so large it was pushing a lot of water, and the shallow Texas coastline encourages the storm surge to race inland and create incredible damage. The effects were devastating to say the least and the Bolivar Peninsula situated less than 15 miles northeast of the eye at landfall was absolutely devastated. Galveston Island also suffered major damage. Many areas looked like a war zone including the Galveston Yacht Basin. The eye of Ike went right up Galveston Bay. No matter what strength a hurricane is forecast to be, it's where the eye comes ashore that counts. Even in small storms the inner core is violent. For the boater, you have several options available to protect your boat and we want to look at these and the scenario that developed during Hurricane Ike.

For trailerable boats, go inland. For vessels too large to trailer you must either run from the storm or relocate to the safest harbor and ride it out. It sounds pretty simple, but the way circumstances changed as the storm approached, it really wasn't.

As everyone watched Ike come across the Gulf, the forecast track was pretty steady on the southern coast of Texas. The Corpus Christi area looked like it was going to get hit and they started preparing for the storm. When the storm got closer, the track changed due to a weather feature coming in from the northwest and within 48 hours Ike was bearing down on Galveston. Residents of the Houston and Galveston area who were expecting the storm to go south scrambled to get their homes boarded up and businesses secured. Many boat owners found little time to do anything about their boat. You'd think there would be plenty of time, but there really isn't. Water levels rise and the wind starts blowing well ahead of the landfall of a hurricane.

The best option for trailerable boats is to get out of harm's way, well away from the coast. There is always the chance a tree can fall on it, but the odds are well in your favor that your pride and joy will do just fine. If you have a choice, travel to the east or west of the storms projected path.

If your boat is too large to trailer, your best choice is to run away from the storm. It helps if you start this process as early as possible because the wind will be increasing and your option to run offshore may be limited. Running inside can also be a problem because the Intracoastal Waterway can get out of its banks with the approaching surge and therefore difficult to navigate. Key bridges and locks may be closed as the wind picks up and evacuations begin. When choosing which way to run, consider the forecast track of the storm and how it is trending. Go in the opposite direction and call ahead for dockage at a secure marina, preferably with floating docks.

Your final option is to ride the storm out. This can be a very bad decision and the photographs of what happened during Hurricane Ike verify this statement. However, if you are ever forced to ride one out there are some very important factors to consider. Ike taught us that the boats moored at protected, floating docks faired best. The large enclosed marinas on Clear Lake with floating docks, namely South Shore Harbour, Waterford Harbor Marina and Marina Del Sol fared well during Ike and most of the boats in these marinas escaped major damage. Even the more exposed marinas with floating docks on the south side of the lake came through OK, all things considered. Unfortunately the north shore didn't fare as well and took an extreme beating, even with floating docks.

Fixed docks did not fare well on either side of the lake. Some boats that were tied properly in semi-protected fixed slips made it through OK but many did not. One strategy that failed miserably was hauling out and storing on jack stands. This is a common method in Florida and the East Coast, but it didn't work too well here in Texas. The surge was so high that the boats floated off and ended up all over the place. Ike's size and our shallow coastline produced a surge much higher than areas that have deep water close to shore as is found on Florida's east coast. Also, the fact that Ike remained a Cat 2 (although it lacked only a few MPH to be classified as Cat 3) gave false security to many, including us, never guessing the surge would be so great.

So, what should you do? Moving the boat away from the storm is by far the most effective way to protect your investment. If you decide to ride it out, we have a few suggestions. Get into a slip on a floating dock in an enclosed, protected marina. Fill your boat with fuel and water. Many people without power to their homes went down and stayed on their boat after the storm because it had generator power. Fuel docks will most likely be out of commission. If you have any canvas or curtains, you might as well take them off because there's a good chance they won't be there later and if they rip, the wind can whip them against your boat and damage the paint or gel coat. Double all of your dock lines from every angle and try to spread the load evenly on all cleats. If you must stay in a fixed slip this becomes even more important and you must remember to tie your lines high to anticipate the rise in water level. Position the boat in the center of the slip and get rid of all loose items on the dock. Also, check the boats next to you. It won't do you much good if the boat next to you breaks loose and beats yours up.

Preparation is the key. Don't wait until it's too late to move your boat or reserve a slip. If the hurricane changes course you may end up moving for nothing or paying for a slip you didn't need, but that's OK. Ask any boaters who went through Ike, Dolly or Gustav and they'll say it is better to be safe than sorry.

If you make it down to Seabrook any time soon, come by our Fox Yacht Sales office at Tops-N-Towers and see what two feet of water does to an office and showroom. We consider ourselves fortunate; there are many others that didn't fare well at all. At Fox we have an extensive inventory of brokerage boats and we will be glad to help you find a boat or sell yours. For more information call our Seabrook office at 281-291-0656 or call Capt John Cochrane direct at 409-739-4817.