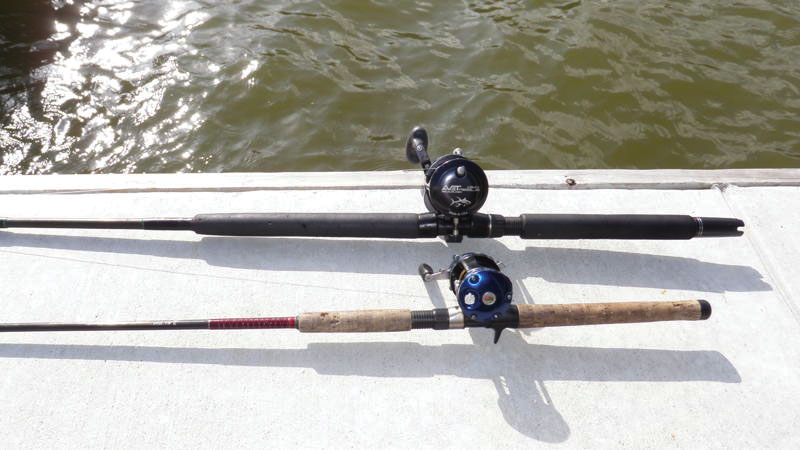 Landing sow snapper consistently requires heavier tackle. Rods and reels such as the lower of the two shown are simply not up to the task.
With the supplemental reopening of the red snapper season on October 1, 2010, it got me to thinking about tactics and targeting what is arguably the signature fish of the western Gulf of Mexico. I have had the good fortune to fish with some of whom I consider the best red snapper fisherman to ever wet a hook and have learned much from just watching them work. The first thing that hinders most people is their choice of tackle. To this day I have customers show up bright and early with a rod and reel outfit that was designed for trout and redfish, stating that they like use it for snapper because it's a lot more fun. After losing a few fish to their inadequate tackle they are quick to switch over to mine. If you have ever heard the saying, "never take a knife to a gun fight," you will quickly understand the meaning of that adage when you tie into a large snapper over big structure. My minimum choice of tackle is a 40 to 50 class 7-foot rod with 50lb test line and a quality lever drag reel even then I will get my hat handed to me on occasion. Realistically, if you can present the bait with a little subtlety and feel the bite, don't be afraid to go a little heavy if you are targeting large snapper. Yes it is fun to catch a large fish on light tackle, but that just doesn't fit into the reality of fishing for large reef fish.

The best bait, rigging and presentation, for red snapper can be debated to no end, but what I have found to be most successful is using no leader at all; rigging directly to my mainline. If fishing fairly sticky structure I'll go no heavier than 100lb test leader and as light a weight as I can get away with. I use a simple single hook setup preferring a single egg weight located just above the bait. I simply run the line through the weight and then loop it back through the hole again to prevent it from sliding up the line as the bait falls. I will often use 1 to 2 ounces of weight if the current will allow rarely going heavier than 4 ounces.

I often ask my customers if they have ever fished on a party boat. If their answer is yes, I just smile real polite and say, "OK forget everything they taught you." If you are wanting to target the larger fish, avoid the old standard double drop rig with a heavy bank sinker on the end. Yes it will catch lots of fish and the occasional sow, but you will quickly realize the benefit of light weight and a subtle bait presentation if you will just let go of the mindset that you need to go down as fast as you can to get to the fish. Jigs such the famed Snapper Slapper are deadly on just about any reef species, just follow the same philosophy. Keep it as light as you can and still get it down to the fish. Depth and current will ultimately dictate just how much weight you must use but I can't stress enough that you will be better served to focus on using as little as possible in any given scenario.

My primary bait choices for sow snapper would be either live pinfish or Spanish sardines. Cigar minnows are equally as effective as the sardines but not to a point that they justify the expense. As far as squid goes; I know I'll get an argument out of someone over this but I have always felt that squid consistently catches small fish. Their advantage is that they are harder for a fish to strip from the hook, but an equally talented angler fishing sardines will consistently outfish one with squid.

Positioning the boat above a given piece of structure is just another critical step in a successful day. I personally find more success in drifting or motor fishing a spot and rarely anchor when fishing for snapper. I always felt that in most occasions as a guide that anchoring was just a way of being lazy and only aided in making my job easier. I prefer to work a spot from all sides and find that any given spot can vary from day to day , moving around gives me the ability to check the bite from all angles . Fish your way down if, you're seeing fish at 40 feet start there don't get stuck in the old habit of going to the bottom to start fishing. Often the larger fish will be the highest in the water column. As you move or drift away from the apex of the structure you may want to keep fishing deeper, and never assume that just because you're not marking fish that there not off the spot out in the mud. Vary your presentation and depth and you will often find the fish will do something consistent, and the better fish will become fairly predictable, at least for the moment on that particular spot.

Fishing for quality Red snapper is as much an Art as it is a science and many times the one thing that that any given angler has over another is nothing more that location. Any one of us can improve our success on even the most popular spots if we just keep varying our presentation and keep our minds open to trying new tactics. The one thing I have learned in fishing is that even to oldest dog can learn new tricks.