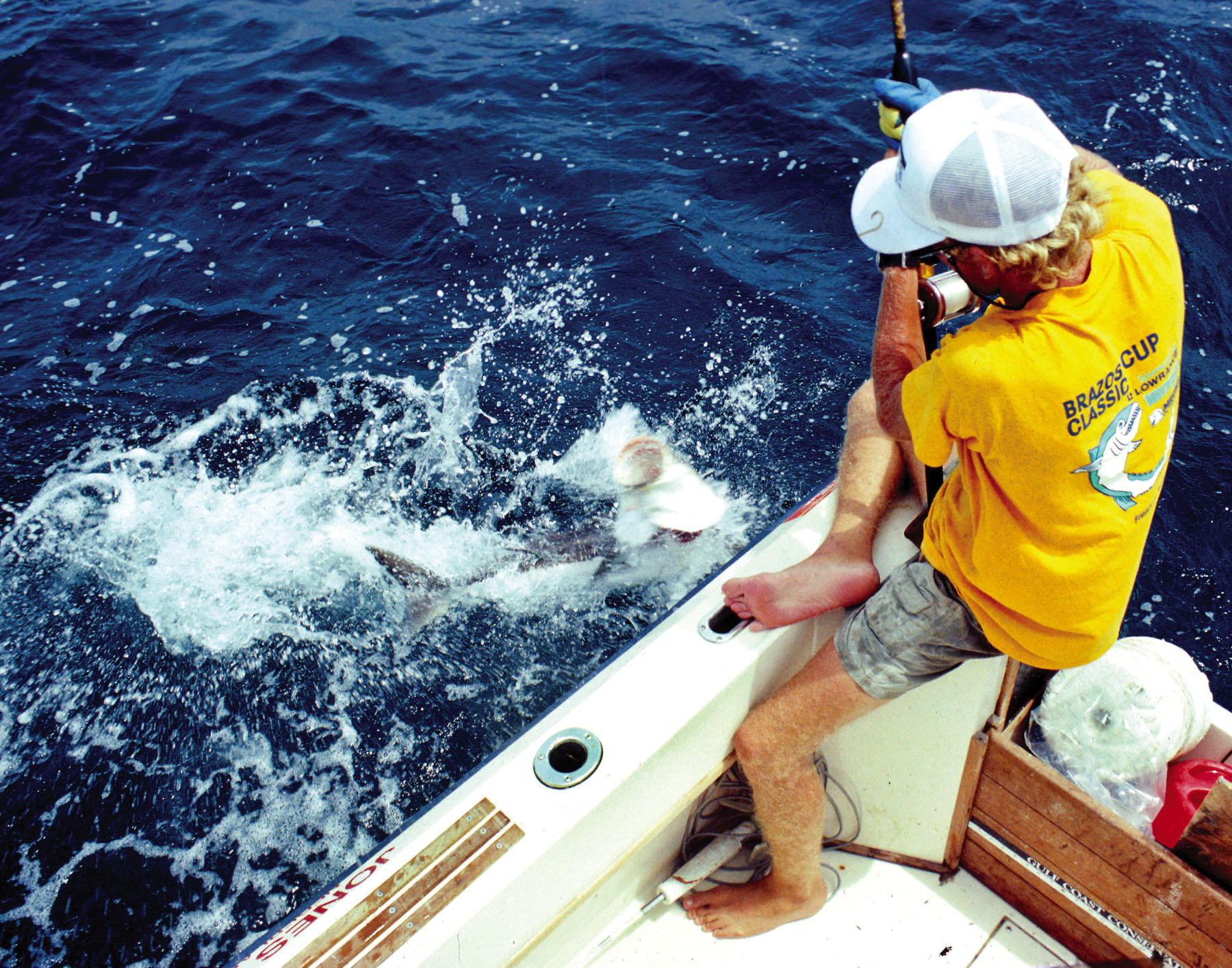 Savage action offshore during an early-summer tournament out of Freeport.
April has been “ling month” since we first headed offshore. It was ingrained into our young heads when local outdoor writer Ed Holder returned to Port Arthur with 16 of these fish, big ones, from a single offshore trip. It made a lasting impression, and we’ve always searched for ling if we could get offshore in April. Perhaps because they’re new, migrating in from parts unknown, they’re hungry and greedy this month—not the wary fish of late summer that cruise around the boat, disdainful of all baits.

Catching 16 today would be a tough job, even though they’re protected with strict bag limits. I don’t recall what sort of winter we had back then when Ed made his catch, but you can bet it was a warm spring day. This cruel winter just passed won’t help the ling action, and might even delay the spring run of these fish, unless we get some hot weather real soon. We need that magic 70-degree water along the coast, to kick things off for a number of summer species.

We can assume that 70-degree water first swirls around offshore platforms, before ever reaching the beach. That’s why visiting those near-shore platforms along the coast has obvious benefits; the guys out there tied up or trolling around have a good shot at getting bowed up on the first ling, Spanish mackerel and snapper, also the the last of the sheepshead spawning bite. Meanwhile, beach-bound surf anglers only minutes away are slinging plugs and spoons, perhaps grinding away in chilly high 60-degree water.

I’m speaking of the upper coast. The south half of the Texas coast will be basking in warmer surf temps and greener tides too, if spring’s wind doesn’t lash everything into brown chops and suds. April’s wind is often a problem, sometimes capricious and cruel, more suitable for kite-flying, but not always. We once made a three-day April trip to the Cervezas Rigs about 85 miles off Galveston in a 31 Bertram named Alacran, in flat-calm conditions the entire trip. Three glassy days in April…It was beyond belief, and I kept waiting for a punishing wind to deliver pain for our bold adventure, but it never did. We had a great trip with plenty of deepwater grouper to 50 pounds, big amberjack and also blackfin tuna. After our long run home, safely back in Clear Lake, we docked at the Turtle Club like salty veterans and had quite a party.

That was a rare, overnighter spring trip, but these close-in trips to state water platforms are more practical and still productive, in smaller boats on lesser budgets. One spring day in the very last days of March, Beaumont friend Pete Churton and friends visited the state water platforms off Sabine Pass with his venerable 16-foot aluminum boat, Get Lucky. Tying off the boat and using the old ways, all three anglers climbed 12 feet straight up a steel ladder onto the big platform’s lower deck, and began firing big spoons. Or lowered them to the bottom, where they could be doodle-socked up and down. They’d brought a young lady angler along who made a long cast, and was soon hooked into something big and fast. Her trout tackle spin reel fairly howled, but somehow the monster was always turned with a little line left on the spool, way out there. Time passed but eventually a fine kingfish appeared, passing by a few times. What to do? Undaunted, Pete climbed down the steel ladder and soon grappled with that king. There was a flurry of water, and then he surprised them with a victory cry, climbing back up with the 28-pounder, though rather slowly. I’m guessing that was one tired kingfish, since it was caught with something like 15-pound line and landed without a gaff. You can bet there are plenty more early kings out there in April—but you have to hit a weather window and make the most of it. Those easy limits of late sheepshead out there should finally yield to early kingfish and ling. A changing of the guard, so to speak, that ushers in summer’s fishing season.

Meanwhile, back at the jetties, we consider April the month when jetty redfish and trout replace winter’s reliable sheepshead. I’ve made some nice catches at the POC and Sabine jetties, when chunky redfish took over our catches. If you can score some sizeable live shrimp, and fish bottom in 20 feet of water around the rocks during a green, incoming tide, that’s the ticket. I have great memories of relatives visiting us in POC during Easter weekend, when dropping big live brown kickers to the bottom meant swift hookups on three-pound trout and high-slot size redfish, often at the same time. It was almost too easy.