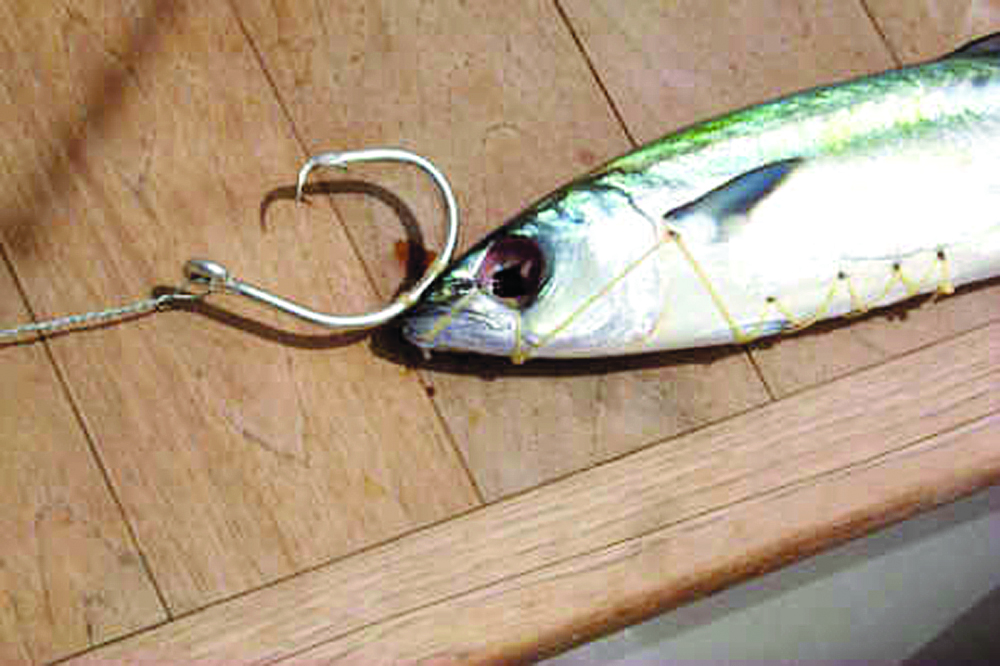 Have you tried using circle hooks on natural bait for billfish? Well if you haven't, you might want to start. New regulations from the National Marine Fisheries Service (NMFS), Atlantic Highly Migratory Species (HMS) Management Division's new Fisheries Management Plan (FMP) will require the use of non-offset circle hooks in billfish tournaments effective January 2007. The rule only applies to vessels when they are deploying natural baits (live or dead) or natural bait/artificial lure combinations (such as a ballyhoo rigged behind a lure). Only HMS permitted vessels are affected, but if you are fishing for billfish, you are required to have an HMS permit, so basically it affects every boat fishing a tournament. All vessels fishing recreationally for and/or retaining regulated Atlantic Highly Migratory Species (Atlantic tunas, Sharks, Swordfish and Billfish) in the Atlantic Ocean, including the Gulf of Mexico must obtain an HMS permit. For more information on HMS permits go to www.nmfspermits.com, the cost is $22.00 per year.

The new circle hook ruling has come into play after several years of research documenting the survival rates of tagged billfish using circle hooks vs. the traditional J-hook. Studies found that fish caught with circle hooks were much less likely to be gut hooked and their survival rate was much higher than the J-hook caught fish. One particular detail is important here and that is the term non-offset. Offset circle hooks did have a tendency to gut hook some fish, so the offset hook was removed. No offset or kirbed circle hooks may be used, only non-offset hooks such as the Mustad 39960D. Many fishermen have been unwilling to try circle hooks because of the fear of a poor hook up ratio. However, through the efforts of captains like Ron Hamlin in Guatemala, new rigging and angling techniques were developed that have circle hook catches on par with J-hooks and the bonus is that it's a lot better for the fish. Ron was one of the first captains to exclusively use circle hooks on his boat and his success has prompted many other captains to follow his lead.

Another regulation affecting marlin fishermen will be the limiting of marlin landings to 250 marlin per year. This will also be effective January 2007 and it is our understanding it includes blue and white marlin. If landings (bringing to the dock) of marlin near the 250 fish limit, NMFS may increase the minimum size limit to decrease the landings. Landings may be completely prohibited if the 250 fish limit is reached. Current federal minimum size limits for billfish are; Blue Marlin 99 inches lower jaw to fork in tail (LJFT), White Marlin 66 inches LJFT and Sailfish 63 inches LJFT. Spearfish may not be retained release only. With the increase in the popularity of tag and release practices among marlin fishermen and the trend to release smaller billfish in most tournaments, hopefully this quota will not present too much of a problem. In designing the rules for our tournament, the Texas Legends Billfish Tournament, we recognized the importance of tag and release many years ago and in the past eight years we have only weighed two blue marlin. We pioneered the concept of a video release format so billfish releases could be verified and fishermen could feel confident entering a big money tournament without weighing a fish at the dock.

What does all of this mean? Well, if you are just fun fishing, the circle hook rule doesn't apply to you. It's only required during a tournament and it's only required when using live or dead bait. Lure fishing is not included because lure hook-ups rarely deep hook fish, plus it wouldn't work on most conventional lures. The circle hook concept requires the fish to hang on to the bait, trying to swallow it. As pressure is put on the hook by the angler, the hook slips in the fish's mouth and it eventually ends up hanging in the corner of the jaw, where it does little harm to the fish. When lure fishing most billfish will grab a lure, but quickly let go once they have figured out its not real, not enough time to allow a circle hook to do its thing.

So, you don't have to throw away all of your hooks and run out and buy new ones just yet. However, you may want to enter a billfish tournament one day and it would benefit you greatly if you were already familiar and confident fishing with circle hooks. You may want to start experimenting with different hook sizes and rigging techniques to see how they work. We all know it works for tarpon, there's no argument about that, and it should work for billfish too. We were skeptical at first, but there is a growing number of fishermen enjoying success with this technique and I think all anglers who release fish want that fish to live to fight another day. Natural bait fishing with circle hooks is a way for us to achieve this goal.

If you have any questions about the Texas Legends Billfish Tournament or would like to learn more about big game fishing in the Gulf of Mexico, give us a call at Byrd & Cochrane 281-474-4000 or go to our website at www.byrd-cochrane.com.

Sign Up For Atlantic HMS News an electronic newsletter informing you of the latest HMS-related actions: www.nmfs.noaa.gov/sfa/hms/newslist/