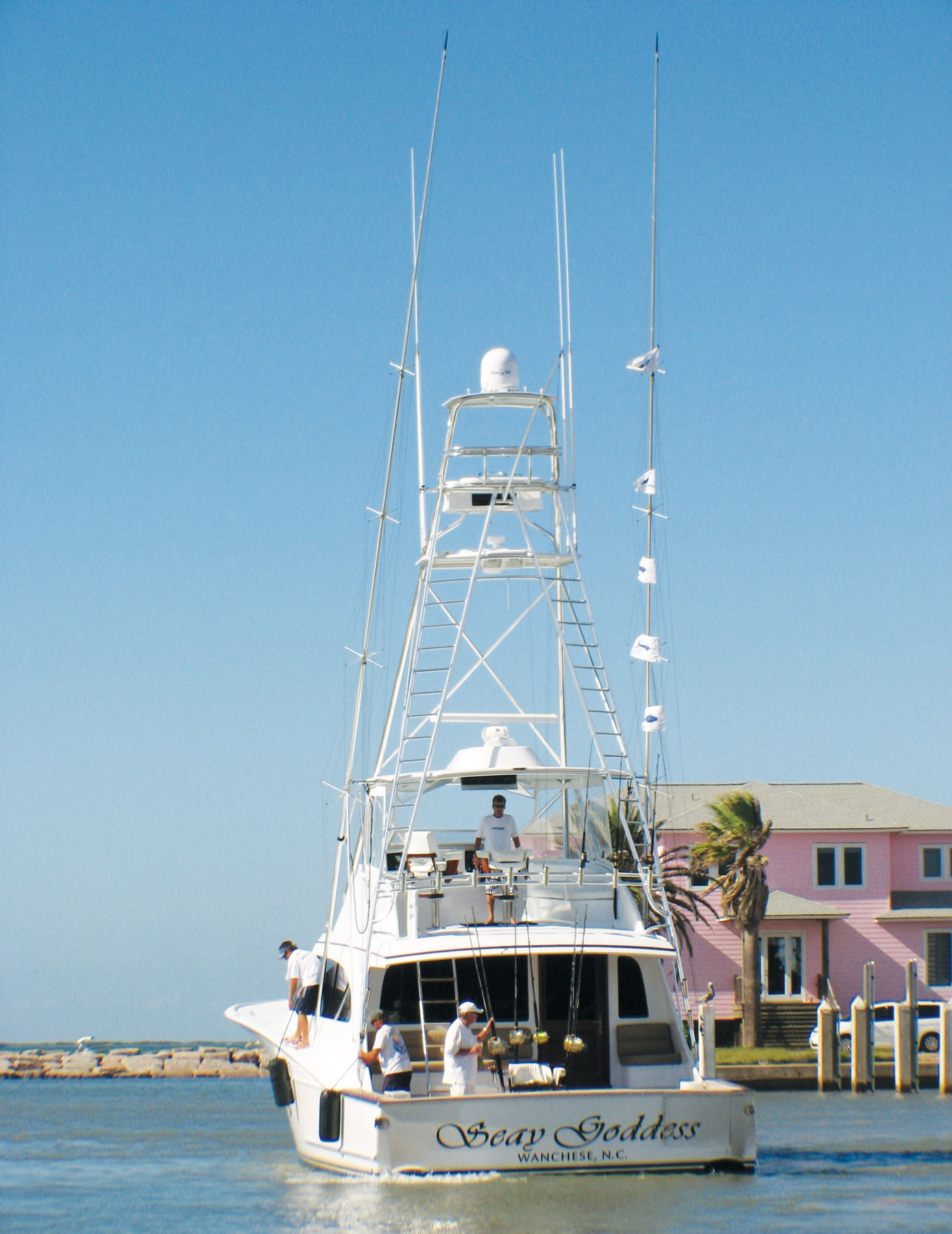 The 2009 bluewater fishing season turned out to be really unique with some incredible angling achievements and a new state record broadbill swordfish. The summer started off with a hot bite. When the wind and seas would allow, most anglers fishing in May and June had great success. One of the boats not letting the barnacles get too comfortable on it's bottom was Brett Holden's Booby Trap. They started the season with several outstanding trips, catching multiple billfish, which culminated into a fantastic first place win at the Houston Invitational Billfish Tournament. The tournament is organized by the Houston Big Game Fishing Club at Surfside Marina near Freeport, TX. Their catch included an amazing Double Super Slam which was the first one ever reported on our coast. A super slam is catching four different billfish species all in one day, a very unique event in itself. In the Gulf of Mexico, that usually means catching a blue marlin, white marlin, sailfish and a swordfish. A spearfish can count as one of the billfish, but they are extremely rare. A double super slam is even more exceptional and as the name implies is catching two of each of the four species in one day. To top it off, they did it during a tournament; a record achievement with a nice reward in prize money! It was an incredible feat and very deserving for a boat and crew that spend more time offshore than any other boat on the coast.

Some other exciting news this season is that the swordfishing has been phenomenal. Fishing at night for broadbill swordfish has become very popular, right along side fishing for yellowfin tuna. Anglers are finding out that when the sun goes down the fishing doesn't stop, and many fishermen experienced catching their first swordfish this summer. As the season progressed, larger swordfish started being caught. The crew of the No Sabe weighed a 144 pound fish in the Texas Legends Billfish Tournament, the largest of four weighed-in. There were several reports of big swordfish lost and a few around the 200 pound mark brought in. That set the stage for Shayne Babich and his crew on the Minno-Sota, a 42' Don Smith center console, as they topped the old swordfish record of 314 pounds with a 326 pound monster that they weighed in at Surfside Marina on September 5th. The 141.5 inch fish is now the official Texas State Record. Congratulations to angler Shayne and Captain Jim Stewart, along with crew; Daniel Miers, Anthony Lopez and Francisco Padua. That same night, not too far away, the Reel Attitude was also swordfishing and ended up weighing a 275 pound swordie. It became obvious that there were some big fish out there and a lot of anglers were getting excited. Getting in on the action, Mark Glassmeyer and crew on the Goin' Southweighed a 271 pound beast a couple of weeks later. There's a great video of this fish on the internet. Check it out at http://www.youtube.com/watch?v=k_xy6-h8Vd4.

On Sept. 12, 2009, a week after catching their big swordfish, the Reel Attitude, a 68' Viking, achieved another fishing first out of Port Aransas. After catching a sword at 1:20 in the morning, angler J.R. Douglas had a Super Slam by 2:25 in the afternoon, another very unique angling achievement and the first reported out of Port A. Congratulations to owner Jim Douglas and crew for an outstanding catch.

On the tournament trail, one boat had an incredible year congratulations to Donnie Seay, Capt. John Uhr and the crew of Seay Goddess. They had a red hot summer winning the Poco Bueno Invitational, the Texas Legends Billfish Tournament and Grand Champion of the Texas International Fishing Tournament. These guys won three of the biggest billfish tournaments on the coast, an achievement many boat owners, captains and mates can only dream of.

As hunting season begins, many of us think more about going to the ranch than heading offshore. However, the bluewater fishing is still very good this time of year and until the water cools down, there is plenty of opportunity to catch big fish. For more information about big game fishing off the Texas Coast or to just talk about fishing and hunting, come by the Fox Yacht Sales - Seabrook Office at Tops-N-Towers. At Fox we have an extensive inventory of brokerage boats and we are the exclusive Texas dealer for CABO Yachts. We specialize in sportfishing boats and motor yachts. Come by and get a great deal on your next boat.

For more information, check out our website at www.foxyachtsales.com or you can contact John Cochrane at [email protected].