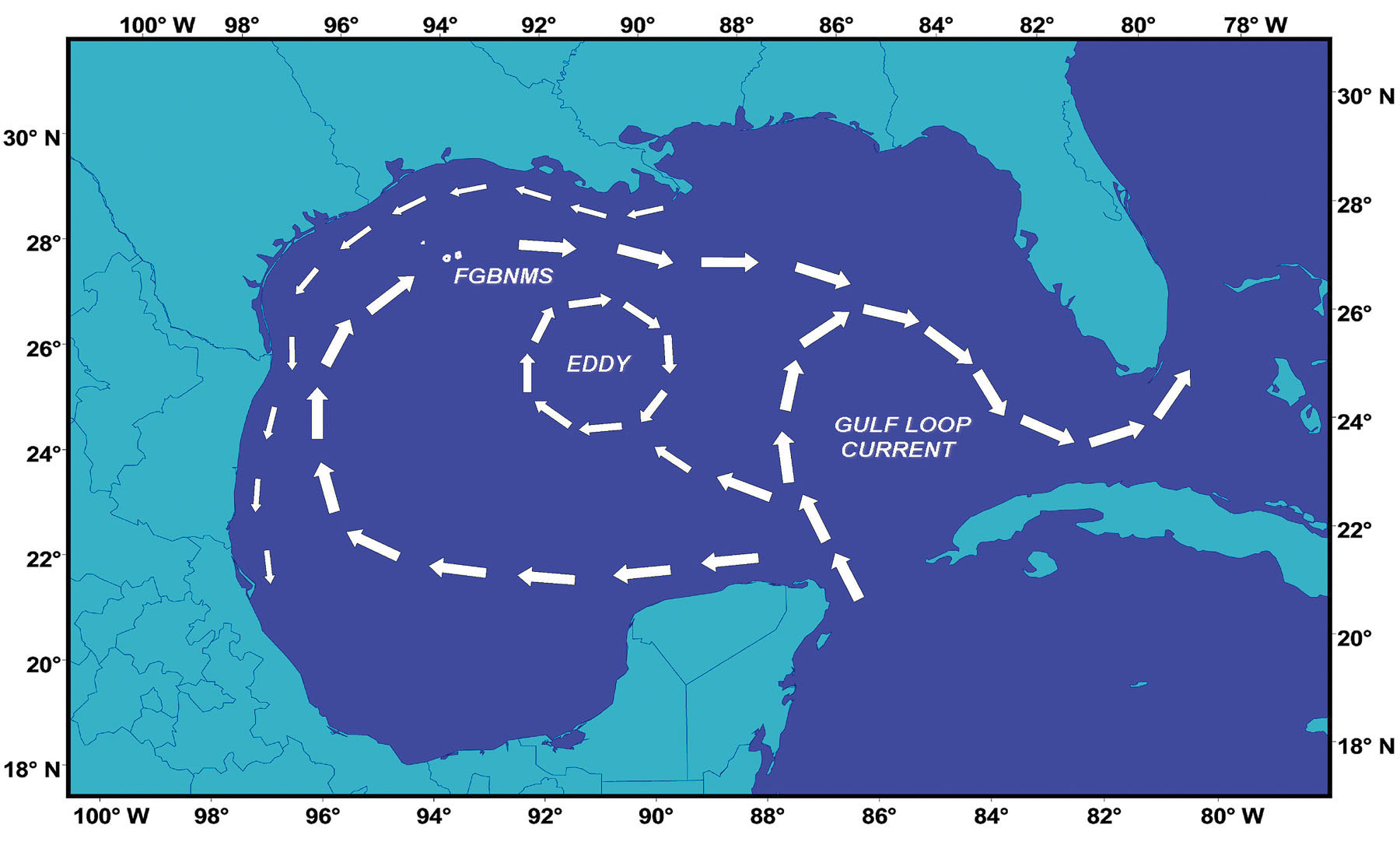 The Gulf of Mexico is an incredible body of water. It is the nursery ground for many species of pelagic fish and is the only known spawning ground for the western segment of the Atlantic bluefin tuna fishery. Warm tropical water is pushed into this basin by the Yucatan current and it makes a big turn near Louisiana and heads east. It continues south along Florida's west coast until it meets with the Florida Current near the Florida Keys and forms the Gulf Stream. This warm water journey is called the Gulf of Mexico Loop Current and it is the topic of many discussions at the moment due to the unfortunate oil spill caused by the Deepwater Horizon disaster. As of this writing there are ongoing efforts to stop the flow of oil from the drill site. Scientists are trying to predict what impact the oil will have on the environment and what coastlines will be involved. The Loop Current may play a vital role in this scenario if the oil manages to make it into the flow of this current.

As with all deep structures in the Gulf, the Deepwater Horizon provided a habitat for baitfish species and attracted large pelagics like billfish and tuna. Sportfishing boats from Texas, Louisiana and other Gulf states have fished around this rig in various locations as it moved around drilling for oil and gas in some of the most productive fishing areas near our coast. The deadly explosion and subsequent environmental problems will be talked about and analyzed for years to come. These structures that have enhanced our offshore fishing are now under scrutiny by the entire world. It is obvious that many things will be learned from this disaster and hopefully what we learn will be implemented to prevent another one from happening. However, there are many unanswered questions of concern to Texas bluewater fishermen. As of this writing, commercial and recreational fishing in federal waters is closed from the mouth of the Mississippi River to Pensacola, FL. Will the oil make it into the western Gulf? What impact will the oil spill have on our pelagic fisheries? What problems does the oil spill pose for our boats and motors?

Below the depths of the Gulf of Mexico lie vast reserves of oil. This oil seeps naturally into the Gulf in hundreds of places and according to scientists; the total volume of this seeping may even match the size of the Deepwater Horizon spill. However, the seeping oil is highly diluted because it is spread out over a large area. It degrades quickly and many of the species that live near these seeps have adapted to this type of environment over a long period of time. The highly concentrated flow from the damaged well poses a different problem. We know that many species will be affected on shore, but what about open ocean species? The oil will eventually evaporate, oxidize, and basically break down. However this takes time and until it either ends up on shore or mixes with the water and sinks to the bottom, these open water species may be vulnerable. What will the oil do to larval forms of pelagic species that are carried by currents as they grow and mature?

The answers to most of these questions are yet to be discovered. The loop current usually stays formed as it was described, but every so often, when the conditions are right, an eddy breaks off from the loop and heads west, ending up along the coasts of Texas and Mexico. If oil makes it to the Loop Current, it could be transported into the western Gulf.

What about pelagic species? The larval forms floating on currents near the surface could easily come in contact with the oil. Mature pelagic species live in the open ocean, between the surface and the bottom and should be much less affected. Marine biologists are gearing up to study how the oil spill will affect these pelagics and other marine life.

If you drive your boat through an oil slick, the hull surface is going to get oily. We have seen it with small oil spills along the coast; the main thing is to wash it off as quickly as possible. The systems on your boat may be affected differently though. Do not turn on your watermaker; the oil will kill the RO membrane. Oil can also coat the inside of heat exchangers and cooling systems, degrading their efficiency. Operating a vessel in thick oil should be avoided completely. However, if you happen to briefly encounter intermittent streaks of dispersed oil mixed with clean seawater, your systems should be OK. Our advice is to avoid any surface as much as possible. Stay in clean water. It is hard for us to believe a marlin or tuna would eat an oil soaked ballyhoo or lure. Hopefully, the spill will be contained soon and we will be spared dealing with this problem off our coast.

We hope you will join us in Port Aransas on July 1-4 for the Texas Tuna Mania and Swordfish Championship. For more information, please go to www.tunamania.com. Learn more about big game fishing by visiting us at our Fox Yacht Sales office at Tops-N-Towers.At Fox we have an extensive inventory of brokerage boats and we are the exclusive Texas dealer for CABO Yachts and Jupiter Boats.