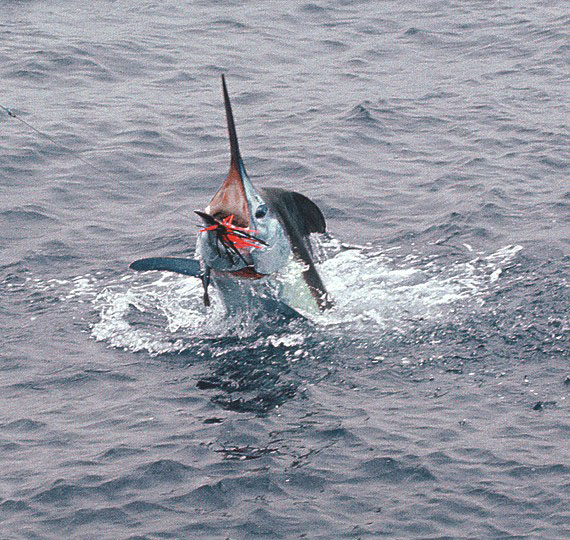 Blue marlin fishing is one of the greatest sports on earth - at least to some of us. We spend a lot of time thinking about these fish and we're always trying to improve our fishing methods. Trolling for these big game fish with artificial lures is one of the most popular techniques used by today's bluewater fishermen. Using this method is a way to cover a lot of water when searching for a predator that lives in the open ocean. Covering more area or "ground" can definitely be an advantage over other fishing techniques, when the fish are not concentrated in one place. The higher trolling speed allows more area to be covered in less time and can also trigger a chase response from the marlin.

We grew up fishing for blue marlin in the Gulf of Mexico, before the first deepwater oil platforms were built. Initially, all of our fishing was done with natural dead bait, but we gradually started trying lures when they became popular in the 70s. It was a struggle to leave those plastic things out there with no meat on them and most of the time they didn't stay out more than an hour or so before we put bait back on. But, with a little patience, we kept dragging them and started to catch some fish. As our confidence level increased, we began using lures more and more until we used them most of the time.

Big Game lures have transformed through the years with different shapes, materials, skirts and colors. But the basic idea has stayed pretty much the same. Fishermen trying to improve their catch ratio have utilized many different hook sizes, styles and arrangements and we've tried all of them. For many years we only used hooksets featuring two hooks. There was just no way one hook could be better than two. You have twice as many chances, right? Well, we now believe the answer is "Wrong". You may have two chances, but they are not the right ones. While struggling to improve our hook-up ratio, we decided to try using single hook rigs. Not only did we increase our hook-up ratio, our lures pulled much better and looked more lively. The single hook rig allowed the fish to grab the bait without biting down on top of the front hook of the double rig. The front hook was apparently getting in the way and it probably feels very unnatural to the marlin. We know that there is not much of anything "natural" about a lure, but the forward hook seemed to interfere with a clean bite.

The single hook works when the fish grabs the lure, the line comes tight and the hook moves, hitting the fish in the side of the jaw. When a marlin grabs this type of lure, a lot of drag is needed to make the hookset move in its mouth and set the hook. We use a short tag line and hit the fish with heavy drag on the strike, while the least amount of line is out, so stretch is minimized. The procedure begins with the reel set with heavy drag at 25 to 35 pounds for the strike, depending on your line test. The fish grabs the lure, breaking a small #33 rubber band in the tag line and turns to swim away. Suddenly, the line comes tight and the fish is hit with the heavy strike drag, which moves the lure and sets the hook. A minimum amount of line is out, which reduces stretch and optimizes the hook setting ability. After the fish pulls sufficient drag to set the hook (approximately 10 seconds), the drag is backed off to around 5-10 pounds while the harness is attached to the angler. Then, the drag is increased only as much as is needed to regain line. Don't use any more drag than is needed to catch the fish in a timely manner. Like all lure hookups, you are basically "snagging" the blue in the mouth as he attempts to eat the lure. It is a rare lure that actually gets swallowed like a bait, and all lures suffer from this "snag" effect. Because the hook location is not very deep, many pulled hooks are caused by ripping the hook out of the fish. It is especially important to back the drag off and keep it very light while fighting small blue marlin, white marlin or sailfish to avoid this scenario. When leadering a fish, always try to see how it is hooked before you pull too hard. One other advantage single hook rigs have is they are much easier to remove safely when releasing a billfish.

When choosing lures, pick heads with stable characteristics. You've heard of "straight runners" these are lures that run straight, with very little side to side motion and slowly "pop and smoke" in the lure pattern. These type lures with a short tapered lure head deliver a better hookup ratio. Straight running lures are much easier for a blue marlin to approach and strike than a lure with too much action that is running wildly. The original "Konahead" with a scooped out face was very popular in its day and raised a lot of fish, but because of its radical action it had an extremely poor hookup ratio. A marlin's eyes are on the side of his head and he must move from side to side to see directly forward, so the easier you make it for him to grab your lure, the better chance you will have of a successful hookup. You can use the wild running lures as teasers to attract fish into your pattern.

The next time you get ready for some bluewater trolling, try rigging some of your lures with single hooks. We think you will like what you see and catch more fish. If you want to find out more about lure rigging or big game fishing in Texas, visit us at Tops-N-Towers or come by our booth at the Texas International Boat Show, April 24-27th. This time of year many boat owners decide to sell their boat and move up to a bigger one while there is still time before the fishing season starts. Byrd & Cochrane is an authorized broker for Fox Yacht Sales who will also be in the show representing CABO and Riviera Yachts. Come by the Fox Yacht Sales booth and check out a popular CABO or a stylish Riviera, which is built in Australia. Fox also has an extensive inventory of brokerage boats as well and will be displaying several pre-owned models. We specialize in sportfishing boats and motor yachts. Come by and get a great deal on your next boat. For more information call our Houston sales office at 281-291-0656 or the Port Aransas office at 361-749-4870 or check out our website at www.foxyachtsales.com or www.byrd-cochrane.com.