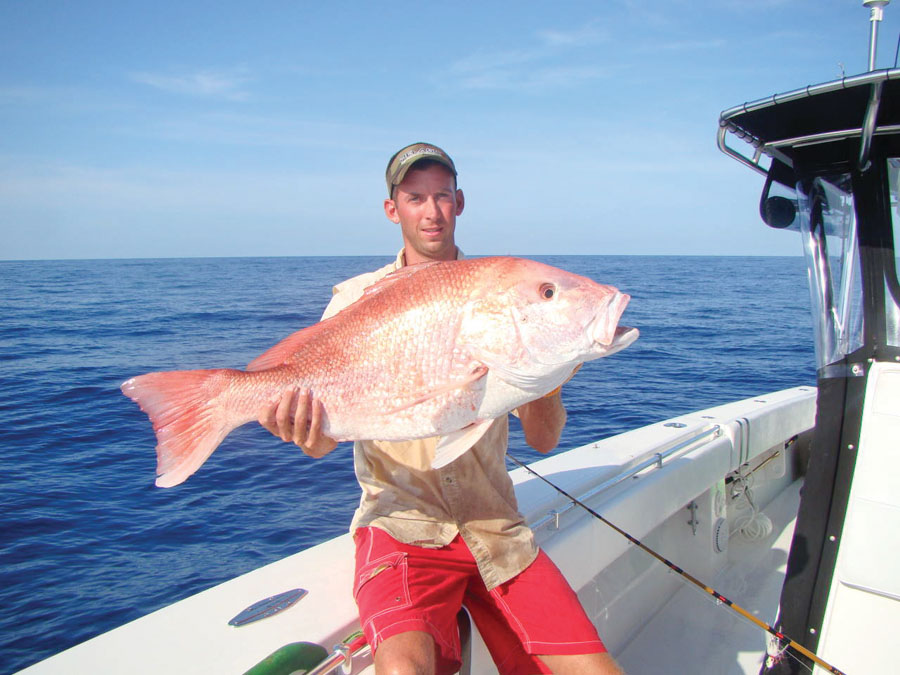 Red snapper is arguably one of the most popular sport fish in the Gulf of Mexico. If you speak to a room filled with avid offshore anglers about the current state of affairs in this fishery, you will get as many opinions as there are people in the room. If you are so brave; be forewarned and prepared for the worst. There will be those that just shake their heads in disgust and not have a single favorable word to offer. Some will point fingers at various groups of fishermen as the cause for all our woes. If you listen long enough you will even find business owners who blame their current financial woes on this one fishery alone.

You will find a few that will talk about the health of the fishery and brag about the abundance of large fish that they have caught over the last few years. Others will have multiple conspiracy theories about how the government is out to take away our ability to go fishing. Then you will find those that have basically given up on the fishery all together due to the lack of days available to fish for them. Last but definitely not least you will get those that are so passionate about red snapper that their anger overcomes all reason and the conversation goes downhill rapidly.

I have personally done just that. I have spoken to and in front of a room full of disgusted and sometimes angry fishermen on more than one occasion. To me, regardless of the varying opinions about red snapper management or lack thereof, a few things stand out that seem almost universally subscribed no matter your side of any disagreement.

Red snapper have definitely made a huge comeback in recent years. This comeback has been measured not only in abundance but also in the average size of snapper being caught. I personally have seen both. I fished 41 days of the 2012 red snapper season, losing the few remaining days to weather. The abundance of snapper on small structure that once held very few fish is unbelievable. Much of the bottom that I have historically caught vermillion snapper over is now holding red snapper in numbers that make it difficult to catch anything else.

As for the size increase I began keeping records on my boat in 2006 and have continued to the present. Our red snapper averaged just over 5 pounds when I started and our 2012 average was an incredible 13 pounds. That my friends is a whopping increase in anybodys book, especially when you consider that I really havent changed tactics in tackle, method, or locations fished.

Increased abundance in fish and larger average size seem to be the two things that everyone from the most novice fisherman to most educated academic can agree upon. Sadly, that is as far as that agreement is going to go. I have no problem understanding that if you cut the limit in half and the season from six months to less than fifty days, the reduction in pressure over a few years will allow the fishery to recover very rapidly.

The disagreement and often most heated discussion comes when you start to talk about where we go from here. As you delve into the overall management of a fishery, the issues are not simple. As a matter of fact they are extremely complex, even involving contradictory laws and some unreasonable or unobtainable regulations set by congress in the management of red snapper that were so recently deemed overfished.

As we open the Pandoras Box that we call fisheries management and take just one simple issue, like setting dates for a fishing season, we soon discover that a one-size-fits-all approach may work well for the recovery of a fishery, but it may never work for the fishermen and our fishing communities, regardless of how many fish we have out there.

What I mean by this is that each of us sees this fishery from the perspective of our own limited experience confined to fishing from our home ports. Often times we lose perspective of just how big the Gulf really is and how much this fishery changes from place to place. We know when we would like to go fishing or when it is the best time to fish in our part of the Gulf, but we may not have a clue how that matches up with what is best for the angler in Alabama or Florida.

Other aspects that add to the difficulty of something that seems so simple in a narrow view are seasonal weather patterns, accessibility to the fishery, overlapping with other seasons that offer opportunity for additional species, etc. Even strong and weak periods of tourism that is vital to so many of our coastal businesses must all be taken into consideration. Soon we discover that what you and I think would be the best time of year to fish just doesnt work for those six hundred miles away.

This all starts one to thinking, and after much head scratching, you hear things such as managing this fishery by state, region, or even by user group. You hear catch shares and tag systems being debated with angry lines being drawn in the sand. The thoughts are wide ranging, but one thing appears painfully clear there is no one-size-fits-all fix to it.

Lets look at the initiative made by the city of Destin, Florida. Destin filed in 2012 for what is called an Exempted Fishing Permit, (EFP). Very simply put, this EFP requested a specified poundage of red snapper to be set aside for the Destin Rodeo. The Rodeo is a fall tournament that has historically been held in late October. This tournament draws late season tourism that the city and its businesses rely on for a significant portion of their annual income. The tournament proposed to set up a tagging system to account for the fish and a lottery system to divvy out the allocation. To add to the appeal and take advantage of a rare opportunity, there would be a degree of scientific sampling performed as the fish were all landed the day of the tournament. The Gulf of Mexico Fisheries Management Council approved the EFP and to my knowledge set into motion the first-ever program of this kind in the Gulf.

For the first time ever, anglers and the local community were able to work with the council to utilize this fishery in a way that benefitted the recreational fishermen. As one of the charter captains I spoke with after the tournament said, It made our day and our tournament, to be able to add a few nice snapper to our box.

Is this the magic fix for the entire Gulf of Mexico? Of course not. But it does offer an interesting approach to one method of allowing anglers to take advantage of this recovering fishery.
No matter what you or I think; red snapper should be managed whether we agree or agree to disagree on any other issues. It has become clear to me that what we are doing right now is exactly what we have been doing for over twenty years in our approach to how we manage red snapper andit is also clear that it hasnt worked for the fishermen thus far.

Forgive the cliche; but maybe its time we begin thinking outside Pandoras Box.