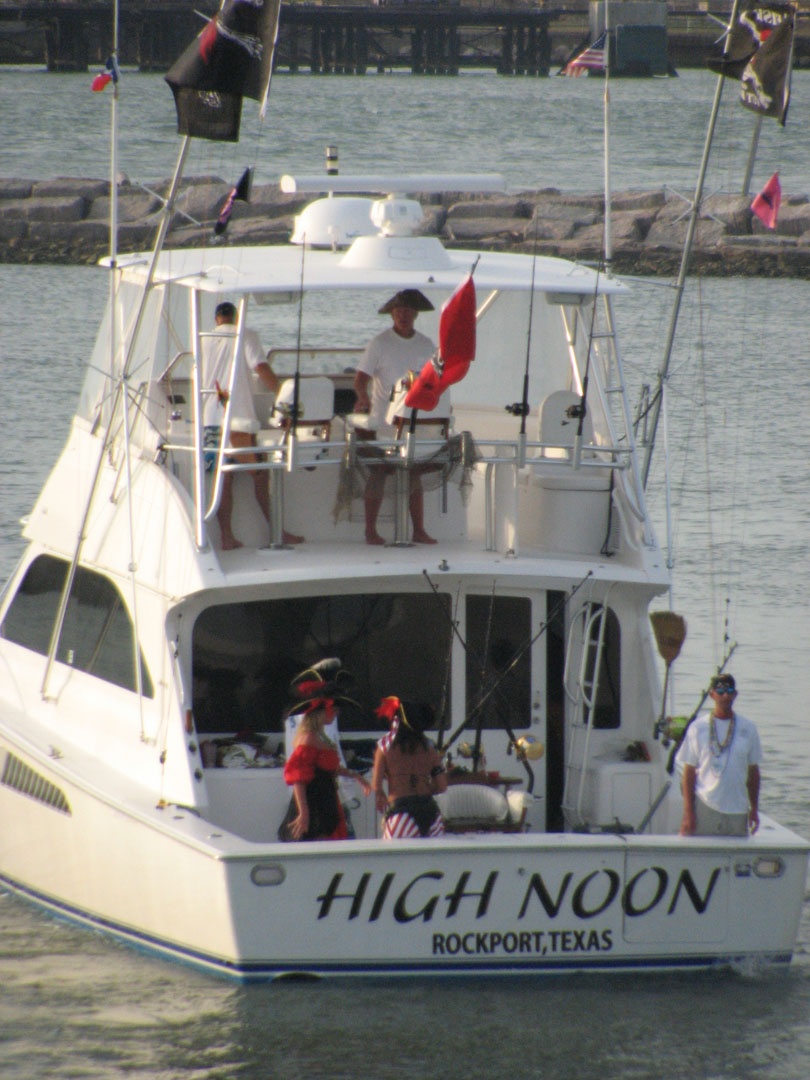 Pirates in Port A!

With skull and crossbones flying, pirate vessels raided Port Aransas recently. Dubious characters included scantily clad females as well as a few Captain Jack Sparrow wannabes. However, it turns out the scallywags were participants in the 12th Annual Texas Women Anglers Tournament (TWAT) and these radicals were more interested in catching fish and drinking rum than raping and pillaging. Nonetheless, there were reports of missing booty.

The First Annual Texas Tuna Mania drew a nominal but enthusiastic group of sixteen boats and a total payout of over $68,000. Largest tuna, 101 lbs. was caught aboard Minno Soda, the Pelagic Slam was won by Six Chicks and the Billfish Release Division was won by Reel Attitude with two blue marlin releases. Surfside Marina provided excellent service to all participants. One of the highlights of the tournament was the dock party sponsored by Hooter's Restaurants. The party began at the weigh-in and finished up with the awards ceremony. The Hooter's girl's provided a colorful addition to the festivities. For information go to www.tunamania.com.

After last month's article on navigation basics we found a few more items that need to be discussed Last night three fishermen were found seven days after their boat capsized well offshore. The Coast Guard had given up searching for them. The Affordable Fantasy a 58' Riviera sportfisher owned by Eddie Yaklin of Kingsville found them floating on their overturned boat near Gunnison Rig, over 70 miles from were they first capsized. It's amazing they made it that long and several factors contributed to this outcome.

One thing they did right was to stay with the boat. It provided freshwater for them and a means of getting out of the water, even if only two people at a time. It's also a larger target to spot, though searchers didn't see them. Perhaps the greatest factor was weather, seas were minimal during their ordeal which definitely helped them last so long.

What they didn't have onboard could have made their situation much less of an ordeal and most likely shorten their stay at sea. They did not have an EPIRB, life raft, handheld VHF Radio or satellite phone. OK, sat phones are expensive and while we highly recommend them, their cost is tough to justify for the average bluewater fisherman. However, an EPIRB (Emergency Position Indicating Radio Beacon) is a must. You can even buy personal EPIRBS to carry on you. This would have shortened their exposure time by allowing searchers to pick up their emergency signal. There is also a GPIRB that contains a GPS and will send out your position. An EPIRB or GPIRB should be standard equipment on any bluewater boat. An overturned boat is difficult for other boats to see, so the handheld VHF is essential. They don't cost much and could have really made a difference when other vessels were spotted. A life raft is very expensive item that is also bulky, but if you are going to run one hundred miles offshore, you should really have one. These guys were lucky the boat didn't sink and it became their life raft.

We understand they did have flares and used them to no avail. Be sure you have plenty of flares and keep them up to date. When you need them, you're going to need them real badso make sure you are ready for an emergency. Every offshore boat should have an emergency ditch kit on board for just this reason. Other important items are water, food and protection from the sun. However unlikely that you will ever need this equipment; it is foolish to leave the dock without it.

Whether selling or looking to upgrade your boat for next season, or for information on Big Game Fishing off Texas, call us or come by Tops-N-Towers in Seabrook, Texas. Our Fox Yacht Sales-Seabrook office has an extensive inventory of brokerage boats and we are the exclusive Texas dealer for CABO Yachts. We specialize in sportfishing boats and motor yachts. Come by and get a great deal on your next boat. For more information check out www.foxyachtsales.com.