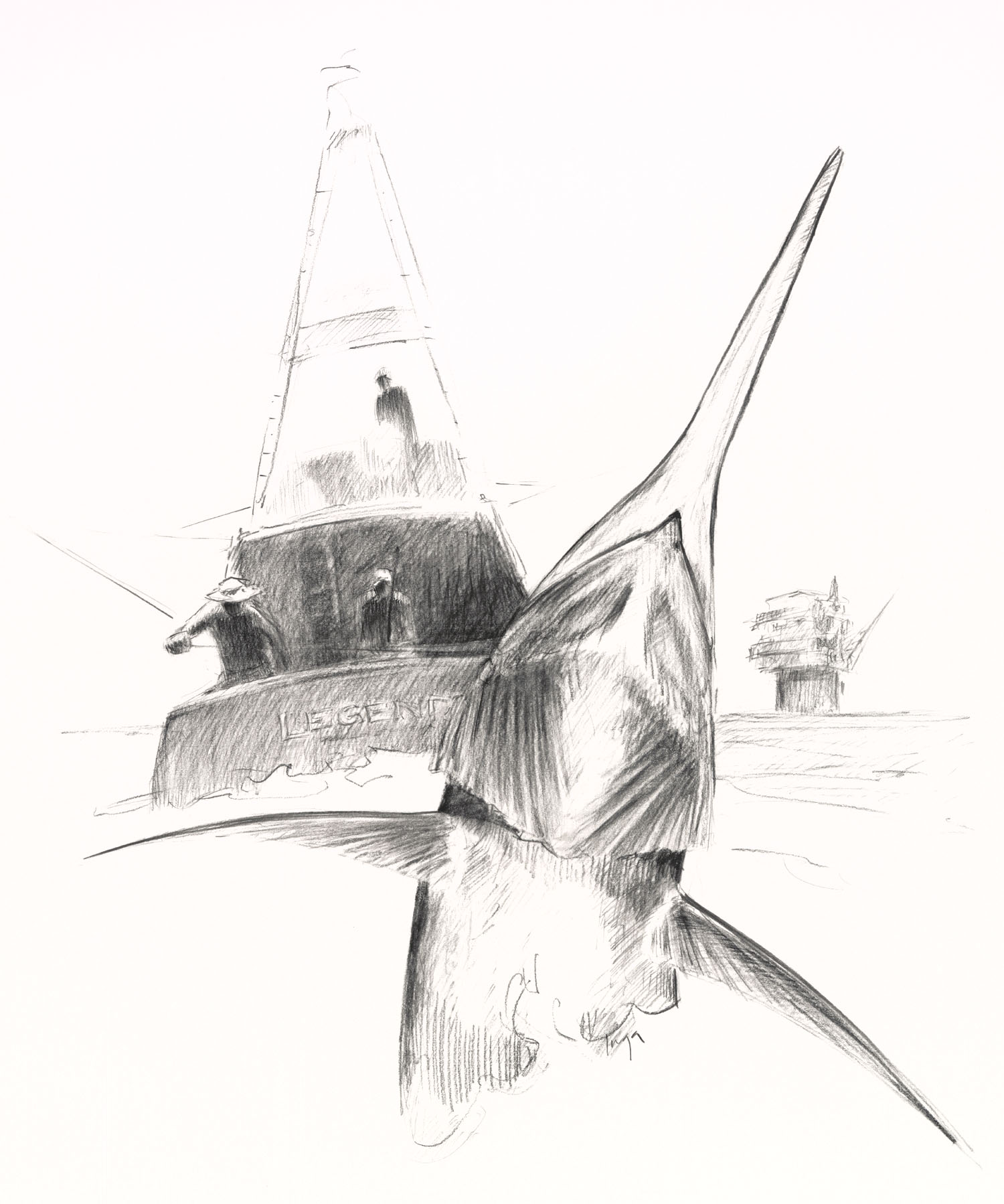 The summer fishing season is in full swing and with cooperation from Mother Nature it looks like we're in for some great fishing. With the first tournaments of the year under our belt, it's obvious there are plenty of fish around. In the 5th Annual Houston Invitational Billfish Tournament held out of Freeport; Brett Holden's "Booby Trap" took top honors with an incredible tournament catch of two blue marlin, one white marlin, two sailfish and two swordfish. That's a grand slam (three billfish species) and super slam (four billfish species) caught during the tournament! Twenty-five boats fished the two day event with total prize money exceeding $280,000. This tournament is quickly becoming a major event in the month of June for Texas bluewater fishermen. Most boats have reported that the fishing is very good around the edge of the continental shelf and shallower this year. Rigs like Little Sister, Cervezas, Tequila and Falcon have been very productive and full of bait.

Sailfish seem to be quite abundant with many anglers reporting multiple strikes and catches. As of this writing, seven sailfish have even been caught at the Port Aransas Jetties! There are not too many places where you hear, "fishing was pretty good, we caught a limit of trout, a few kingfish and, oh yeah, we released a sailfish."

In the Fred Rhodes/Port Aransas Masters Tournament, sailfish were the thing and the "Got'm On" won the event with three sails and a blue marlin. Port Aransas has always been a great place to fish. From the early days of tarpon fishing made famous by celebrities and presidents, to today's fleet of high performance, cutting edge sportfishing boats, Port Aransas is a premier destination for sportfishing in Texas.

One of the main advantages "Port A" has is location. Being centrally located on the coast makes it very convenient for anglers living in Austin, San Antonio and even Dallas. Many upper coast residents in the Houston area also prefer the lower coast with its clear, shallow bays and white sand beaches. Deep water is close to shore and there are several very productive rocks and rigs within a 45-mile run of the jetties.

Sportfishing is a way of life in Port Aransas and you will find more serious fishing boats in this area than anywhere on the coast. It also has a great selection of accommodations, restaurants, bars, shopping, tackle and gear for the visiting angler. Places like the Tarpon Inn, Fisherman's Wharf, Woody's, Virginia's and Trout Street are just a few of the popular spots anglers have been patronizing for years. "Port A" is also home to the largest fleet of charter boats available on the coast. Whether you're interested in bay fishing, jetty fishing, offshore head boats or big game sportfishing, it's all available here. Take time this summer to give Port Aransas a try whether in your own boat or a charter, we think you'll have a great time!

Just a reminder - Don't miss the upcoming Texas Legends Billfish Tournament, August 6-9 in Port Aransas. Last year's event was a huge success with 69 boats competing for over $746,000 in total prize money the largest billfish tournament payout in Texas history. The Port Aransas location is ideal for this bluewater event with boats fishing the entire coast. Join us this year as we honor old friends, catch some great fish and celebrate our big game fishing heritage. Also, later this month, TEXAS TUNA MANIA is going to be held out of the new Surfside Marina in Surfside, Texas on August 20-22. Located at the Freeport jetties, Surfside has quick access to the Gulf of Mexico and is the closest Texas port to the deepwater oil platforms. The tournament will also include fishing for other pelagics, including billfish, but the main emphasis is going to be on yellowfin tuna.

For more information on Big Game Fishing off Texas - buying, selling or rigging your boat, call us or come by Tops-N-Towers in Seabrook, Texas. Our Fox Yacht Sales-Seabrook office has an extensive inventory of brokerage boats and Fox is the exclusive Texas dealer for CABO Yachts. We specialize in sportfishing boats and motor yachts. Come by and get a great deal on your next boat. For more information contact Bobby Byrd at 281-474-4000 or John Cochrane at 409-739-4817 or check us on the web: www.txlegends.com www.tunamania.com