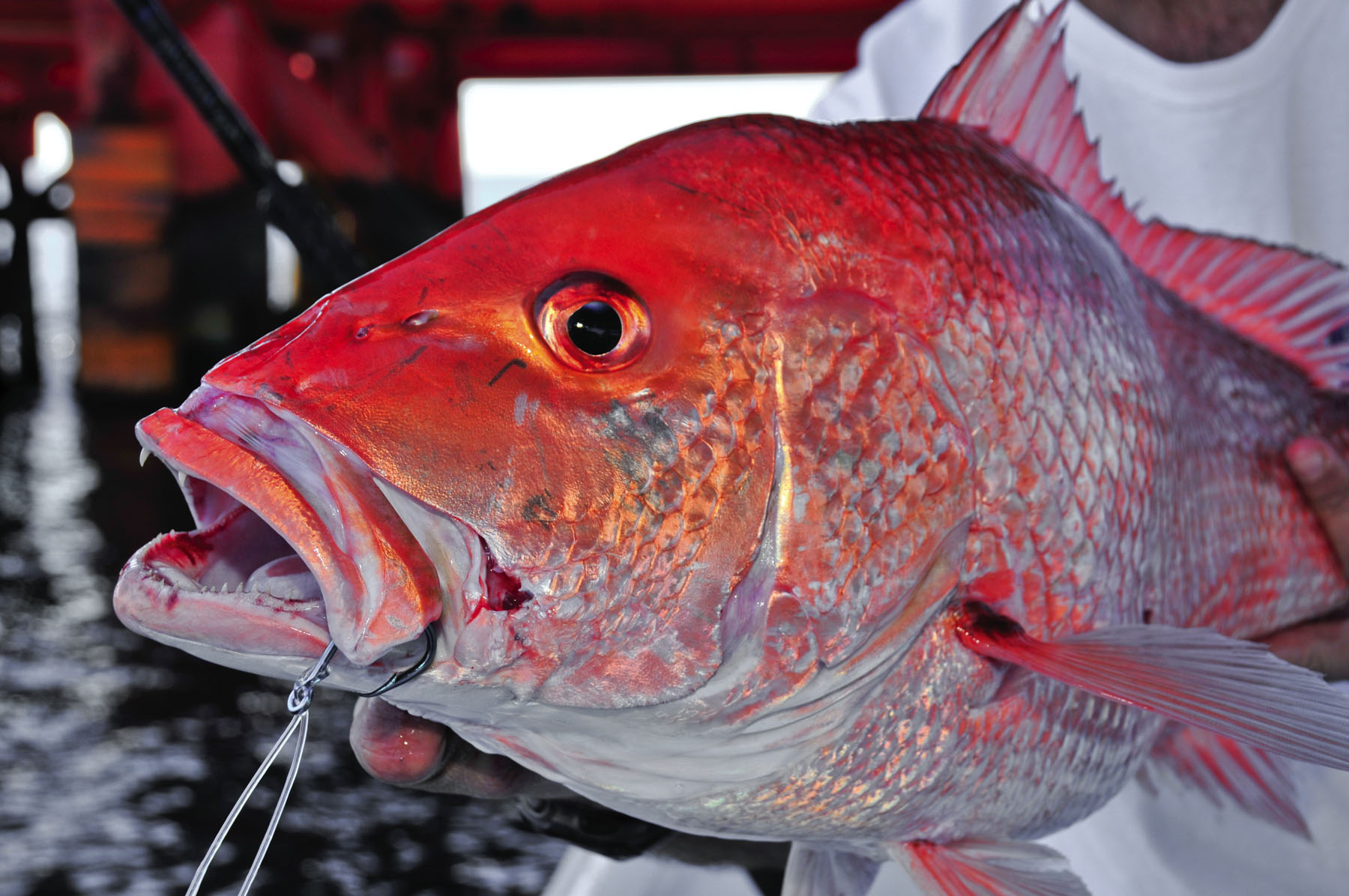 Scott Sommerlatte photo
Red snapper, long prized as table fare by fishermen and non-fishermen alike, have been one of the most popular and economically important reef species in the Gulf of Mexico for nearly 150 years. Seafood lovers almost invariably mention snapper in the list they enjoy most frequently. Sow snapper, the name given to larger mature specimens, are targeted all across the Gulf for their hard fight as well as their delicious fillets.

Commercial utilization of the Gulf red snapper fishery began along the Florida coast near Pensacola in the latter half of the nineteenth century and it is documented that by 1880, 2.0 million pounds were being taken annually. Bringing fresh snapper to market meant keeping them alive in those days and baffled live boxes tied alongside the boats earned them the nickname "smacks" as the boxes smacked constantly against the hull. The advent of ice plants changed the complexion of the industry and it wasn't long before the commercial harvest grew to 8.0-10.0 million pounds. Working the snapper banks along the Florida coast became unprofitable and the search was expanded to locate more productive fishing grounds. The Pensacola Ice Company sent boats as far west as Galveston, Texas but this too proved unprofitable given the scarcity of suitable reef habitat discovered. The era of sportfishing was also dawning and what we now call the recreational headboat industry began to emerge around the turn of the twentieth century.

Perhaps the largest boost to red snapper biomass in the Gulf came on the heels of oil and gas production that began off Louisiana and Texas in the early 1940s. Vast mud flat bottom with almost none of the hard substrate that attracts reef fish was soon to be dotted with production platforms and snapper took to them as though they were natural. The population exploded as did fishing effort.

In the several decades that followed it was widely believed that this fishery was inexhaustible. However, the lack of regulations to specify the size and number of fish that could be taken, coupled with the rapid rise in recreational offshore fishing, resulted in what we now look back on as wholesale slaughter by recreational and commercial fishermen alike. Opinions vary on just how close we came to seriously harming this fishery, but I think most will agree that we underwent a period of overfishing the species and many of us were witness to its changes.

We all have seen the photos of the good old days, mountains of snapper heaped upon the decks of local headboats with smiling anglers gathered round. These very headboat owners and anglers were more than likely the first to see the downturn in size and numbers of our Gulf red snapper.

The first Red Snapper Stock Assessment was completed in 1988 and deemed the species significantly overfished and called for mortality reductions as high as 70%. This assessment set the stage for amendment one of the FMP in 1990. This first amendment set objectives to stabilize the population and form the framework for the first annual TAC (Total Allowable Catch). This TAC would allow for management changes to ultimately begin a rebuilding program for all reef species in the Gulf of Mexico. Amendment-1 set a rebuild target date for the year 2000 and we were told that if we followed the regulation and restrictions set forth we would see a rebuilt fishery by the turn of the next century; bringing this fishery full circle.

The Sustainable Fisheries Act of 1996 would place more emphasis on NMFS to implement a more defined rebuilding plan for the Gulf of Mexico, and resulted in moratoriums to address overcapitalization, attempts to reduce shrimp trawl by-catch, and the elimination of the use of fish traps for harvesting reef fish.

What we didn't know at the time was that NMFS would be plagued with lack of funding, mixed data, conflicting scientific studies, political agendas, lawsuits based on flawed data, and a long list of obstacles that would result in the science then available showing this fishery to remain overfished long after the original targeted rebuilding date. As the year 2000 passed, and approaching Amendment 17 of the FMP, NMFS was still struggling with lack of critical data and what many felt was a lack of desire to stop overfishing in general.

The Magnuson-Stevens Act was reauthorized in 2006 setting the stage for the most restrictive regulations to date, with the most notable change being that it now called for a hard deadline to end overfishing. Eventually, NMFS could no longer just push the rebuilding target date into the future when they realized they weren't going to meet the current goal. Thus began the extreme cuts in season lengths due to what many have viewed as NMFS entering panic mode over the hard deadlines combined with the past twenty years of failed red snapper management.

This all brings me to October 2009. I sat in the Gulf of Mexico Fishery Management Council meeting in Corpus Christi and was witness to NMFS publicly declaring that the Gulf red snapper fishery was no longer deemed overfished, and for the first time since a recreational TAC had been established, we were granted an increase in the TAC for the following year. What this really means for the foreseeable future is still debatable but for this old fisherman it was at the very least an indication that the days of going backward in our ability to utilize this fishery may have finally come to a close. That in itself is a huge victory for the fishery and the fisherman.

In a day of sharply reduced bag limits and shrinking seasons, the Gulf of Mexico Fisheries Management Council has stepped up and given us the opportunity to enjoy a fall red snapper season this year. The reason for this supplemental season, as it is being called, is due to the Deepwater Horizon oil spill which closed down all fishing in a large portion of the northern Gulf of Mexico for the entire summer season. This closure resulted in a dramatic reduction in fishing effort leaving the red snapper recreational quota or TAC unfilled. NOAA Fisheries has determined that approximately 2.3 million pounds of the 3.4 million pound recreational quota remains available.

To us, this means we get to fish out our quota, and rightfully so. The season set by the council is as unique and unprecedented as the reopening of the fishery itself. Our fall season will open beginning 12:01 a.m. October 1, 2010, to be open Friday, Saturday and Sunday only, through 12:01 p.m. November 22, allowing an addition twenty-four fishing days. Although the weekend-only season was somewhat controversial, to me it made the most sense for the average recreational fisherman, especially when you consider the kids are in school and few families are able to fish during the week. This late unexpected season offers a chance to fish for red snapper at a time of year that we haven't had for quite some time and I hope everyone takes the opportunity to enjoy the fantastic fishery that waits just off our shores.