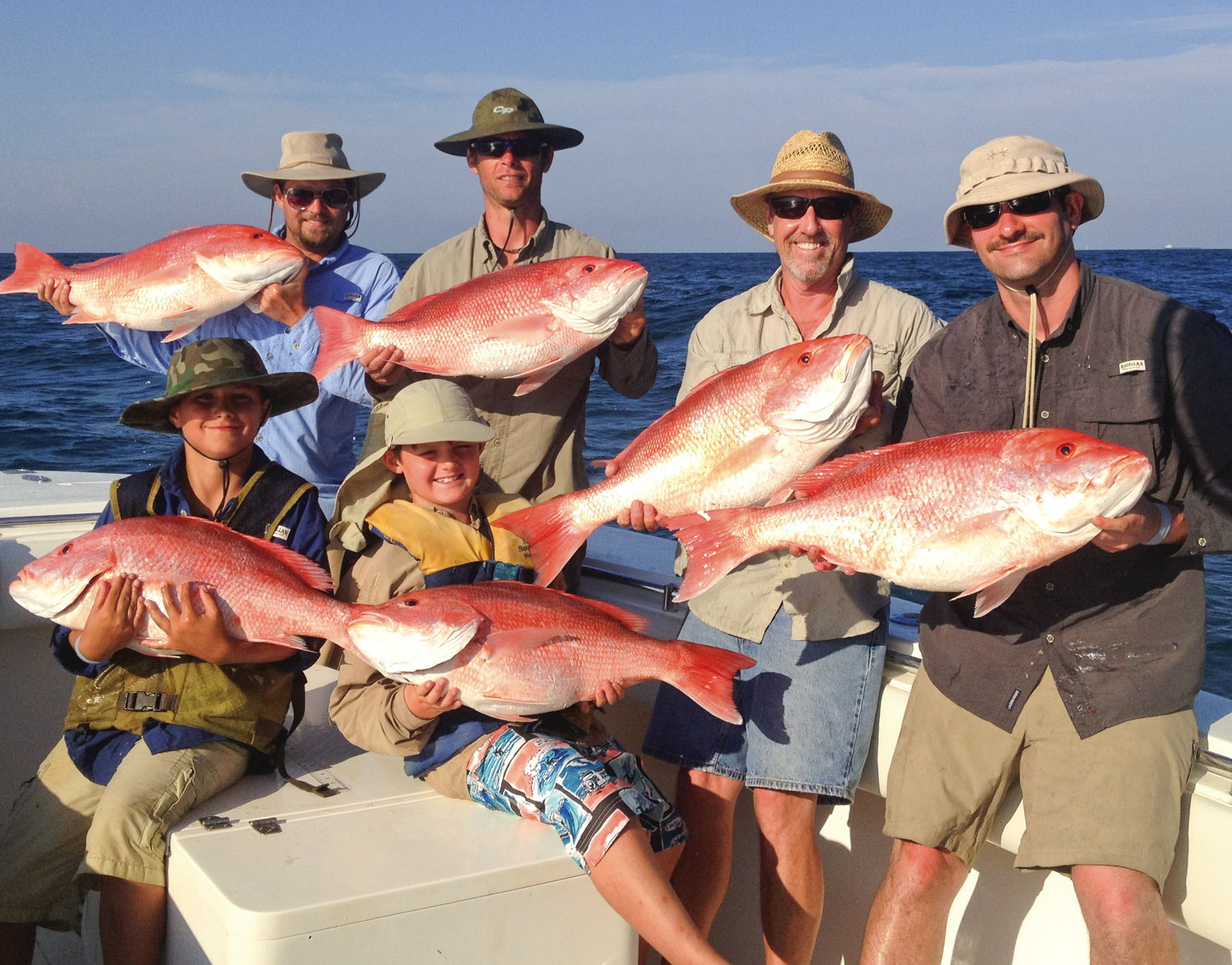 Product of red snapper rebound – June 2012.
June marks the beginning of our summer fishing season. The kids are out of school and the water has finally warmed enough to set the fish into a summertime pattern. The migratory species are here in force and it's the time of year that makes us want to go fishing every day. For the last few years June is also the month that rings in the start of our red snapper season, and with their numbers rebounded to the point they have, the fishing is as good as anybody can remember it.

Actually red snapper are currently in such abundance that they have begun to inhabit places that no one has ever seen them. They have moved into waters all along the lower Florida Coast where they have never been seen or recorded in the history of recreational or commercial fishing the Gulf of Mexico. They have moved into harbors and along jetty systems of our own Texas coastline. I can personally attest to the fact that small red snapper have recently been caught form the South Jetty in Freeport Texas and in the Freeport harbor. And it's not just a Texas thing - I hear similar stories as I travel throughout the Gulf coast.

These recent catches of red snapper, the stories I hear and my own firsthand experiences of catching them in places they don't typically inhabit, has caused me to ponder what this all means for the overall health of our fisheries.
I target vermillion snapper (beeliners) when the red snapper season is closed. One of the things I can tell you from years of trying to perfect the art of consistently catching the finicky beeliner is that even though they inhabit the same bottom types as red snapper, the two species don't necessarily prefer the same places. What I mean by that is red snapper seem to like large structure in about 50 to 200 feet. Beeliners seem to like deeper water, say in excess of 150 feet, and readily inhabit very small pieces of live bottom. When I say small; I have caught hundreds of them off of stuff that didn't mark any bigger than a typical living room end table.

From my experience I can usually escape the red snapper bite when that season is closed by working very small humps lying in anything close to 200 feet. Evidently these pieces of live bottom are just too small to attract and hold red snapper with any consistency yet we find the beeliners stacked on it. I could also depend on the same or similar areas to hold amberjack and some grouper. Now I'm not saying that these places are always completely barren of red snapper, but when you are targeting beeliners and trying to avoid red snapper, this is where I fish.

So, this trend we've been seeing develop so many red snapper in so many places we've never seen them before it really makes me wonder. Other species are becoming more difficult to catch to the point of downright impossible some days while we're overrun with snapper. Is it possible we have been overfishing other species while the red snapper population explodes through over-protection?

I hear people making off-the-cuff comments about red snapper taking over the Gulf. Or jokingly talk about them eating all the other fish out there. While those comments may be a little farfetched they may not be completely inaccurate.

Now understand this - I'm not a scientist or fisheries biologist by any stretch of the imagination, nor have I ever claimed to be, but I don't think it takes a scientist to see that many things have coincided with the unexpectedly rapid rebound of the Gulf red snapper. We have seen the gray triggerfish all but disappear in the western Gulf. We are running further every year to consistently catch amberjack. Blue runners and other baitfish are getting harder to come by with each passing year. All the while we have seen the red snapper filling the void and inhabiting the places these other species no longer seem to exist. With the threat of sounding a little kooky, it's almost as if the comments that refer to red snapper taking over the Gulf may not be all that far off-base after all.

Some may argue that this rapid recovery of a recently overfished species demonstrates the great job done by fisheries managers; but how would they explain the disappearance of the other fish?

Some refer to it as effort shift. Effort shift occurs when fishermen lose the ability to target a preferred species and then shift their effort to targeting another, beyond what would normally be seen if the preferred species was still available. There is no doubt that this has happened. As I mentioned earlier, I am personally targeting beeliners that I hardly ever fished for when we had a six month red snapper season. Can it be that this one simple phenomenon would result in multiple species suffering? I have my doubts simply because the effect has also been seen in fish that are not regularly targeted by recreational fishermen here in Texas. The nuisance triggerfish is a great example.

I think just about anyone can understand what happens when the population of a given species grows to the point where its habitat and typical food sources can no longer sustain its numbers. It either moves and it finds new food sources or it starves and the numbers crash. Have we come to a point of seeing a once overfished species reversed to the point of overpopulation in the western Gulf of Mexico?

It seems that I have a lot of questions and very few answers when it comes to some of the current trends we are seeing in this fishery. This is very likely my lack of formal education on the subject showing itself but, formal or not, I have spent a lifetime on the water learning this fishery though observation. This lifetime education has left me convinced that even the experts involved in red snapper management still have a lot to learn.