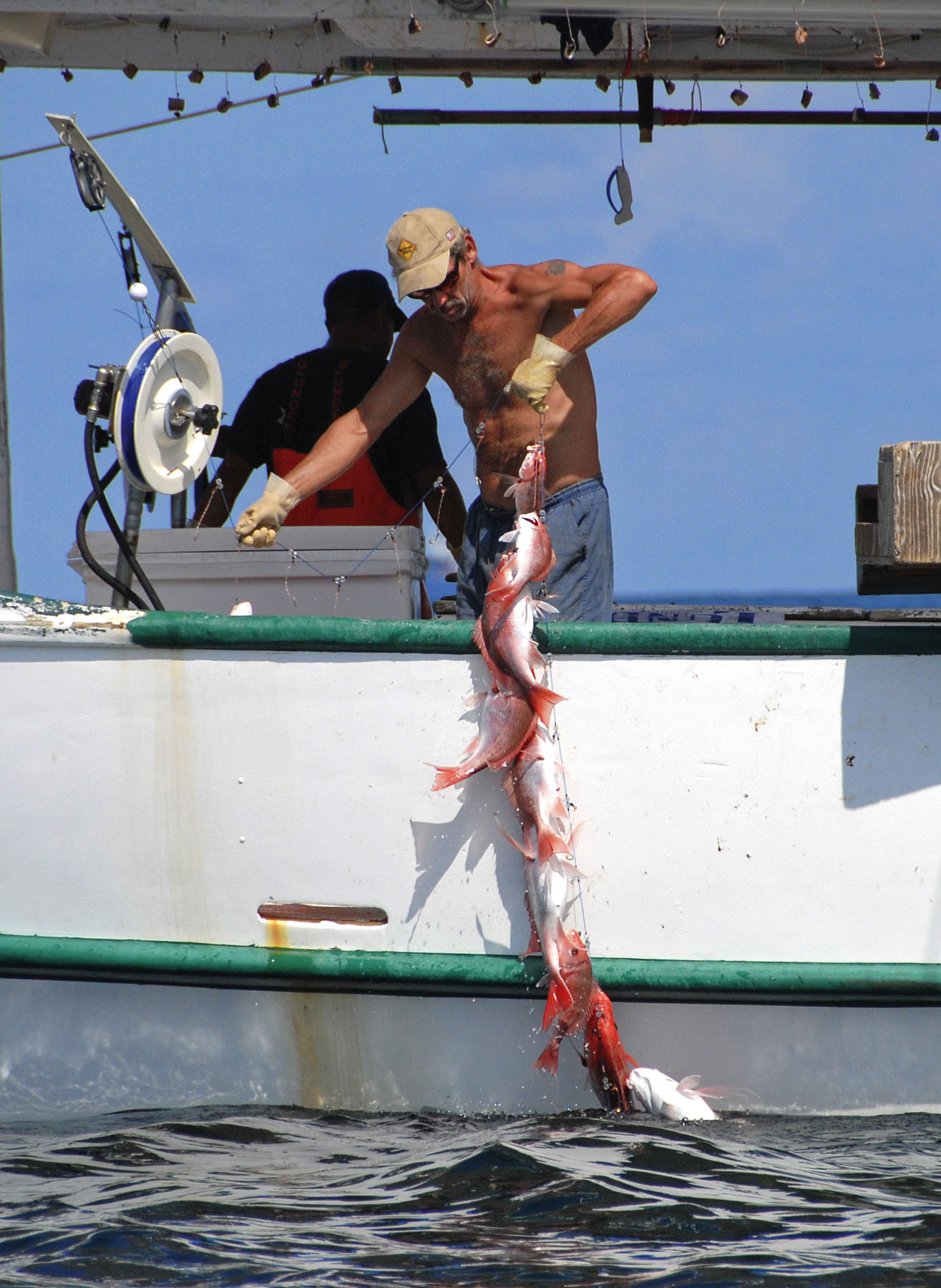 Targeted, smaller snapper pulled aboard a commercial snapper boat based out of Galveston. Less than two dozen of these boats have been gifted with half the Gulf’s entire annual harvest.
Options for this summer's short joke of a snapper season were still being hashed over at press time. At one point it was 11 days, beginning June 1, but that could be changed at any time, and anglers are urged to check before heading offshore. Snapper have become a catch-and-release fishery in federal waters, for all but a few days. Most of the guys I know who fished snapper during the past 40 years have sensibly given it up and now pursue other fish, such as tuna further offshore, or bay fish. Or they golf. Which might be the goal of those who manage snapper in federal waters. At the same time, a couple dozen commercial snapper boats have been gifted a huge share, usually around half of the Gulf's entire annual harvest. That's big money.

There have been sporadic calls for gamefish status for red snapper by the public, but that would be determined by state law. It's a proven technique for conservation, but since recreational fishermen can't sell their fish, imposing the law would only mean the few Texas commercial boats would move a short distance to Louisiana docks.

At this point the only logical step seems to be a crash program, to build perhaps a thousand artificial reefs along the Texas coast, out to nine miles and just within state waters, where they can't be tampered with by federal management. Texas anglers for many years depended on federal waters for snapper fishing, and these fish are now readily abundant. However, NOAA's intrigues and power plays now make snapper fishing in federal waters questionable for all but a few days in June. It's time to roll up our sleeves and build as many heavy-duty, storm proof reefs as possible. Something like Alabama has been doing for more than two decades.

There should be no more depending on the oil industry's offshore platforms and the whims of Washington. Alabama has built thousands of artificial reefs, because they took a progressive stance on snapper fishing more than two decades ago. They've learned how to build good substrate offshore that will resist hurricanes. And the PH of these reefs (preferably limestone) are the best for growing marine organisms in a short time, which then provide cover and habitat for a great many fish species, not just snapper.

Meanwhile Texas fish management has twiddled its thumbs and depended on Gulf platforms and federal waters for snapper fishing. Now that so many of the rigs are gone, especially a vast area off Galveston, anglers have sat up and noticed. However, I have yet to see a full-time Texas contractor who specializes in reef building, while owning a barge, crane and ready-built material. Although Tom Hilton did some good, early reef-building off Freeport.

Alabama has a full-time contractor with his own self-propelled barge and crane setup, who has been building high-tech reefs onshore and delivering them offshore in precise spots for 25 years. Many thousands of sites. So, it would appear Texas is a quarter-century behind Alabama in that respect. His website and informative video can be viewed at: www.reefmaker.net/ We need a rig just like his barge, that can scoot up and down the ICW to haul out heavy loads of the latest reef material in good weather.

Building ideal, pre-cast pyramid forms doesn't take long, but how about hundreds of piles of scrap concrete hauled offshore in the short term? If it contains steel rebar, burn them off with a cutting torch. Concrete rubble should be readily available. We're not talking about a complicated mission to Mars, here.

To its credit, Texas does have a blocked-off area for artificial reefs called the Vancouver site, just south of Freeport, about six miles offshore, where Hilton built his reefs. Vancouver was one of the nine Liberty ships sunk as reefs off the Texas coast in about 1979, the last serious effort by the state to create offshore reef habitat. Inside today's approved little rectangle south of Freeport are a number of small, scattered reefs, within sight of the beach in good weather. But these spots can be heavily fished, especially in summer when boat traffic is high. It's impossible to fish and hide there from passing boat traffic, compared to vast federal waters. Instead, you have to grin and bear it while other boats approach, sometimes within easy talking distance. Even boats without a GPS or depth finder can fish here. The little snapper probably take a beating; they're at the mercy of catch-and-release from anglers hoping for bigger, keeper fish.

"Everybody says TP&W does such a great job," says Capt. Ken Doxie, who runs charters out of Freeport. "But they dropped the ball 20 years ago on artificial reefs, and all they offer today is excuses. Alabama's designated reefing area is 1,200 square miles. Their little coastline, totaling 1.5 percent of our Gulf Coast, harvests 40 percent of all recreational snapper landings."

A sad situation. Texas anglers need more than a thousand square miles of designated reef bottom, stretching from Louisiana to Mexico. Next month I will interview Tom Hilton at Hiltonsoffshore.com to review his ideas about reviving bottom fishing just off the Texas coast.