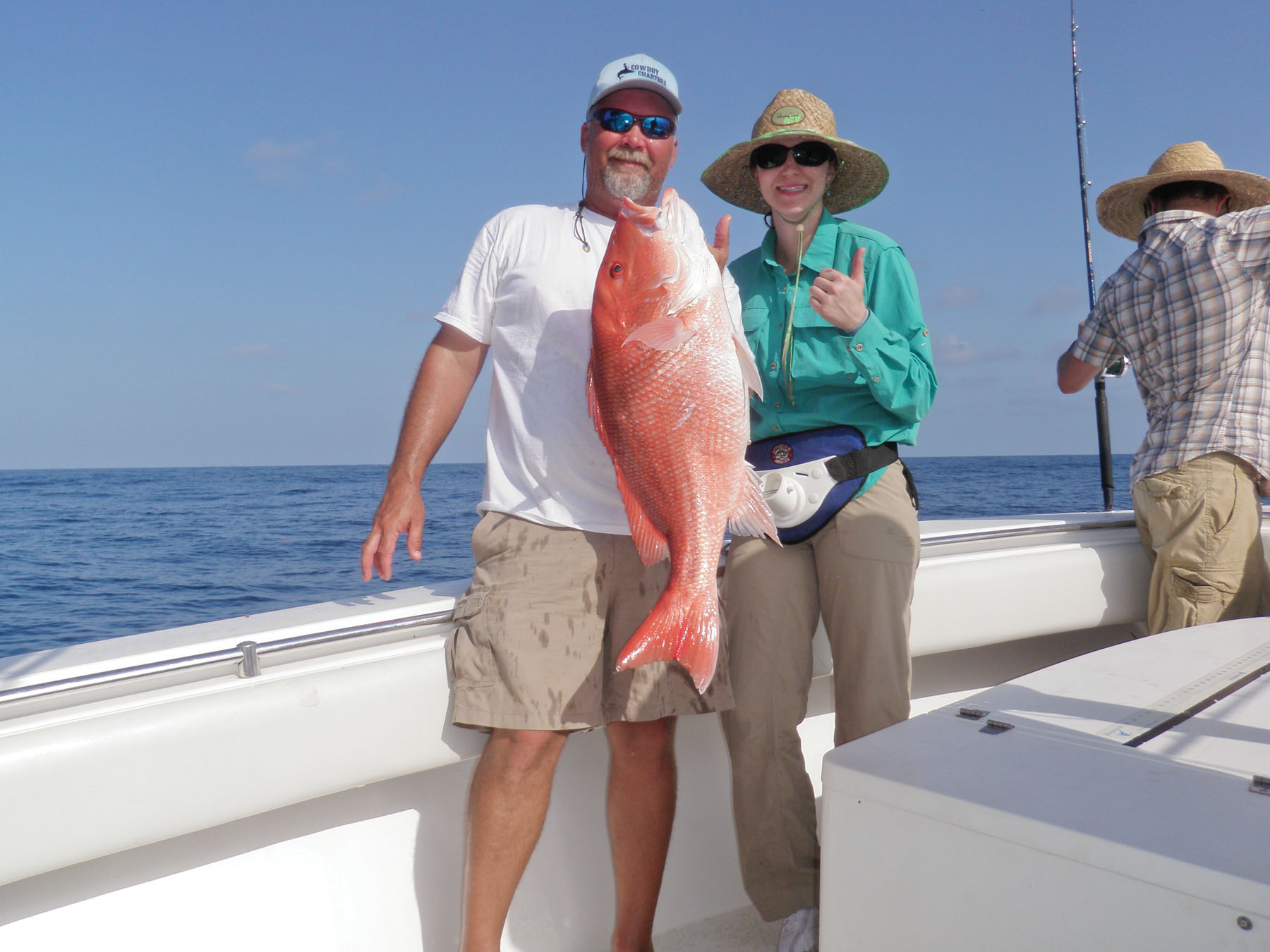 Capt. Jennings hoists a happy angler’s catch for the camera.

As we make our way toward the close of the summer fishing season I am receiving a large number of calls from folks inquiring whether there will be a supplemental fall red snapper season such as we had in October 2010. There has been much speculation, rumor, and confusion concerning a move taken by the Gulf Of Mexico Fisheries Management Council to reevaluate the red snapper landings data for 2009 and 2010, to discover if any discrepancies might have occurred. Once completed, this rerun of the numbers, if you will, resulted in 345,000 pounds being added to this year's quota. This addition to the annual catch limit sparked a wildfire of rumors about a possible fall season that literally took on a life of its own. The blogs and dockside conversations were all about how windy it had been during snapper season, the number of days we lost, and so the speculation grew that with the added poundage we would surely see another late fall season.

To explore this remote possibility, the Gulf Council asked Mr. Andy Strelcheck at the NMFS Southeast Regional Office to work up some early projections on the 2011 red snapper landings with the catch data that was currently available. To nobody's surprise, when the projections were presented to the public at the Gulf Council meeting in Austin during the third week of August, there was little room for entertaining a fall season. Moreover, the projections would show that we may have inadvertently overfished the annual catch limit yet again, even with the added poundage.

This whole issue became even more heartbreaking when the reality set in that, when all the data is compiled, if it is discovered that we had truly overfished the 2011 Annual Catch Limit, we will most likely face an even shorter red snapper season in 2012 – shorter than the 48 day season we were given in 2011. Yes, you read that correctly, our shortest-ever 48 day season may not be the shortest on record much longer. I am by no means a fisheries scientist, but I can run the numbers in my head and comparing them to the last couple of years, I think we will be lucky to break 35 days next year if everything I heard bandied about at the meeting in Austin turns out to be accurate.

So let's examine this whole issue for a moment –

Even though the present management system has helped the resource rebound to current historically high level – and the recreational red snapper annual catch limit has been augmented by 1,355,000 pounds over the last three years – we are facing the reality that in that same time frame this system of management has taken away 72 days of our red snapper season (since 2008).

And then consider this.

Due to the fact that we are now taking larger fish on average, and also due to increased effort (lots of fishermen looking for their share during an abbreviated season) we may end up overfishing our quota for yet another year. And of course, this will lead the fisheries managers to shorten our seasons even further in the future.

Are we confused yet?

Well hang onto your shorts because it gets even better. The Gulf Council is set to conduct a Benchmark Stock Assessment in 2013, which is basically a glorified official fish count if you will; that sets the stage for future management decisions. There is currently a push to move this Stock Assessment up to 2012 and many feel that this count will reveal that the snapper population is far better than the stock assessment that the National Marine Fisheries Service is currently using. (More in line with what you and I are seeing on the water.)

At first this seems like great news; the only problem is that there is no guarantee that even with more accurate stock assessments we are assured any sizeable increases in the annual catch limit for the recreational sector. As I stated earlier, we have had a 38% increase in our allocation the past three years. Yet with the way this fishery is managed the current trend toward overfishing could very well continue.

This brings me to the most recent revelation by the Gulf Council to curtail the perceived overfishing spiral that we find ourselves in. The Gulf Council has begun discussions of using paybacks in the recreational red snapper fishery.

Basically it will work this way if implemented:

When overfishing controls don't work and we continue to overfish our annual catch limit, the poundage that we overfished will be deducted from the subsequent years' allowable harvest. This is your payback. This measure has been used for some time in the commercial fishery but recreational fisherman have been spared from the implementation of a payback fishery thus far. Personally I think it's coming, its just a matter of time.

I will wrap up this whole discussion with one simple question for you to ponder.

What happens if we find ourselves in a position where the payback approaches or exceeds the proposed Annual Catch Limit for the next season?