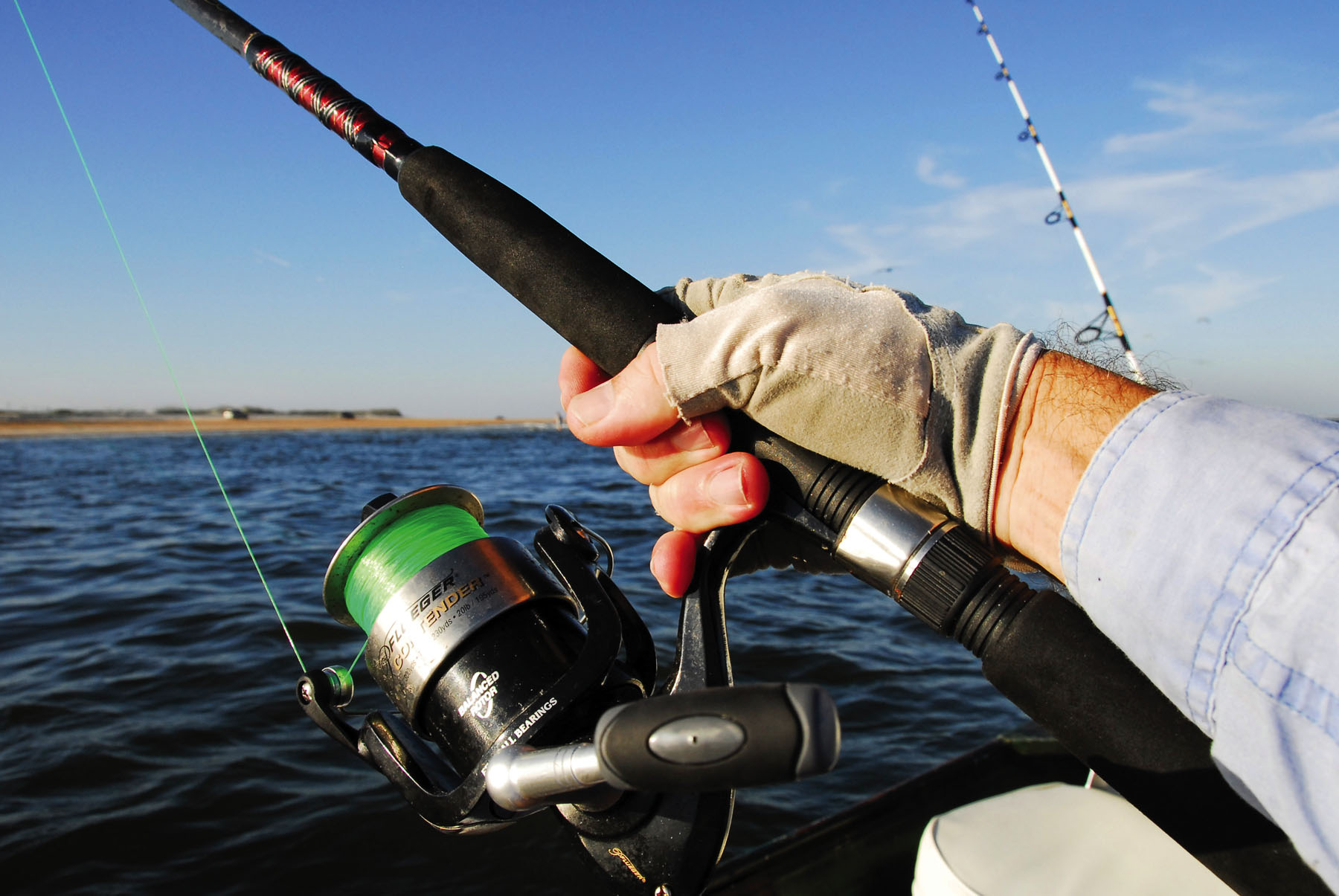 Inexpensive “sailfish outfit” hooked up on something big, just off the Texas coast.

Our modus operandi for many years along the upper and middle coast has always been to see what the day would bring. As one fellow POC guide pointed out, "From day to day, I have no idea what we'll find at the end of the jetties, or just offshore. That water could be chocolate brown, green or blue. When a client asks me ahead of time, at least on the phone, what we'll do out there tomorrow or next week, I just shake my head. How would I know?"

If you were out there the day before you can prepare, but there should be contingency plans. All we can do is slow down at the jetties' end, and take a look around. Chocolate water? Break out the bait, or look for green water on the horizon. Light green water in the rocks? Not too bad. Dark green water? Get ready for action. Rare blue water in close, with kingfish jumping inside the jetties? This is gonna be great...

These different water conditions can change overnight for no reason, and without inclement weather. Windy weather might bring in clear water, while calm may usher in chocolate water; there is no rhyme or reason to life at the jetties.

What's a fellow to do? Stay flexible and be prepared. Carry an assortment of casting outfits, but also a big rod or two, stored wherever possible. We're been burned a few times out there without heavier gear, when big ling surrounded the boat, or big snapper suddenly appeared, and barely beyond sight of land. Or ran into a school of big tarpon migrating along the coast, something impossible to predict. Without heavier gear on the boat, you're only looking at short excitement and heartaches. Why? Snapper and ling are usually around structure, where 12-pound line is almost useless except for smaller fish. As for tarpon, I've never heard of anyone landing a big tarpon on the Texas coast with trout tackle. Hooking one on a Mirrolure is startling, exciting and brief. Stalking a school of bigger tarpon offshore with trout gear, running the boat over these shy fish while others nearby deploy real tackle, should be avoidedit only ruins the action for others. There is simply no chance of landing a good-sized tarpon on light line, except in capable hands on some shallow flat in southern latitudes (South Florida or another country). Texas tarpon offshore can sulk deep like a shark, reflectively chew on that light leader with their huge sandpaper lips, while cruising along until sunset arrives. And nobody stays offshore past dark with a hooked tarpon on spider web line; it isn't worth it. Minimum gear for these fish should be a high-capacity reel with at least 40-pound line, mounted on a stiff rod.

Carrying extra, heavier tackle creates more flexibility with all of these different species of fish. My favorite semi-heavier tackle (though still too light for big tarpon) are several, seven-foot sailfish spin outfits like they use in South Florida. These bigger spin reels in Texas can be filled with lots of tough 25-pound Ande line, and they'll do a sporty number on bull redfish, black drum, most ling, kingfish, bigger dolphin and blacktip sharks, also tripletail. In a pinch around serious structure, I've resorted to adding about 60 feet of 40-pound line, tightening the drag, and really getting mean with the next fish. This same tackle would also be fine on four- or five-foot tarpon rolling at the jetties. Count the Ambassadeur 6500 and 7000 reels as favorites in this category, too.

Flexibility also means keeping an eye on the horizon. On the upper Texas coast, green water is precious and we were never content to sit in muddy water if a dark green line beckoned. (It should be noted we never carried live shrimp or croakers for muddy water fishing). Even in smaller boats we were determined to reach green water, which I've mentioned before. If our Sabine jetty was socked in with milk chocolate, we simply hunted for green water east, south or west, it didn't matter, because green water meant fish, end of discussion. Green water meant trout and Spanish mackerel for our gold spoons, and visually spotting tripletail. Wind direction and wave chops were important factors; we couldn't just bang our way out in head-on seas, not with our smaller boats.

Green water is far more common along the middle and lower third of the coast, but flexibility counts there as well. If clean water moves in close, there's no telling what may show up within sight of the beach. Kingfish jumping inside the jetties, for instance, or a sailfish circling a platform or shrimpboat. With bigger tackle, keep a few seven-inch trolling plugs handy, like the Russellure and Rapala. A few 2-ounce jigs, if Mr. Ling waddles close. And a few Coon-Pop lures for tarpon, along with much-needed 150-pound mono leader.

There's a lot of fish species off the Texas coast, and to catch them you have to stay flexible and carry the right gear. Trout tackle simply will not cover the spread.

SKA is History: For those who fished tournaments sponsored by the Southern Kingfish Association, after a 20-year run they finally folded up their traveling tent during the last week of March. An ailing economy and lack of sponsors dragged them down, matched against the price of a modern, fast, competitive kingfish boat with a price tag of a quarter-million dollars or so.