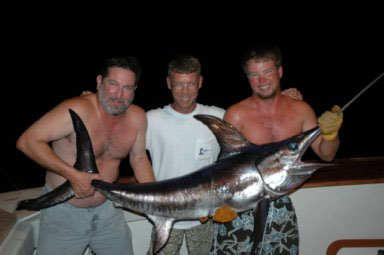 As the groggy angler steps into the cockpit he sees a big splash behind the boat in the moonlight.

Bluewater fishing this summer was the best we've seen in several years. Not only was the fishing good, the weather cooperated most of the summer with light winds and calm seas. There were many reports of marlin and sailfish, plenty of tuna, wahoo, dolphin and swordfish! That's right, broadbill swordfish. There has been a renewed interest in swordfish in the past few years and the catches this summer prove there is a lot to do offshore at night, if you stay out and stay up.

The broadbill swordfish has always been considered one of the top gamefish in the world. Usually spotted tailing on the surface, sportfishing crews would present baits very carefully to these magnificent fish, hoping for a strike. Then the commercial harpoon boats began targeting them and daylight fishing for these fish became a rare opportunity. Later, swordfish were thought of more as a commercial fish species targeted by longliners in the deep ocean. They are a streamlined primitive looking species with a large eye and tremendous bill that makes up almost half of their total length. In the late 70's recreational fishermen found them right off of South Florida's east coast. Using an idea from Cuban fishermen, who use kerosene lanterns when fishing deep water for swordfish and marlin, Jerry and Jesse Webb of Pflueger Taxidermy began experimenting with deep baits and a new invention called a lightstick. The fishing was fantastic and many of the techniques recreational fishermen use today can be attributed to their efforts. Swordfishing at night became very popular and the technique spread to other parts of the world including the Gulf of Mexico. Unfortunately, the longliners also learned how to target swordfish with this method; only they used miles of line and hundreds of hooks. After a few years the Florida fishery collapsed and the interest in swordfishing dwindled, however, in the past three years the swordfish have showed up again and like before, the publicity has sparked a renewed interest in swordfishing in the Gulf of Mexico. From the Florida panhandle to South Padre Island fishermen are trying their luck at fishing for swords and are being rewarded by consistent catches.

The continental shelf along the Texas Coast extends a long way into the Gulf in most areas. Fishermen targeting bluewater species must run a long way to go fishing and it makes sense to stay out overnight and fish the next day to justify the time, effort and expense to get out there. At night you have several options. If you can find a mooring buoy to tie up to, you can spend the night there resting or fishing. Another option is tying to a rig, but you need to stay alert for changing current and wind. The other option is drifting. One of the most popular methods these days is drifting while fishing for yellowfin tuna around the deepwater spar rigs; the other is drifting the deep rocks for swordfish. It's tough to fish all day and all night, so it really helps to have plenty of crew to share in staying up through the night. With more crew you can have shorter watches and everyone gets more rest.

The main concept when fishing for swordfish is to drift several baits at various depths over an area where you think a swordfish might feed. You may vary the depth of your baits according to how bright the moon is, the brighter the moon, the deeper the baits. According to Bret Holden, you want to fish areas that have steep changes in depth, such as a rock or ledge. Bret is the premier swordfish angler on the Texas Coast and maybe the entire Gulf. Since 1990 he has caught 77 swords, way more than anyone else that we know. His success is a result of years of specifically targeting swordfish over any other species. This year Holden has been working extra hard at not only swordfish, but blue marlin as well and as of this writing has caught 18 swords and 17 blues aboard his 46' Bertram "Booby Trap" this summer. That's an enviable season in our book. Holden mainly fishes the area just past the continental shelf from 150 to 300 fathoms focusing on drop offs around rocks like The Hilltops, 130 Fathom Rock and High Spot. Captain Michael St. Pierre likes to get to the area he is going to fish before dark and troll lures around looking for bait, current and birds. This technique paid off this summer at the Hilltops. After seeing lots of action in a certain area before dark, he decided to try for swords there. The result was the "Caliente", a 50' Bertram and owner Doug Shows winning the swordfish pool in the Texas Legends Billfish Tournament with a 61 lb. fish. Captain Mike Horton on the "Gringo Honeymoon" also likes fishing The Hilltops and released two swordfish in The Legends tournament. All of the captains agree that once you get a bite, mark that spot and go back to it, you have a good chance of getting another bite. One note about these and other areas when fishing at night - look on a nautical chart and locate the shipping lanes near the area you want to fish. Many of the rocks just off the continental shelf lie directly in a shipping lane. It is important to keep a watchful eye for ships. We have had them pass way too close for comfort. Whether the helmsman was asleep or just didn't pick us up on radar - we don't know, but you have to watch and be ready to move if one gets too close. Even if not in a shipping lane, someone should be up and watching for vessel traffic at all times.

Squid is the standard bait for swordfishing, but live blue runners are also used and are good at attracting these deepwater predators. Colored lightsticks or battery-powered lights are used to attract the fish to the bait and are normally attached to the leader above the bait with a rubber band or clip. Many boats will also use large submersible lights at the boat. Holden finds the white light attracts bait to the boat the best and uses a squid jig to catch fresh squid that come into the light. St. Pierre makes his own waterproof lights and deploys two at the boat, one on the surface and one down about 30 ft. These lights are encased in plastic tubes and come in many different colors, green and white are the most popular. St. Pierre caught three swords in one night this summer aboard the "Caliente" including a double header and one sword caught after daylight. To get the baits deep, lead weights are used. Normally the bait and lightstick is deployed and then after 60 to 100 ft of line is freespooled out, a weight is attached to the line by rubber band or copper wire. The amount of weight varies with how fast you are drifting and how deep you want your bait. Basically, you have to use whatever weight it takes to keep your bait at the desired depth. Holden likes three baits at 50, 100 and 150 feet respectively. Horton also likes three baits a little deeper at 100, 200 and 300 feet.

St. Pierre likes 50, 150 and 250 feet and attaches a balloon to the line once the bait is at the right depth. The balloon allows the bait to drift away from the boat and helps keep the lines from tangling. When drifting, a sea anchor can be used to slow your drift and can also be used to keep your bow into the seas, if the wind kicks up. St. Pierre has a high-intensity strobe light on his sea anchor, so that when a fish bites, the anchor can be untied and then recovered later.

Whether you are targeting swordfish on a large or small boat we think the minimum tackle should be a 50 lb rod and reel with 80 lb test line. Broadbills are tough fighters and can put the tackle and the angler to the test. Most captains agree that one hook is good for small to medium squid, but Holden uses double hooks when using very large squid. He's fishing for a state record and wants that big bite.

"I had an incredible 13 bites one night and only caught one sword, but I was trying for a big fish and the smaller ones just couldn't stay hooked on that big bait." Holden says.

The Texas state record is 317 lbs. caught back in 1979. Most captains agree that a 15 20 ft. long, 200 to 300 lb leader is all you want for swords. Offset hooks in the 10/0 to 12/0 size work good and Horton has had good luck with circle hooks. You can buy pre-rigged squid, but most crews prefer to rig baits themselves. The hook goes through the eyes of the squid and then the leader is passed through the mantle of the squid and sewn to the bait to keep it attached.

The Gulf of Mexico off Texas has proven to be a great place to catch broadbill swordfish. Many small fish are caught here suggesting the Gulf is also a breeding area. To be legal, federal law requires that swordfish must be at least 47 inches in short length, that's the length from the tip of the lower jaw to the fork in the tail. You must release anything smaller. One thing to remember when boating a swordfish is that the bill is a lot different that other billfish. Instead of being rounded it is flat and sharp like a sword (duh!) and can inflict pain and suffering if handled improperly. Always use gloves and watch out for that slashing bill. When gaffing, try to gaff the fish in the head because swordfish have a relatively soft body and it is easy to tear the hook or gaff out. Gaffing in the head also prevents damaging the highly prized meat. We can vouch for the meat; it's some of the best the gulf has to offer. Our favorite way to cook it is on the grill, basted with a garlic/butter/white wine concoction. Get the fire real hot and sear the fillet about two minutes on each side. Eat immediately while it's hot to prevent it from continuing to cook and get dry. Once you've had a taste of swordfishing, we think you'll be staying out at night a lot more when you are offshore. It makes sense and can be very rewarding.

If you have any questions or would like to learn more about big game fishing in the Gulf of Mexico, give us a call at Byrd & Cochrane 281-474-4000 or go to our website at www.byrd-cochrane.com.

The Legends, held August 10-13th in Port Aransas, Texas was a great success with 36 boats fishing for over $282,000 in total prize money. A total of 20 blue marlin were released along with 5 white marlin and 8 sailfish in the two-day event. The top four boats were: