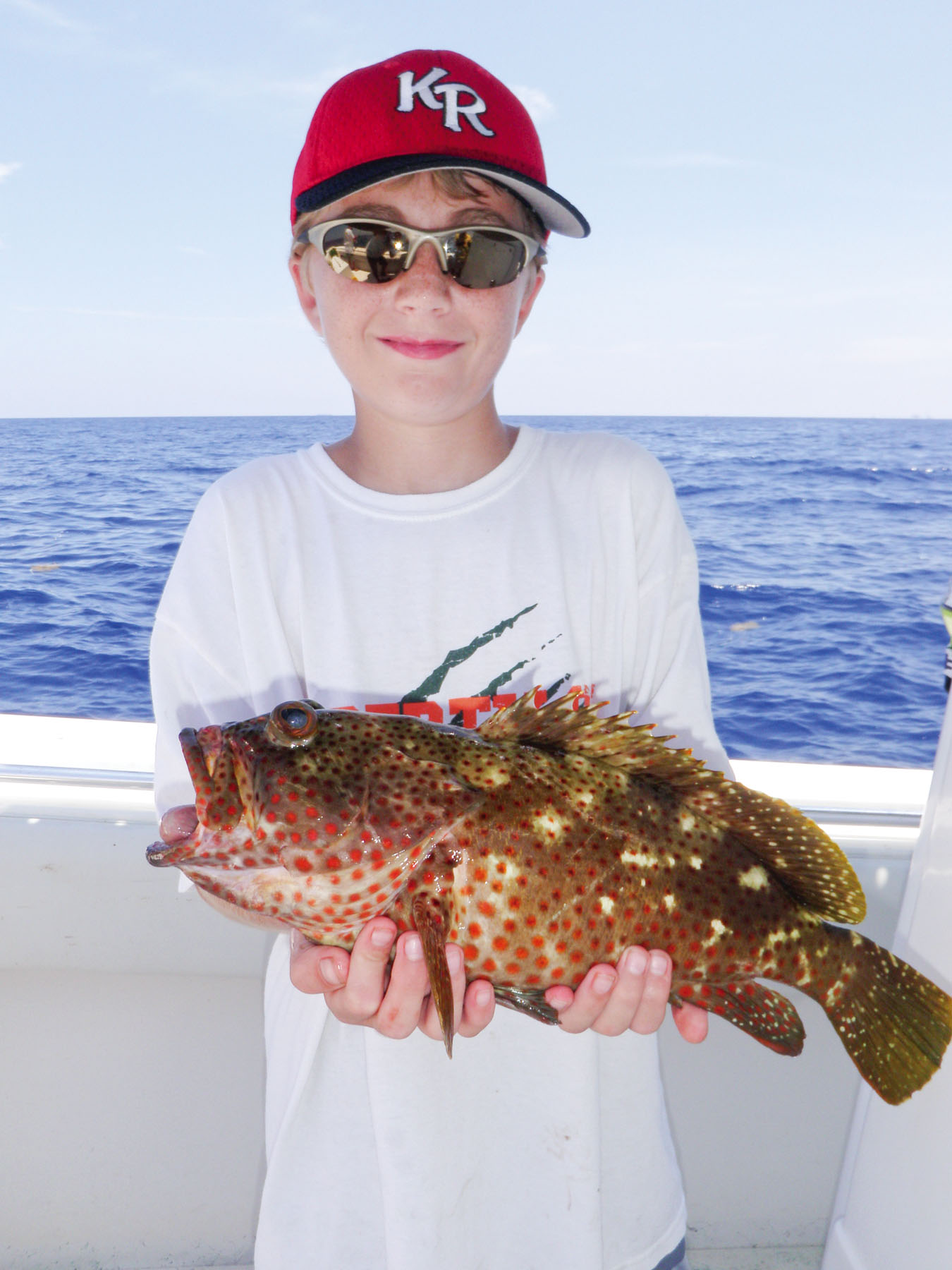 The colorful rock hind is a welcome by-catch when we target beeliners, great eating too!
For the first time in history we find ourselves in the month of July with no ability to keep either red snapper or amberjack. These are two of the fish so many of us enjoy targeting and account for great action on a lot of my summertime charters. There is currently so much going on with red snapper that we can hardly keep up with the changing seasons and regulations. Just a month ago the Charter Fisherman's Association, a Gulf-based group, in conjunction with the states of Texas and Louisiana, won a federal lawsuit that resulted in the abolishment of a rule that was to cost Texas, Louisiana and Florida anglers a large portion of their season. Then the red snapper allocation was increased by almost one third, throwing this year's season into a lot of uncertainty. This whole subject of federal "mismanagement" of our great natural resources is almost enough to make you just want to throw your hands up and walk away.

But not so fast. Even though we would probably most all agree that we should still be fishing for red snapper and amberjack in the month of July; there are other snapper out there that fit just as nicely on the grill or next to those French fries.

I am referring to the vermillion snapper, AKA beeliner, and the gray snapper, AKA mangrove. And while I'm not much on your typical how-to type article; I thought for this one issue I would offer a few thoughts, tips and tactics. I regularly target both of these "alternative snapper" with a lot of success on my charters.
I think it would shock most avid offshore anglers to learn just how often they are right above these two fun and delectable species and never know it. The beeliner likes the exact same structure type as the red snapper; they just like it a little deeper. In many cases they prefer smaller structure that will not attract large numbers of red snapper, which is very handy when the red snapper season is closed. Think of spots you have that lie in depths greater than 170 feet, especially the ones you tend to avoid when targeting red snapper because they just don't seem to hold the larger fish we're always searching for in any decent numbers. Keep in mind as you pull over these spots that if you're not using a bottom machine with at least 1KW capability you may very well never see the beeliners. I sometimes struggle to see them in the mud with a full 2KW machine at times. Trust your structure and check it with baits.

Once you decide to give it a try, forget the subtle approach that you would use for larger and warier red snapper. Put all that completely out of your mind. Downsize your terminal tackle and plan to start deep, at or near bottom. I will usually go to double or even triple hook dropper gear or other rigs, with no larger than a 5/0 circle hook. The standard rig will have the weight on the bottom and hooks suspended above.

With large boats, say like party boat size, with lots of baits in the water, it is common to draw beeliners high in the water column as the baits are being reeled up. On smaller vessels with only a few baits down at a time, it becomes more difficult to draw them off bottom , especially if amberjacks and sharks are present. There have been many days that we caught 20 beeliner per angler limits and every one of them come off the bottom hook with the weight lying in the mud. Beeliners don't care about presentation or size of weight. I typically use a 5 to 6 ounce weight and will go larger if the current forces me.
Bait selection is another issue that just really doesn't matter all that much. Squid is an excellent choice as are small strips of Boston or tinker mackerel. Make your baits small; I usually cut the average squid into sections about an inch wide.

Once you've determined that you're above the fish, it's all about getting baits down as quickly as possible. And once your there, letting them eat. Now that "letting them eat" comment is the one that I see causing the largest problem for the average client angler. The bite is usually a series of short quick taps with an eventual hard bite. The key is letting them work on the bait until they basically hook themselves. I can't stress that point enough or tell you how many veteran red snapper anglers I have seen struggle with hooking beeliners . When teaching people how to fish for them I probably find this one issue to be the most frustrating; often to the point of their losing baits for multiple drops before they ever actually feel the bite for the first time.

The vermillion snapper is as good a table fare as red snapper in my opinion and better than a lot of other fish out there. They are also under-fished by recreational anglers. The vermillion snapper is regulated as a 4 million pound fishery and we have never caught much over 1 million pounds in a year. So the next time you get a chance, let's run those landing numbers up and enjoy a fishery that has been greatly underutilized to date. All it takes is a slightly different approach and a little more patience. I promise it will take only a few successful trips and your skill at catching them will quickly get to the point of making the beeliner a regular part of your daily bag.

Oh, I almost forgot. What about the mangroves you ask? Well, I'll have to tackle that one next time. They're not going anywhere.