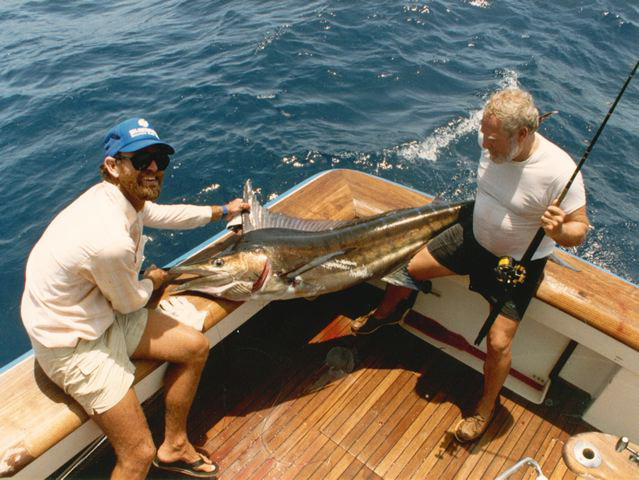 After visiting the International Game Fish Association Headquarters in Florida last spring, we had an idea to create an organization to recognize Texas' great saltwater fishing heritage. With its large coastline and long history of saltwater fishing, we wondered why Texas doesn't have something similar on the state level. After a little research we found a Texas Freshwater Fishing Hall of Fame, but nothing covering saltwater. That was the beginning of our quest to create the Texas Saltwater Fishing Hall of Fame.

The Texas Saltwater Fishing Hall of Fame is being established as a non-profit organization created to recognize Texas fishermen who have made significant achievements in, or contributions to, saltwater fishing. The Hall of Fame is dedicated to promoting and preserving our saltwater fishing heritage through recognition, research and education. We are planning to recognize accomplishments in several categories: Big Game Fishing, Offshore Fishing, Inshore Fishing and Outstanding Achievement.

The Big Game Fishing Category would include fishermen who mainly fish for billfish, tuna and other large bluewater species. Fishermen in the Offshore Category would be those that target species on the continental shelf, like kingfish, ling, snapper, grouper, etc The Inshore Category would include fishermen who fish the bays and near shore waters for trout, redfish, flounder, tarpon, drum, etc... Each of these categories are general categories and are intended to be a guideline for including fishermen in all aspects of saltwater fishing. The Outstanding Achievement Category covers those who have made contributions in other areas such as media, scientific research, tackle innovation, discovery, education, or for any other exemplary accomplishments.

At this time the Texas Saltwater Fishing Hall of Fame exists primarily on it's website www.txsaltwaterfishinghall.com and is headquartered out of Tops-N-Towers in Seabrook, Texas. Our vision is to one day have a stand-alone headquarters and heritage museum somewhere along the coast. The current board of directors includes John Cochrane, Bobby Byrd, Hefner Appling, Will Ohmstede and David Cochrane. A Hall of Fame Committee will select inductees from each category.

The board of directors is proud to announce the 2006 Texas Saltwater Fishing Hall of Fame Big Game Fishing inductees:

Alfred C. Glassell, Jr., industrialist, philanthropist, sportsman and civic leader, has taken a lifelong interest in business in which he is today one of the Gulf Coast's leaders. Considered the World's foremost Big Game Fishing Sportsman, his most famous trophy, the 1560 lb. World Record Black Marlin resides happily in the "Hall of Sea Life" in the Smithsonian Institute of Washington, D.C. An avid fisherman, Mr. Glassell is or was a member of a host of fishing clubs throughout the world. He was inducted into the IGFA Hall of Fame in 2001 and has most recently been appointed to the IGFA Board of Trustees. The Texas angler pioneered the waters off the West coast of South America resulting in the discovery of the abundant fishing near Cabo Blanco, Peru. In 1952, he was captain of the United States Tuna Team in Nova Scotia and served as a member of the team for seven years. Mr. Glassell is still the world record holder for the largest black marlin ever caught, a record that has stood for over 53 years.

Jerry Dunaway began fishing in 1969 and has caught a remarkable 203 Atlantic Blue Marlin, 36 Pacific blue marlin, 96 black marlin, 10 swordfish and an untold number of sailfish, white marlin and striped marlin. His 16 IGFA billfish records are more than any man in history. He was also the first man to capture an Atlantic blue marlin on 4 lb. and 8 lb. line. Jerry was the first man to catch a "Super Grand Slam" (a blue marlin, white marlin, sailfish and swordfish in one day). From 1987 to 1999, his 48 ft. gameboat "The Hooker" and 110 ft. mothership "The Madam" fished throughout the Atlantic and Pacific Oceans. Jerry has won many Texas billfish tournaments over the years and in 1984 was Marlin International Angler of the Year. From 1987-1991 he was named one of the World's "Top Ten" anglers. He most recently received the 2005 IGFA World Record Lifetime Achievement Award. Jerry is a life member of the International Game Fish Association and Coastal Conservation Association.

Deborah Dunaway started fishing in 1985 and has fished all over the world. She has caught a unprecedented 23 IGFA billfish world records more than any angler in history. Deborah is the only angler to catch a world record in every species of billfish and in 1993, she became the only angler to hold current records in all 9 species at the same time. She is one of the top five female record holders of all time. In 1993, she was the first person to receive the IGFA Angler of the Year Award. She most recently received the 2005 IGFA World Record Lifetime Achievement Award.

Captain Bill Hart grew up fishing the coastal bays and surf near Port Aransas, TX. After returning from WW II, Bill used his naval experience to acquire his captain's license and began operating commercial snapper boats and crew boats year-round. In 1968, he bought his own boat and started charter fishing. His knowledge of the offshore reefs and fishing grounds paid off with great success and made him a popular captain. The name "Capt. Bill" became a byword in the charter fishing industry. Over the years, he operated private yachts for various individuals and traveled extensively on his "tournament trail." Soon the fame of "Capt. Bill" was known throughout the Gulf Coast, Bahamas and Caribbean. His well-known "raspy" radio voice became unmistakable to a multitude of anglers. Bill ranks at the top of successful captains, winning countless tournaments including two wins at the prestigious Poco Bueno Invitational. He remains active in both inshore and offshore fishing and when you hear the hoarse cry "hooked up!" you'll know who's got him on the one and only "Capt. Bill" Hart.

These inductees received their awards on Saturday night, August 12, 2006, at the Memorial Dinner during the Texas Legends Billfish Tournament in Port Aransas, Texas. This was the inaugural event for the organization and it was well received. Congratulations to this year's Big Game Fishing inductees. Since the organization was formed late in the year, other categories will be awarded later this year or in 2007.

If you have any questions about the Texas Saltwater Fishing Hall of Fame or would like to learn more about big game fishing in the Gulf of Mexico, give us a call at Byrd & Cochrane 281-474-4000 or go to our website at www.byrd-cochrane.com.