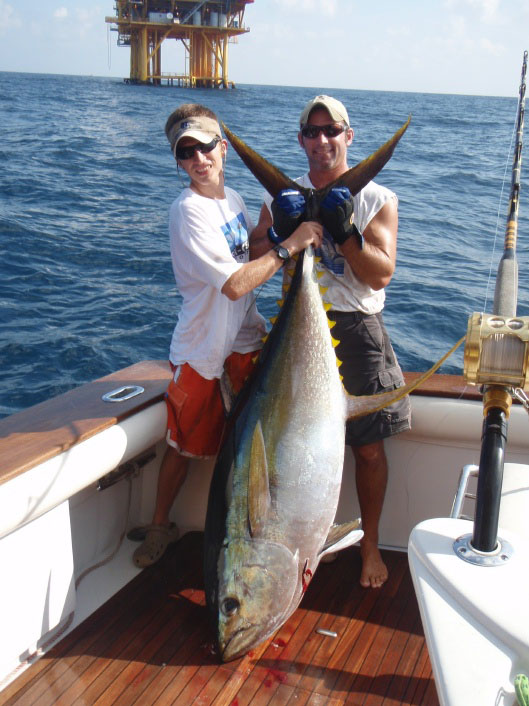 Tuna fishing off the Texas coast has always been very productive. Before the introduction of offshore oil platforms, these fish were mainly caught around deep rocks, current lines and drop-offs along the continental shelf. Now with deepwater oil production platforms scattered across the Gulf of Mexico, tuna concentrate on the bait that is attracted by these structures. For the bluewater fisherman it is a fantastic opportunity to catch big tuna consistently, despite the fact they are located quite a distance from shore.

Many species of tuna are found in the Gulf, but the yellowfin and blackfin tuna are the most prolific. Bluefin and bigeye tuna are very rare, so the yellowfin is the largest tuna caught consistently and happens to be one of the best eating fish in the ocean. Fishing techniques for yellowfin vary from drifting dead and live bait to jigging iron, casting surface poppers, kite fishing and normal trolling. Some of the best tuna fishing is at night, yellowfin tuna love ambushing flying fish that come into the lights around the boat. During this time they feed closer to the surface and can be easier to catch. Daytime fishing can be very good also, especially when the tunas are on the surface. A surface strike is awesome to witness and is well worth the trip offshore!

During the summer, there are many big game tournaments along our coast concentrating on billfish. In fact there is one just about every weekend! These tournaments have tuna and other pelagic fish pools, but the main focus is on billfish. Well, we decided it was time for a different kind of tournament - one that focused on the great tuna fishing off our coast.

Texas Tuna Mania is what we named it and it's going to be held out of the new Surfside Marina in Surfside, Texas on August 20-22, 2009. Located at the Freeport jetties, Surfside has quick access to the Gulf of Mexico and is the closest Texas port to the deepwater oil platforms. The tournament will also include fishing for other pelagics, including billfish, but the main emphasis is going to be on yellowfin tuna.

There are three divisions in the tournament Yellowfin Tuna Division, Pelagics Division and a Billfish Release Division. To enter the tournament you must pay the entry fee and you must enter the mandatory $500 yellowfin tuna pool. After that, you can enter any pools in any divisions you desire. In the Yellowfin Tuna Division, each pool will be determined by aggregate weight. The boat with the most pounds of yellowfin tuna wins, only the largest three yellowfin per boat will be weighed.

In the Pelagics Division we have created the Pelagic Slam. The winner of this pool is determined by the combined weight of three fish including the largest yellowfin, wahoo and dorado per boat. Other pools in this division are for largest fish only. The Billfish Release Division is similar to many other billfish tournaments and is video release only. This tournament is also suppose to be fun so there are not a lot of angling rules to follow. We call it Jungle Rules! You must use a rod & reel and boat the fish by hand or gaff, other than that, anyone can handle or touch the rod. The main idea is to go out, catch some fish and have a great time. For more detailed tournament information go to www.tunamania.com.

Registration headquarters is at Tops-N-Towers, come by and find out more about the tournament and big game fishing or rigging your boat. Looking to buy or sell a boat? Check out the Fox Yacht Sales website at www.foxyachtsales.com or you can contact John Cochrane at [email protected].