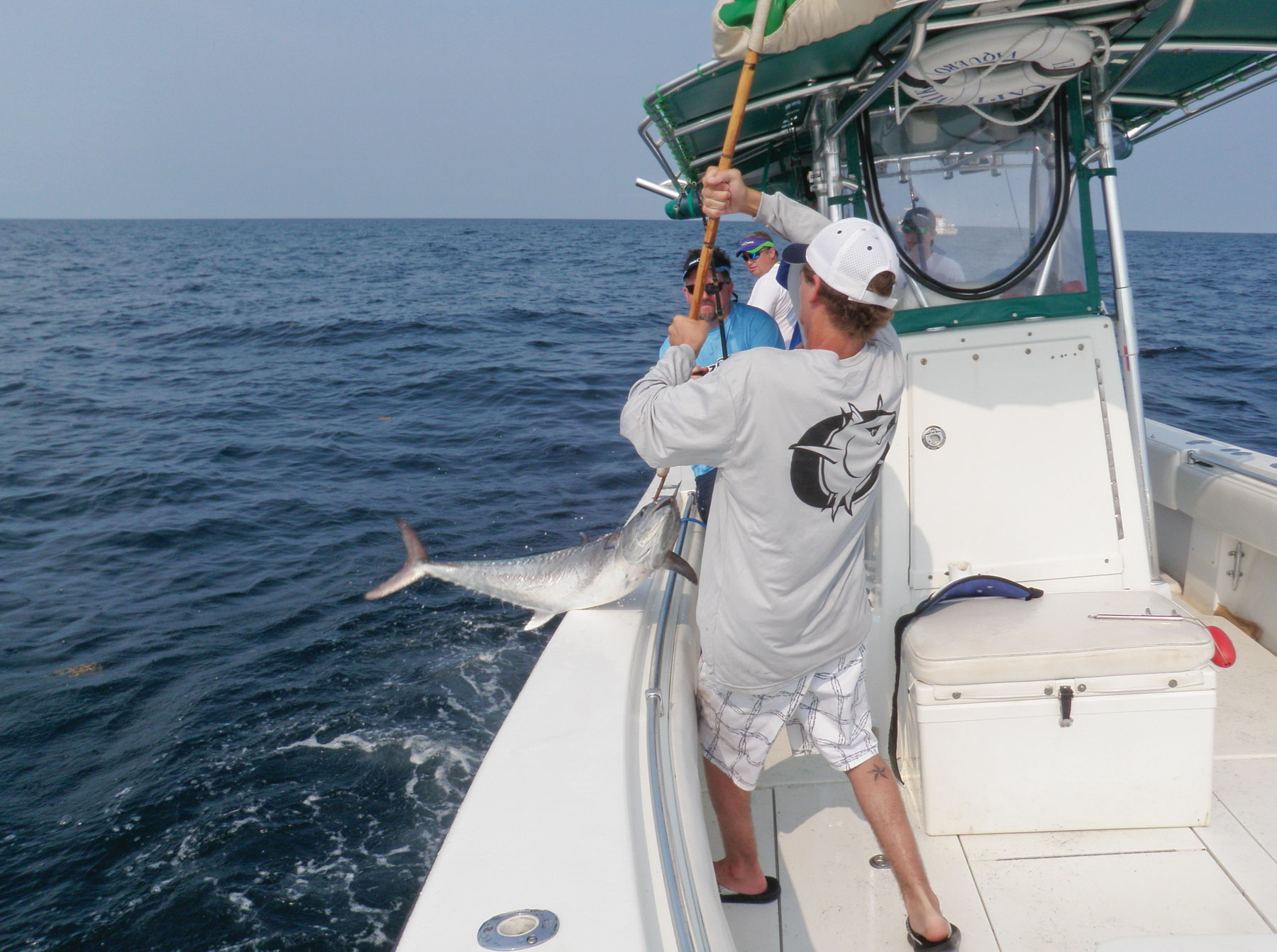 A nice king comes aboard.

Strike up a conversation with just about anyone who has fished off the coast of Texas and you are likely to hear a tale involving the King Mackerel - kingfish as it is normally called. The kingfish is probably one of the most common fish caught just off our shores. Due to its large population and tendency to roam close to shore it is also among one of the first species caught by novice anglers in their early quests for offshore adventure.

The King Mackerel is a sub-tropical species of the Atlantic Americas that typically ranges not only in the Gulf of Mexico, but from North Carolina to well south of Brazil. There are reports of kings being caught as far north as the Gulf of Maine. Although I know of areas off our coast that hold kingfish year round, they are considered to be schooling fish and highly migratory by nature. There are two known migratory groups. The Gulf group ranges from Texas in the summer to as far away as through the Florida Straits arriving along the middle-east coast of Florida in November. This group spawns generally in the Gulf of Mexico throughout the summer months. The Atlantic group is abundant off North Carolina in spring and fall, migrating to southeast Florida where they spawn from May through August. Tagging results indicate this group winters in deep water off the Carolinas.

Very little is known about the king in its first year of life, except that it will reach a weight of about 3 to 4 pounds and grow as heavy 20 to 25 pounds by age seven. Any fish reaching over about 20 pounds is most likely a female. The kingfish can grow as long as 70 inches and reach weights approaching 100 pounds, with anything over about 50 pounds being considered quite respectable by most any avid angler. The current world record king is a 93 pound specimen caught at San Juan Puerto Rico on April 19, 1999 by angler Steve Peraz Graulau.

Kings can be found around just about any structure or condition that is holding baitfish, as well as in open water where they follow the movement of menhaden during the late summer. They are basically opportunistic feeders taking advantage of a variety of schooling fishes, squid, shrimp and even known to feed on certain mollusks at times. The larger kings seem to become more specialized feeders preferring finfish in the 4 to 8 inch range.

I would venture to guess that by far the majority of the kings caught in the western Gulf are caught on and around offshore oil and gas platforms. There are several platforms in the areas I frequent where my clients land hundreds in a single month.

To me the kingfish seems to be the victim of a love-hate relationship with local fishermen. Newer anglers to the sport seem to love them because of their sheer numbers and the fact that they are often easy to target and catch. More seasoned anglers seem to dislike them or consider them sub-par for the same reasons.

To me fishing is about spending time on the water and pitting your wits against the fish. Make no mistake, kingfish can "get lockjaw" as they say and be just as challenging as any fish out there when conditions are not ideal. We see this often during the days of the full moon. It is these tough days, when I have to knuckle down and dig them out, that I think I end up enjoying the most. I often hear people at the dock talk about how the kingfish are gone, virtually vanished from where they had been plentiful on the last outing. It is more likely that the fish were still there and just didn't cooperate.

We humans are creatures of habit. We brand a species such as the kingfish as an easy adversary or underestimate their nature as a survivor and we are quick to blame unknown conditions or unexplained movements as the reason for our lack of success. Many never even stop to consider that their feeding habit may have changed temporarily and because they did not change their fishing tactics they simply were not able to catch them that day.

I can't even count the number of times I have heard someone say that kingfish are easy; all you have to do is use this lure or rig a bait this way and you will catch all you want. Well - that single-minded approach was their first mistake. Their second was thinking the fish weren't there because they didn't catch any.

When I pull up to an area or piece of structure and tell my customers that we are targeting kingfish they almost instantly ask how we are going to fish for them. I get some funny looks when my answer is, "I'm not sure yet." I then just smile and say, "But I'll let you know as soon as I figure out what they want today"

I usually start with the simple approach consisting of drifting baits like sardines or ribbonfish. If it doesn't work I will slow them down, or speed them up. I may add weight to pull them down or back down on my lines to make them sink more rapidly. Eventually, I may find they will bite just as I engage the motors and start the baits moving again. On many occasions I will catch them consistently on only one side of a platform. It may be the up-current side today and the down-current side tomorrow. I may find success at literally skipping the baits on top, or holding in the current with the baits virtually motionless. If all else fails I may go to deep diving plugs or fast trolling jet heads.

Sometimes they will eat everything you put in the water and seem to almost jump in the boat. The next time the difference in success and failure may be as much as a subtle difference in the speed that a bait falls through the water column. Figuring out that minor subtlety and exploiting it is what will separate you from that angler that underestimated the ever-abundant kingfish and overestimated his confidence and ability in just how easy they are to catch.

I have learned to always ask myself, "What am I doing wrong here" before asking, "Where did they go?"