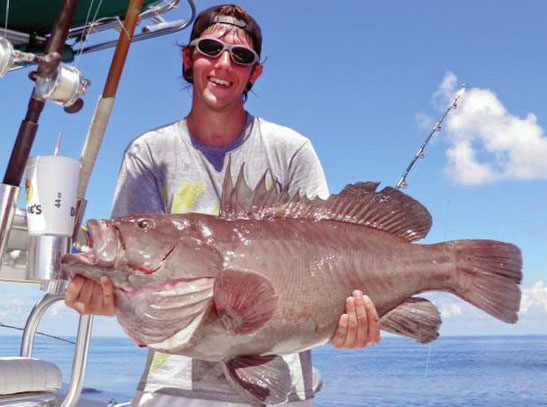 Long about spring break lots of folks get the fishing bug. Even though daytime air temperatures will be pleasant most of the time, water temps do not warm as quickly making for a few more weeks of winter-style fishing. Speaking of winter fishing, this winter brought another stellar wahoo and grouper bite. From a fisherman's point of view wahoo numbers are currently as good as ever, world-class some say, and the bite should hold strong for another eight weeks or so as they move in off the shelf to their shallower spring time pattern. With some species going through what seems a decline in overall numbers the wahoo fishery off the upper Texas coast is a blessing. The only downer is that most of the winter hotspots lie in excess of 100 nautical miles from either Freeport or Galveston. However as the days lengthen and the water temperature begins to rise, they will move to within easier reach.

Most avid offshore fishermen are familiar with the places where kingfish begin to show up first. Places with large scattered live bottom in the 150 to 180 foot range. As these kingfish begin to show, the wahoo will too. The trick to targeting wahoo amid kingfish is presenting baits that kingfish don't want to tackle, but even this doesn't always work. There are times when no matter how big you go the kings still crash the party.

I am still of the opinion that there is no bait like live bait when it comes to large predators and live is always my go-to when I can put my hands on it. If its not available, or the kingfish dine on it before the wahoo get a chance, don't hesitate to experiment with anything that you can pull in excess of about seven knots. While slower baits will defiantly catch wahoo, it has been my experience that slower presentations trigger more bites from the kingfish when they are thick and aggressive. With that said, if you are convinced the wahoo are there; throw everything including the kitchen sink. I have fed a dead sardine to many wahoo eating chum at the side of the boat. As with mackerel in general the only definite rule is that there are no rules, only preferences on a given day. The worst mistake you can make is sticking to one bait or one approach simply because it worked the last time.

Springtime also brings thoughts of the yearly migration of cobia that is just around the corner. Everyone's eyes will be on Florida as we move forward to see what the numbers are like this year. Last year's migration was concentrated in and about the Mississippi Delta when the Deepwater Horizon blew and for the most part they never seemed to make it to the Texas coast. During early June I usually catch four or five cobia a day. Last year I struggled to even see four or five a week. We can only speculate as to whether the oil spill killed a portion of the cobia population or if it just altered their pattern for the year. We can't even get a decent read on how many fish stayed east of the Mississippi due to the fact that no one was fishing over there. I am looking to the early cobia tournaments along the Florida Panhandle to be a gauge this year and I will be doing so with my fingers crossed, hoping to see reports of good numbers more so than who walked away with a paycheck.

Another notable change to keep in mind as we go into this year will be the recreational closure on gag grouper. NOAA Fisheries Service announced a temporary rule effective January 1, 2011 that set the recreational bag limit for gags at zero. Gag is considered overfished (population too low) and undergoing overfishing (rate of removal too high.) The Magnuson-Stevens Fishery Conservation and Management Act requires that overfished stocks be rebuilt and that overfishing be halted. The Gulf of Mexico Fishery Management Council requested NOAA Fisheries Service implement this temporary rule to address overfishing while they developed a long-term rebuilding plan. The Council stated from the start that it was their intent, when requesting this temporary rule, that there should be a recreational harvest of gag in 2011; however, this season will be developed in future amendments. Thus we are left with a closed season until the amendments take place. I am optimistic that we will see some sort of recreational season set for 2011 during the April meeting of the Gulf Council in Orange Beach, Alabama. This is my glass half full talking here, but in light of the fact that the commercials will be allowed to harvest a 100,000 pound quota in 2011, I don't see the council sitting on their hands for long.

With all the uncertainties in our seasons and speculations of the oil spill impact on the long-term health of our fisheries, we have to wonder where we are headed. Well, I know where I'm headed. I'm headed right out the end of that jetty at every opportunity to enjoy one of the strongest and most diverse fisheries on the planet. We may face some challenging times ahead as we balance our fishing opportunities with our long-term conservation goals, but it is all part of keeping this fishery strong for the foreseeable future. If last summer's stellar fishing, even during the height of the oil disaster, was any indication of what we can look forward to this year, we are in great shape.