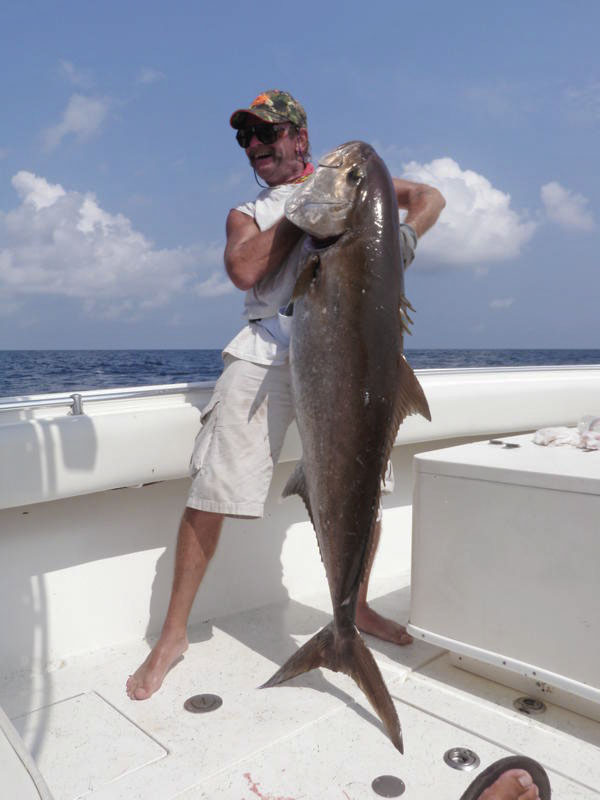 Solid amberjack.
With what many see as obviously flawed management programs and constantly changing regulations in the offshore fishery, along with the lack of what some feel is fair and equitable treatment of recreational anglers, I can't help but wonder what lies in store for us as the 2011 deadline approaches to end all overfishing. This deadline was set by congress in the 2006 reauthorized Magnuson-Stevens Act. As the peak of this year's offshore season passes, I consider what we as recreational anglers can do to lessen the strain on some species that are designated as being currently overfished or in danger of being overfished.

Words like conservation and sustainability are at the fore of every fishing-related organization's media messages. Being good stewards of our resources is something that I believe every good sportsman can understand and this is evident from the sheer number of people that join and volunteer their time to fundraising for various causes, cleaning beaches, dune projects, fisheries management and an unending array of worthwhile projects to benefit our coastal habitat and fisheries. With that in mind, what does this mean to the average recreational fisherman? How can we do our part to conserve the resource for future generations?

I recently received a call from a gentleman that set me to asking myself these very questions. It was a typical call that began with pricing and availability. As the conversation turned to what he wanted to target or expected out of the day, he named off about eight species that he expected to catch in a single outing, ending with, "I'm looking for a major meathaul." While that in itself may sound reasonable to a point, it made me wonder about how we as recreational fishermen approach our fishery and to ask myself just when is enough, enough?

Typically we judge the success of fishing trips by how many fish we can pack on ice, or whether we can claim largest fish bragging rights. Rarely do we consider what these so-called daily meathauls may be doing to the general health and sustainability of a given species, sadly missing out on the real joy of the overall fishing experience.

I have to admit that I have been just as guilty of this as any fishing guide, determined to consistently lay more fish on the dock than the next guy. The gawking bystanders as you unload a box full of fish and half a dozen people snapping pictures of your daily spoils would make just about anyone feel as if they had truly earned their paycheck.

Many of us have heard or been involved in boating blackfin until we ran out of box room, counting beeliners at the dock and breaking one hundred, or landing several kingfish for a tournament knowing we have no intention of eating them. If we can be honest, how many of us have allowed a portion of this success go to waste in our freezers? Or in the case of tuna, watch a portion of it nearly spoil during our attempt to give it away fresh rather than frozen.

It seems as I grow older, I just don't find myself as mad at the fish as I used to be. I can't help but think that while we as sportsmen can volunteer our time and efforts for many worthwhile causes, we still have some work to do in cleaning up our own daily practices. Two of the most frequently asked questions aboard my boat are; What is the limit? And can we keep it? While I have no problem with either question and happily answer them daily, I can't help but wonder how all of these fish could possibly be eaten by so few people.

Now you may ask yourself; just what is he driving at? Well, I'm really not driving at anything specific. This is only food for thought, and just a few of the questions that I truly don't have all the answers to. I have long been an advocate of allowing an angler to fish for, catch, and possess a limit of fish within the scope of applicable regulations and I always will be. I feel that a red-blooded American angler should be able to possess whatever he wants within the law without question. But as in all walks of life and every indulgence, a little self-restraint or self-imposed moderation can and does pay huge dividends.

This is the very reason that many of my customers have heard me say, "We probably have enough of these, let's go fish for something else."

I really do enjoy stepping out of the boat in the afternoon talking about the limits of fish we caught, but to me there is just as much pleasure in saying, "No we didn't catch a limit, but we left them biting!"