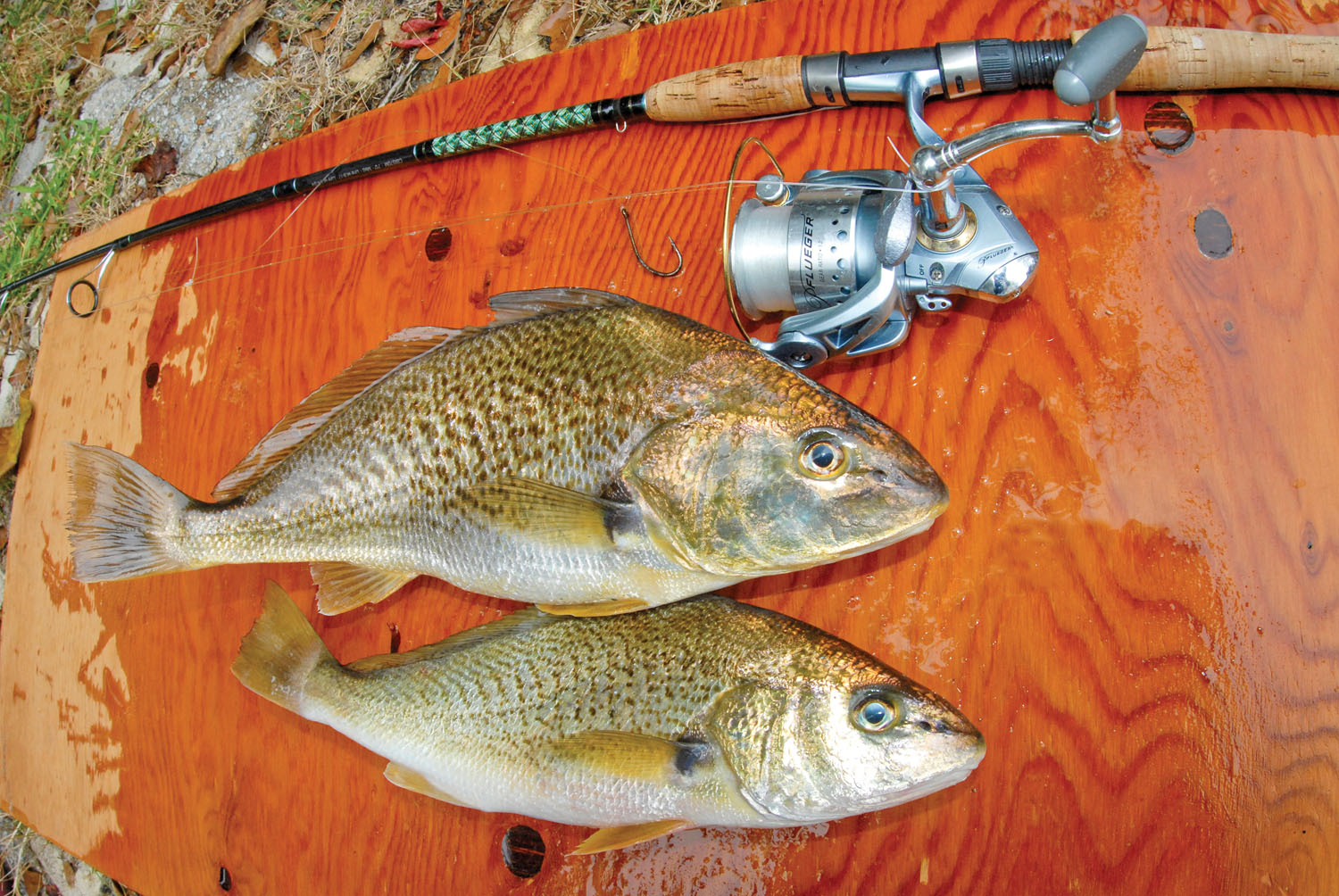 Mongo croakers like these are commonly caught in winter at platforms just offshore.

February is a tough month along the coast, but if there is one sure deal out there, it's tying up to a platform in state waters. You have to get there, of course, and the weather is all-important. But catching a calm day in a safe boat, with a couple pounds of frozen squid on handthat's a sure recipe for a cooler full of fish. They're hungry this time of year, and fishing pressure is minimal by summer's standards.

We have two means of fishing these platforms in winter. First, with a medium-action boat rod, rig up three red circle hooks on 60-pound mono leader, along with an 8-ounce drop weight. Attach squid and send to the bottom close to a piling, and leave the rod in a holder with reel in gear. When the rod jiggles and bounces, ignore it. When it bends over and stays bent, it's time to reel. Every kind of fish down there will feed on squid: Keeper snapper, slot redfish, big whiting, croaker and Gulf trout. With the latter three fish, they're maybe the biggest you've ever seen; one winter I cranked up a Gulf trout that weighed 4.3 pounds, weighed back at the marina.

Smaller Gulf trout can be filleted into fresh bait, so bring a cutting board and sharp knife. We often send a trout head or entire fillet back down, where a bull redfish may grab on. This is fairly steady action, but we supplement it by jigging with baitcasting tackle. Not the fast jigging of summer, but fishing the jig slowly in the depths near bottom, where we catch the same fish. Along with hungry, spawning sheepshead, if we add a pinch of shrimp to the jig. The jig's tail isn't really necessary, that lead head and hook will sink quickly down to ideal depths of 50 feet or so. The jig may be intercepted along the way by sheepshead, however.

This is fast action for winter fishing, faster than most days back at the jetties. Certainly worth the effort. However, a safe boat and a good weather forecast are necessary. Keep a GPS handy for navigating back to the jetty or beach, if a fog bank should move in and cut visibility. An old fashioned compass is handy, too. In our younger days before GPS, winter fog banks lurking further offshore would move in towards the beach around 4 p.m. and would almost beat us back to the jetties. But we always won the race, though sometimes by a narrow margin. Twice, we ran through the jetty safety cut, with the fog beginning to obscure the end of the rocks. That's cutting it close. Lots of bad things can happen if visibility is cut to a few yards.

With low water temperatures, this is a hazardous time to end up in the water, so stay alert and sprint for the beach if an untimely norther rolls in. And keep a bucket on the boat; they're handy for a number of uses including holding fish destined for the cooler, but also for bailing a boat if a bilge pump fails. One weekend we were caught about nine miles off Sabine Pass, in a safe 22-foot Aquasport with cabin, but had a devil of a time making it back to the jetties when a sudden, vicious northwest wind arrived under a blue sky. We dallied a little too long; somewhere I still have pictures of the guys posing with big Gulf trout with whitecaps splashing pilings behind them. We untied from the rig and had to skate about 45 degrees off-course until reaching calmer waters near the beach, then ran to the jetties. Next day in the papers, we read how some young guys had tried it in a smaller boat off Freeport, and didn't make it back. This was before weather apps, cell phones and other modern conveniences. It's so important to remember that the worst thing you can do is wind up in cold water offshore. That's why I wouldn't recommend trying these Gulf platforms in a low-sided bay boat. Not in winter. A box full of fish isn't worth it.

If you don't want to try this sort of action, there is always the bigger, safer partyboats to consider; I've made many winter trips on these vessels. There are zero worries about safety; you can nap in dry semi-comfort (compared to a small boat, anyway) and those fish further offshore, reached by these bigger boats, are indifferent to winter's cold.