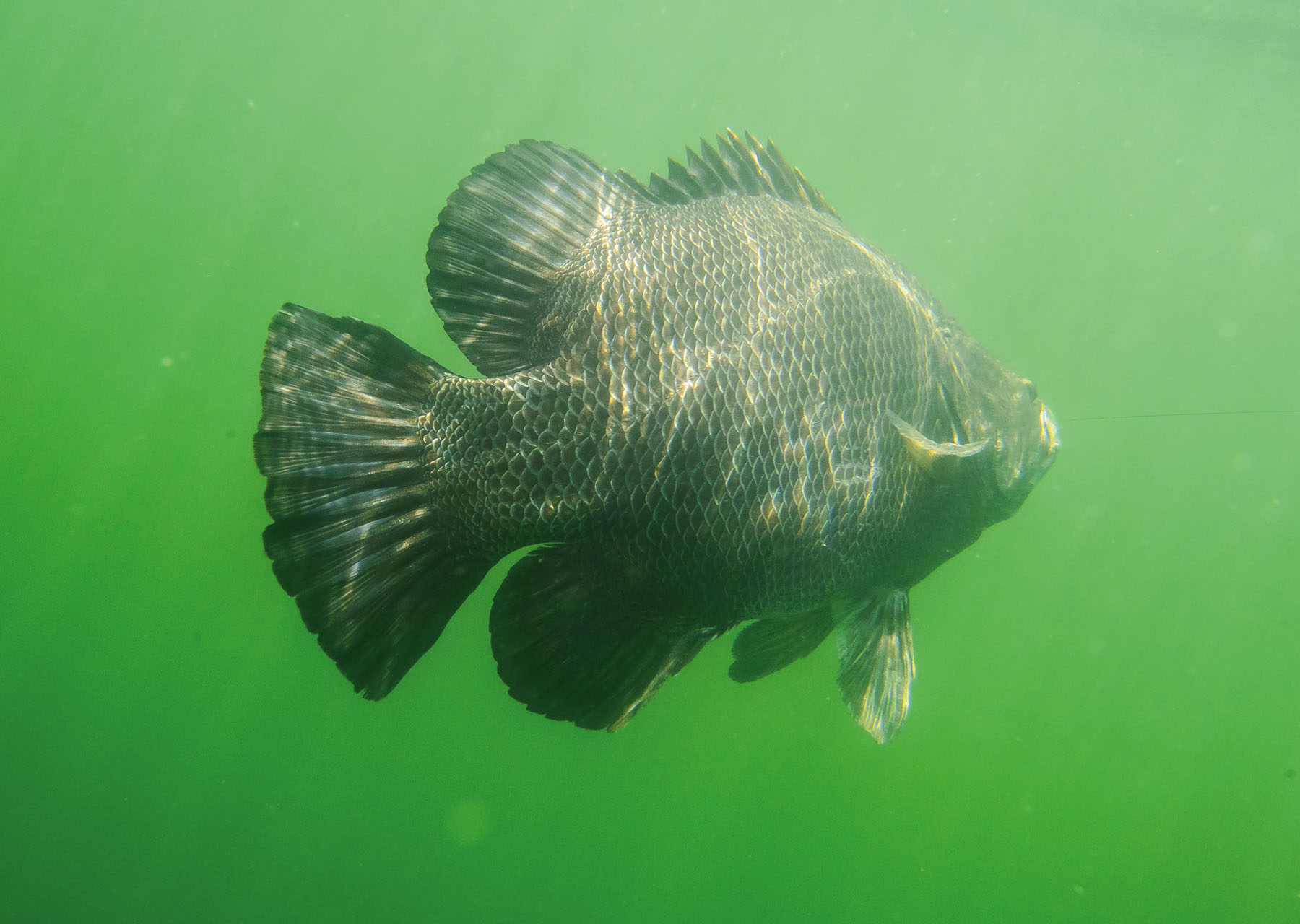 The Atlantic tripletail is an unusual fish in many respects. There has been very little scientific evaluation of their migrations, behavior or spawning habits. Only recently have recreational harvest regulations been enacted in US coastal states. This is notable in modern times for a prized game fish species, especially one so famous for providing excellent table fare.

Given that tripletail exist in most tropical and sub-tropical seas around the globe and in US coastal waters from California to Massachusetts, most common in Georgia and the Gulf states, you would think the scientific community would have a better handle on them. Classified scientifically in 1790, how this outstanding game fish has eluded study to the degree it has is almost as mysterious as the tripletail's behavior.

It might be accurate to say fishermen know nearly as much about tripletail as biologists. That's how little has been scientifically documented about Lobotes surinamensis. And, if you get too quizzy with knowledgeable anglers, the most they'll likely offer is that tripletail is the finest tasting fish you'll ever catch in a Texas bay.

TPWD has documented tripletail captures in survey nets and also recreational landings in all the major bay systems. And here's another anomaly–why does Matagorda Bay annually attract more tripletail than all other Texas bays combined?

Back in 2008, I assisted University of Texas Marine Science Institute research staff in rod-reel capture of tripletail from Matagorda Bay. It was hoped that mature fish captured during spawning season might do their thing in the lab. At that time tripletail had never been spawned naturally in captivity. This project also failed. Sadly, rather than males and females getting cozy; the darn things tried to kill each other and had to be separated. The few survivors were eventually released. Put another check in the strange and unusual box.

More strange facts about the tripletail are their uncommon affinity for structure and the odd habit of floating near the surface on their side. Quite often they are spotted alongside pier or channel marker pilings and gas-oil well platforms. Any piece of flotsam is likely to have a 'tail alongside if any are present, and they are often found in sargassum rafts offshore. The floating on their side thing is thought to be a sort of opossum trick related to feeding. They come instantly to life anytime a small finfish or crustacean makes a mistake. And they love shrimp!

Have you ever seen a tripletail?

Bill Balboa, TPWD's Ecosystem Leader for Galveston Bays, likes to relate his first sighting - "I have been fascinated with tripletail since my first encounter with this bizarre fish back in 1988. I was a neophyte Texas Parks and Wildlife Fish and Wildlife Technician working at the Palacios field station and we were motoring down the ICWW when I spotted what appeared to be a piece of black plastic floating on the water's surface. Motivated to do the environmentally correct thing we turned the boat around. As we idled towards the offending litter, the plastic suddenly came to life, and disappeared below the surface. A subsequent discussion, with the station's biologist, about this puzzling instance, revealed that what I had seen was, most likely, not litter at all but a large tripletail floating on the surface."

Personally - My first encounter was also mysterious to me. Running across Espiritu Santo Bay we decided to try for trout at a well near the Army Channel. Drifting toward the well I spotted what looked like a large freshwater crappie beside a crab float. I knew it was definitely not a crappie but I tried to catch whatever it was. After several casts it "woke up" and disappeared, probably annoyed that I had interrupted its sunbathing. That evening I mentioned it to Capt. Bill Pustejovsky and he had a good laugh. Billy had many years of tripletailing under his belt and I didn't even know what it was. He eventually shared his "secrets" and I've been lucky to catch quite a few since.

So to hook you up with some tripletail knowledge that might enable you to enjoy these mystery fish on a personal level, I have invited Capt. Tommy Countz of Matagorda and Will Drost of Lake Charles LA to tell you how they do it.

Capt. Tommy Countz – I've been fishing West Matagorda tripletail more than 30 years and I learn more each year. We start fishing for them in April and continue until late October. We target well and channel marker structure, putting the bait very close, usually live shrimp, 6-7 feet under a big popping cork. I use 7-foot medium-heavy rods, Shimano 200 or 300 baitcast reels, with 50-lb FINS braid. I like 100-lb fluorocarbon or coated wire leaders. A big sharp single hook finishes my rig. Once you hook up it is imperative to get the fish away from the structure by backing the boat, otherwise it will run back and wrap the structure, cutting your line on barnacles.

I feel extremely fortunate to have these wonderful fish in our bay system and to be able to provide this type fishing for my friends and clients. I've developed a deep respect for them and cannot emphasize conservation enough. Texas allows three tripletail per day but I believe a boat limit of 4-5 fish would take some of the pressure off of the fishery. My 12-year-old granddaughter caught her first 'tail this summer and I'd like to see her be able to share this experience with her kids.

I recently guided a group in the 2013 Texas Oilman's Invitational Charity Fishing Tournament. This team of four fishermen and I probably possess over 150 years of tripletail knowledge. We were fortunate to win first, second, and third places in the tripletail division with three fish that totaled over 80 pounds: 32lb-7oz (14 ounces shy of the state record), 27lb-13oz, and 23lb-0oz.

When your cork goes down, get ready for a war!

Will Drost – From Sabine Pass to the Lake Ponchartrain basin, anglers have become enamored with this hard-fighting, unique gamefish. My home waters include the areas of Sabine Pass and extend east and south. I have caught them inshore and as far as 140 miles off our coast. We see good numbers beginning in March and April, but my experience has been that those early fish tend to be juveniles; by mid-summer the bigger fish show. We fish structure in 15 40 feet of water and always stop on a sargassum line or debris. I have caught tripletail under buckets, pool floats, shoes, and coconuts. I have seen them floating solo and in pairs under nothing. Berkley Gulps are effective but generally I do not leave the dock without live shrimp and finger mullet - the new Vudu Shrimp gets their attention as well. For tackle, I employ a heavy action rod and 50-65 pound Power Pro tied directly to an Eagle Claw 3/0 Kahle hook. In clear water I use a 50 pound fluorocarbon leader.

As long as offshore angling days and bag limits continue to be reduced, anglers will continue to shift focus. In my opinion, no species has felt the cross-hairs like tripletail. Bigger bay boats, dependable engines, improved tackle, and their delicious table quality has that kind of effect on such a fish; especially one that can be caught by sight-casting.

I serve on the Louisiana's Department of Wildlife and Fisheries' Commission and recently, based on good science from our department, encouragement from CCA and vocal anglers, we set a size and creel limit. When the measure goes into effect, anglers here will be allowed 5 fish with an 18" minimum. I applaud our state for now joining the entire Gulf coast in protecting this species for future generations.