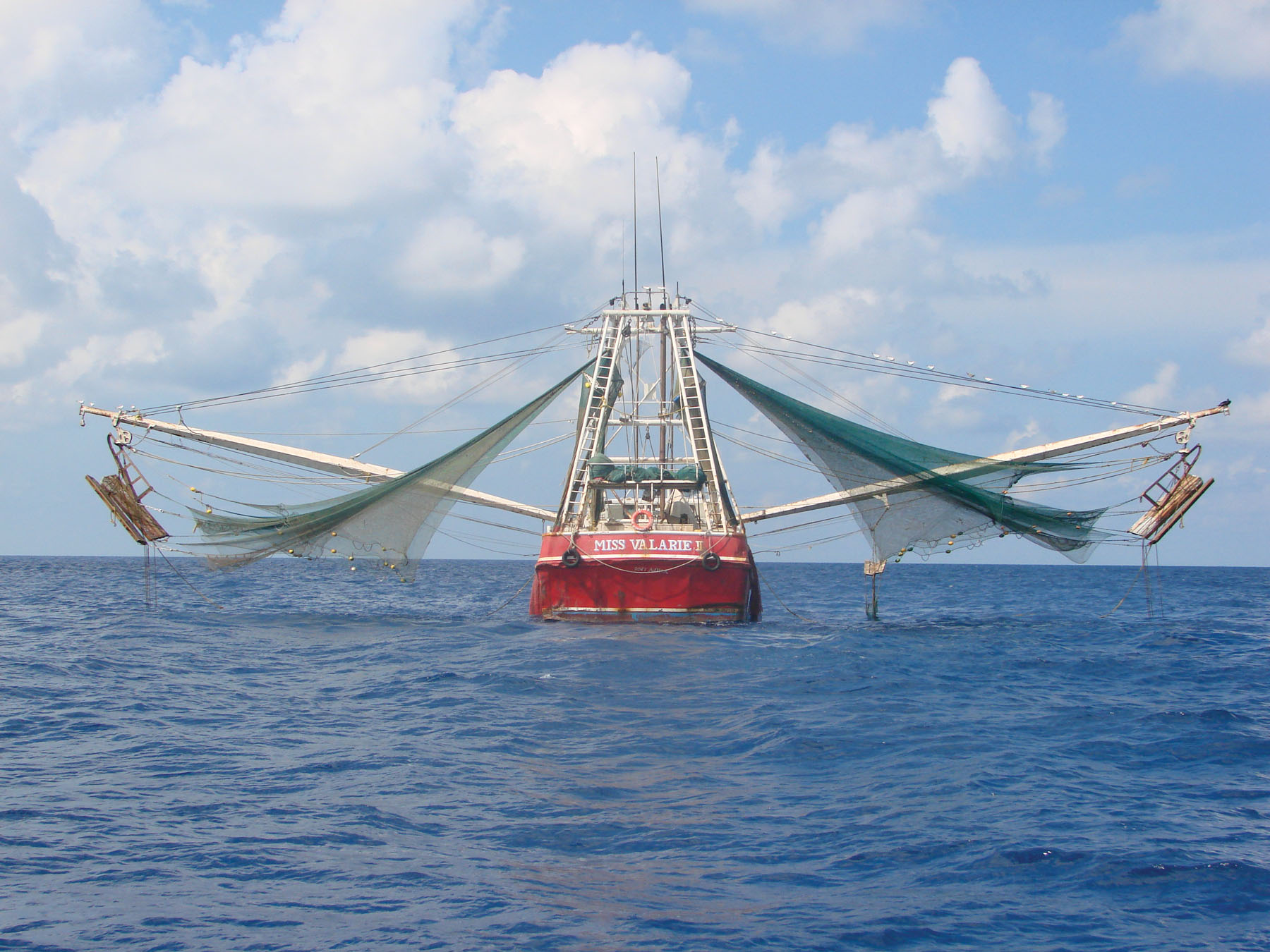 Cobia have a great affinity for floating structure and anchor shrimp boats are some of the best.

Every year we await the migration of the cobia. This curious fish is also affectionately known as the ling , lemonfish , crabeater or sergeant fish. By whatever name you may call it the cobia is not only a popular gamefish, it is also highly-prized as table fare.

Most Texas anglers find it difficult to pattern cobia on a daily basis and therefore view this species as an opportunistic fishery to be enjoyed when and where they are found - which more or less adds to the mystery and allure of angling for them.

Cobia are pelagic spawners, that is, they release many tiny buoyant eggs into the water which become part of the plankton. The eggs float with the currents until hatching. The larvae are also planktonic, being more or less helpless during their first week until the eyes and mouths develop. Males mature at two years and females at three years. Both sexes lead moderately long lives of 15 years or more. Best I can find is that spawning takes from April to September in large offshore congregations where females are capable of spawning twenty or more times during the season at intervals of one to two weeks.

They grow fairly quickly and can reach upwards of 20 inches in their first year and some even breaking 40 inches by age two. Statistics show that although cobia may live as long as eleven to twelve years, most fish caught by anglers are between two and five years of age.

Extensive research on cobia in the Gulf of Mexico has shown that they are marathon swimmers showing a migration of over 1300 nautical miles by one fish that was tagged off of the Louisiana coast and recaptured off the Northern Coast of South Carolina. Another set a cross country record being recaptured over 700 miles from where he was tagged near Port Canaveral Florida, only 46 days later.

Cobia are found worldwide in subtropical and warm-temperate waters. In our part of the Western Atlantic Ocean they are found as far north as Nova Scotia, south to Argentina and throughout the Gulf of Mexico and Caribbean Sea. Cobia winter in the Gulf but almost exclusively in the Eastern and Southern portions avoiding the colder waters off of Texas.

Cobia are not bashful and are at times fairly aggressive feeders while at other times may seem to just have a severe case of lockjaw. You just never know how one is going to react to a sight-casted bait. Sampling stomach contents reveals that cobia are fond of crabs, hence the nickname crabeater. Finfish and eels are also staples in the cobia diet.

Researchers are beginning to unravel the migratory behavior of the cobia and how they make their way from the eastern to the western Gulf of Mexico. It has long been known that certain portions of the northern coastline see little in the way of a cobia migration, yet we know that they get here somehow. It has recently been discovered that they ride the Loop Currents and don't always follow the coastline as previously thought. This Loop Current idea may well explain not only the lack of fish in some areas, but also the reason that we can have really good years and then some not so good. It basically all depends on where the currents deposit the fish on any given year. This can even explain their rapid return to the eastern Gulf in the fall - riding those same currents.

May is the month cobia begin to show up in Texas waters and I would like to discuss briefly some of my tactics for finding and catching them.

Cobia seem to prefer floating structure such as weedlines and marker buoys and are also attracted to oil and gas platforms. Believe it or not we have even caught cobia from under and around whale sharks that are feeding near the surface. Actually, nearly every whale shark that I have ever seen has had at least a few Cobia in tow. Another hot spot is behind anchored shrimp boats. These boats probably account for more cobia landings than any other structure out there. Simply pitching chum as you drift alongside is usually all it takes to get him out in the open. Keep the chum going as you drift away and if he is there he will follow.

One of my favorite and most successful approaches to locating cobia on structure is to use a bucktail or curly-tail jig anywhere from 2 to 6 ounces. Pull in next to a likely piece of structure, drop the jig straight down about three-quarters of the way to the bottom, and then jig back up rapidly. If a cobia is present he will often chase the jig to the surface on the first drop. He may not take it on the rise, but he will reveal himself and often give you time to work him into a bite.

Getting a finicky cobia to take a bait can be one of the most frustrating experiences as there is no surefire way. At times I just throw everything in the boat at them. And I mean everything; I have caught them on things as strange as Vienna sausage to a piece of chicken wing. Once I find something that piques his interest I will cast over him and play a game of keep away for three or four throws, taking the bait away as he approaches. The goal here is to get him worked up to the point he will pounce and swallow your offering without a second thought.

May brings a new fish to our waters every year and although he is known by many names, regardless of what you call him, the cobia is as exciting as he is frustrating and tops my list as one of my all-time favorite fish to attempt to outwit. If you cannot get him to take a bait readily, do not give up. Take this from a guy who resorted to baiting up with leftover breakfast donuts - ling can definitely be picky eaters.