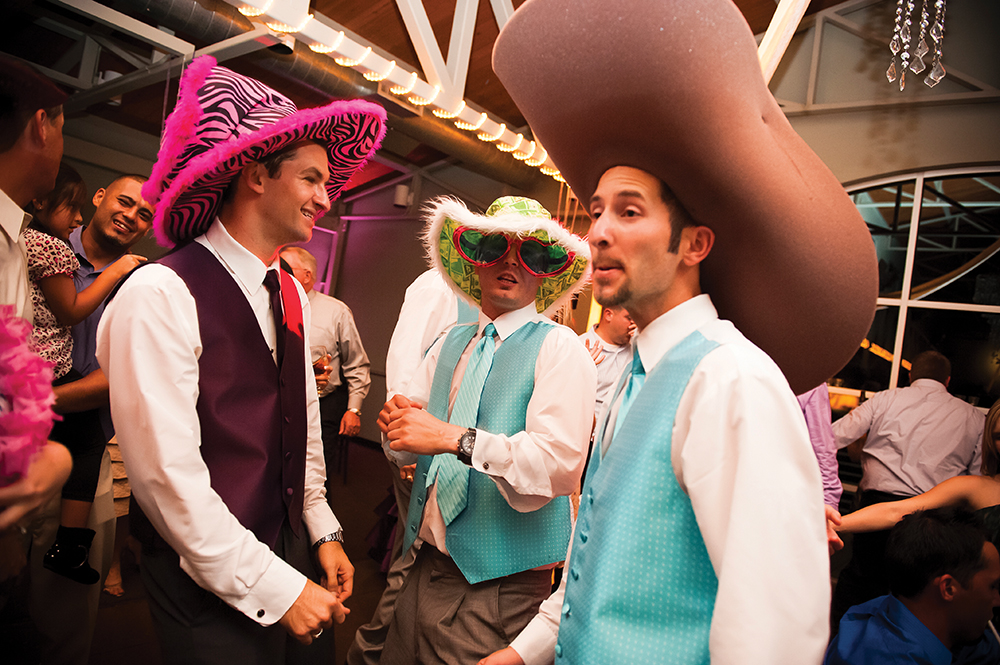 Friends since childhood, we’ve had a lot of fun together. This was at my wedding.

It was late October when I received a call from Parker Moon, one of my old childhood friends, proposing that we make a fishing trip together. His family had recently purchased a bay house near Riviera Beach on Baffin Bay and he wanted to get a few buddies together for a weekend getaway. He already had the guide lined up, all we needed was our fishing gear. We called another of our other childhood buddies, Kyle Zaragoza, and he quickly said, “Let’s do it!”

On the eve of the trip, I was scrambling on what to pack and what still needed to be done before I could leave. Excitement continued to build as I pieced my bag together. I had never been to Baffin and couldn’t wait to try my luck at the trophy trout with my longtime friends. It was hard to sleep with scenarios of catching “the big one” running through my mind. Finally, no sooner had I fallen asleep, the alarm was going off .

I rolled out of bed and slowly put myself together. I kissed the wife and kids goodbye and made my way to work. I knew it was going to be a long day, but it would all be worth it in the end. I could just feel it.

As the day rolled on I was getting more and more anxious. I had already received multiple phone calls asking what time I was leaving work and where we should meet. Quitting time, and time to hit the road. My parking spot was a cloud of smoke as I burned out of there like my wife heading for a kid-free trip to Target.

I flew home awaiting the arrival of my buddies so we could head south. I called them repeatedly with the same question, “Where are you now?” Each time they replied, “Five minutes closer than the last time you called.”

When they pulled in the driveway I was standing there like a hitchhiker waiting to be collected. I threw my gear in the bed of the pickup, kissed my wife and kids one last time, and we hit the road.

The long drive consisted of a lot of catching up, reminiscing and bantering the way old friends do. An outsider looking in might have had difficulty at times deciding whether we’d ever been friends at all.

We made it to the bay house a little past midnight, exhausted from the long day and even longer drive. We unpacked, got our gear together for the morning, and hit the sack. Tired but anxious for the next day of fishing.

We awoke with everyone’s alarm blaring from one room to the next. We threw our clothes on, jumped into our waders, and headed to the pier. Our guide arrived right on time and within a few minutes we were underway.

The boat ride was brisk to say the least on that cold and windy morning. Pulling up to our first stop, the four of us wasted no time vaulting over the gunnels, rod and reel and tackle bag in hand.

We casted profusely, believing any cast could be the lucky one to bring in the trophy we had traveled so far to catch. We caught a few trout and small reds at that stop, nothing to really crow about.  We unfortunately received more entertainment from Kyle than the fish. The hole in his waders had him soaked and shaking like a wet dog.

Getting Kyle in some warmer clothes, we were off to our next spot. Parker and I waded down the bank as Kyle and our guide stayed in the boat and drifted on the other side.  After about 15 minutes, Parker nailed a nice red and the fight was on. Within seconds I too was hooked up. After hauling in six fat and healthy reds, we decided to move on to our next spot.

We went into the shallow waters of a nearby back lake where the game would be sightcasting for black drum. I had never done this before, but it was an interesting experience watching the drum devour your bait from only a few yards away. We enjoyed the drum for a while and then moved on to our final spot of the day.

We were back on the trout in the waist deep waters of Baffin. We mulled around for a while, managing quite a few smaller trout and a couple more reds. We decided to call it a day and head on home.  We had caught a lot of nice fish, but the trophy trout we were chasing was still at large. That night we grilled steaks and sat around the table planning the next day. Drained from lack of sleep, we wasted no time turning in early.

The next morning, we were well rested and ready to try our luck again. We met the guide at the pier again and made our first stop close to the banks of a cut in waist-deep water. We again jumped out of the boat as soon as it stopped, anxiously casting in every direction. We landed a lot of mid-size trout, nice keepers, but well-short of our dream fish. We fished on.

Second stop; not much luck outside of a few small trout, and I began slowly making my way deeper into the bay, almost to the top of my waders. Discouragement was trying to overtake me and my focus was trying to wane. One more cast, I kept telling myself. One more cast.

Suddenly, in the middle of my daydreaming, the rod was nearly jerked from my hands. Awaking to the surprise of a jolting bite I instinctively reared back and the fight was on. I was not sure if I had tied into a bull red or a trophy trout but, whatever it was, it was strong.

The battle seesawed several minutes, the fish would take some line and I’d get some back. Finally, the fish made a desperate run that ended in a tall jump and my heart jumped with her.

I don’t normally carry a net and, of all things, I had a trophy trout almost within reach, with plenty of fight left in her. All I could think was if I lose this fish I will be devastated.

Hearing my calls for a net, our guide, Parker, and Kyle all began scurrying in my direction to see what the commotion was about. They wanted to help, but it was all in my hands, and I didn’t want to disappoint.

After at least another ten minutes of back and forth, swimming her in circles on a tight line, the guide slung me his net. The closer the fish got, the bigger she looked and the more nervous I felt. I swam her in so many circles that I feared I might get dizzy.

At long last she was on her side within arm’s reach and I swam her into the waiting net. Scooping her up in one swift motion I was horrified that half her body was hanging over the rim. Note to self: Carry a net in trophy trout water – a big net!

I felt instantly relieved. The fear and anxiety that she’d get away left my brain in a fraction of a second. We weighed and measured the fish as quickly as we could, keeping her in the water except for brief seconds at a time. We whooped and hollered and high-fived at least a dozen times, celebrating my new personal best speckled trout…all 28-inches and 8-pounds of her.

Photos were snapped hurriedly as we set about making certain she was fully revived and ready to be released. In my mind I will always see that thrust of her tail as she headed off, back into Baffin Bay. Such a beautiful creature.

The rest of the day was spent trying to get Parker and Kyle on a trophy, but every stop was a dead end.  Kyle was lucky enough to have another hole in his second pair of waders, and it wasn’t long before he was about frozen. We decided to call it a day and headed back to the house. We spent the night fishing off the pier and landing a few more nice trout under the lights and a bull red. We did some more reminiscing and a lot more heckling to close out the weekend. It was a long drive home, and we were all excited to tell our wives and kids the stories of our great weekend adventure.

It is important to cherish the moments we have in the outdoors with our friends. Life goes by in the blink of an eye and we all get caught up in the rat race. The friends we grew up with or made through the years are very important to our development as a person. They help you through the hard times and they are a direct ingredient of the good times.

Much like family, true friendship is a bond that even though distance and responsibilities can come between, it can never be broken. I am very blessed in the friendships I have made over the years, and they have helped mold me into the husband, father, and son I am today.

Never forget these moments and make time for as many journeys like this one as you possibly can. Always accept an opportunity to enjoy time fishing with friends. You just might catch your personal best, or at the very least, return home with more memories to relive the next time you can get together.

One day we will all come to a point where it will no longer be possible to do the things we do today. We will regret every bit of not getting out and taking advantage of God’s Great Green Earth.