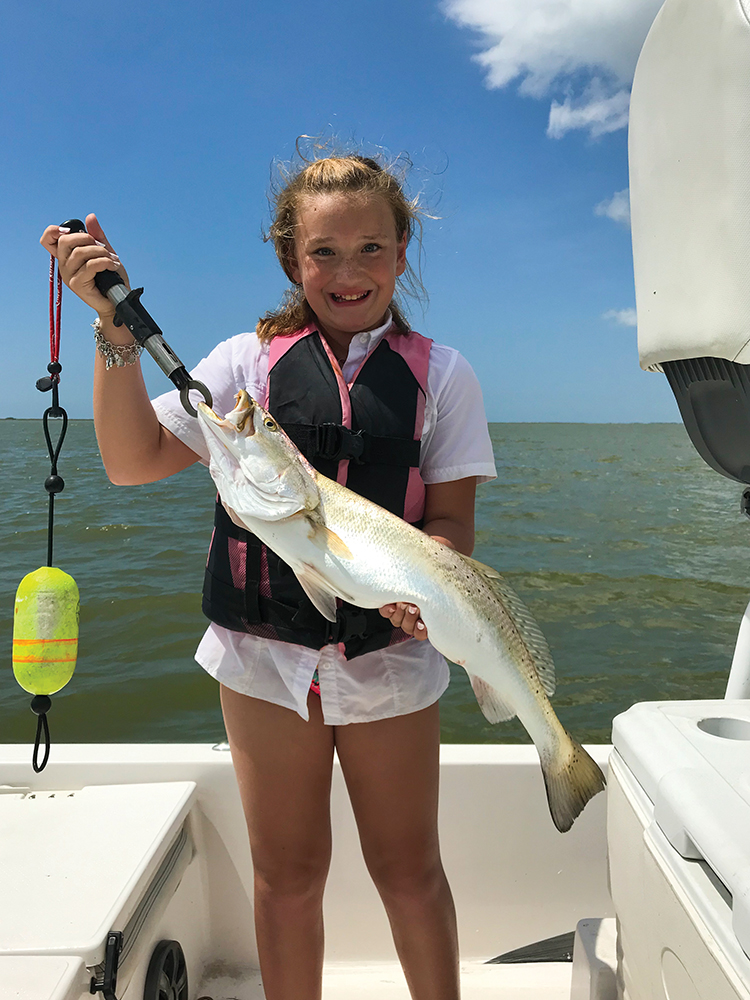 I would like to share a proud Daddy moment. Attached are photos of my daughter Kylie Traub with her 27.5” trout caught in Matagorda Bay. Kylie is mostly a momma’s girl, but loves when I have a chance to get her out on the water. The transformation from girly stuff to fishing with Daddy is mild but it happens. She still has to have matching outfits and bedazzle items all the way down to her James Avery charm bracelet. I guess you could say she gets it done in style.

Kylie dreams of becoming a marine biologist or a game warden. She’s a great student and wants to learn more about the actual fish than how to catch them. How long do they get? How many babies do they have? Why do they have speckles? What do they eat? Where do they live? All are great questions that after researching the answers for her have actually helped me understand the movements and tendencies of trout, making me a better fisherman. I must say, I have been fishing most of my life and actually started guiding a few years ago and have had several customers and friends land trophy trout. I was a proud guide when they did, but nothing compares to the proud Daddy moment I experienced when Kylie hooked into this beauty.

Our crew on the day Kylie caught her big trout included my buddy Ryan, his 10-year-old daughter Savana, who is Kylie’s best friend, and 12-year-old son Aiden. I had been running to the surf with flat calm conditions several days and we hoped to take the kids out there for the excellent bite we had been enjoying – but the surf was rough that morning and to East Bay we went. We drifted several areas and picked up some keepers but never really found what we’d hoped for the kids. Keeping youngsters excited can be a challenge when the fishing is a grind, but Kylie never gave up.

I expected the bite would improve toward midday. Kylie was beginning to fade on me and I did my best to encourage her to hang in there. She said OK and continued casting that pink cork and 3” white Gulp shrimp. A few minutes past noon she asked me to hold her rod while she grabbed a drink. I told her to make just a few more casts as were coming to the end of our drift.

She was standing on the back of the boat fishing her heart out while I was tying a new jig head on my line. I had been randomly checking her cork; when the fishing is slow her eyes tend to wander. When I noticed her cork going under I honestly thought it was probably another hardhead. I told her she had a bite and she quickly made a hookset that would have made Bill Dance proud.

I heard her drag screaming as she shouted, “Holy Moly Dad!” I thought she had a redfish until that big trout came thrashing to the surface. She fought like a pro, following the lessons I’d given her over the years, and guided it toward the net I was holding.

This is where the story gets interesting for you but a bit embarrassing for me. Jubilation turned to despair as Dad missed it with the net – not once but twice. Everybody was screaming encouragement; the drag was still squealing, the cork was banging the side of the boat, the leader was rubbing against the hull, and the fish was making another hard run trying to shake itself loose. All I could think was that I’d blown it on my daughter’s trophy trout. Kylie somehow kept her cool way better than Dad and finally we had the big fish safely in the landing net.

I knew we had to act fast to get our pictures and try to get Kylie’s trophy released while it still had enough strength to survive. Ryan grabbed the measuring stick and we were elated when he declared it to be 27-1/2 inches. Kylie already had her on the Boga Grip and asked, “Dad, we should release her, huh?” I said absolutely sweetheart. This little girl who is already extremely interested in marine biology was just as excited about releasing this fish as she was about catching it.

Fishing is one of my greatest passions and I want to say nothing could be more satisfying than what I experienced that day. The time spent with my daughter and the excitement of that day will never be forgotten. She’s definitely hooked on fishing now and Mom is trying to find a speckled trout charm for that James Avery bracelet.