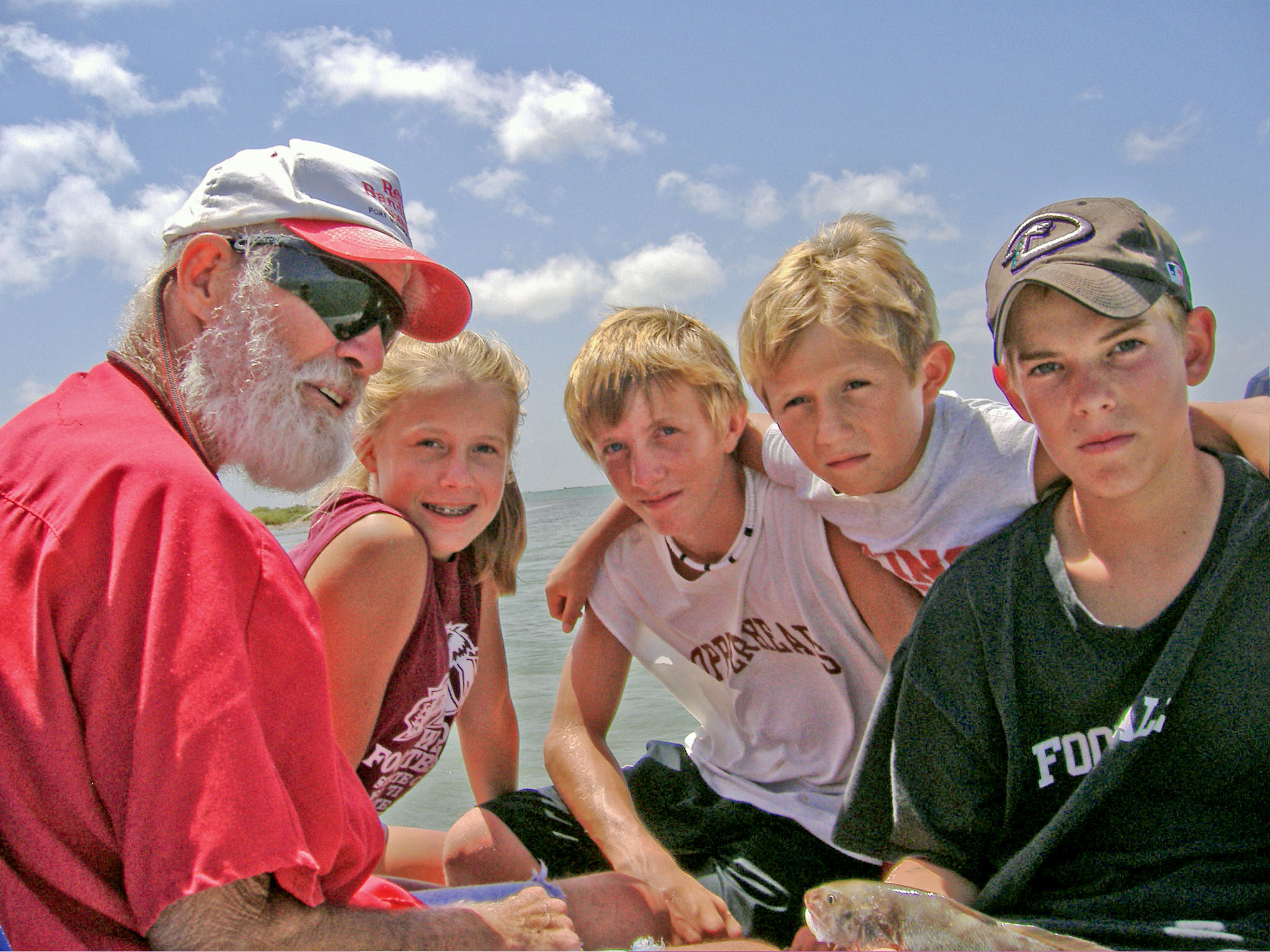 The Texas saltwater fishing community lost an icon on April 23, 2012 when Capt. Bob Fuston went to eternal rest following extended illness at the age of 78 years.

Capt. Bob was born August 11, 1933 to Earl and Pricie Dugger Fuston in the north-central Texas community of Brownwood. Bob died in his old hometown of Glen Rose where he resided before and following his illustrious and colorful twenty-three year career as a fishing guide at Port Mansfield.

Bob served in the US Navy and then worked as an electrician, raising a family at Glen Rose. He worked a number of years for Brown and Root's Nuclear Division on the construction of two power plants in North Carolina. Bob then worked as a superintendant over electrical instrumentation during construction of the Comanche Peak power plant near Glen Rose. Bob married Fran Riddle in April 1980, the same year he followed doctor's advice and retired from the high-stress world of construction management. Seeking an easier lifestyle, he and Fran packed up and moved to Port Mansfield.

His association with Port Mansfield began in the 1970s as a guest on corporate fishing trips. Lured by great offshore fishing Bob began making trips of his own and soon bought a boat that he kept in Port. His entry into the charter business was in offshore fishing but he soon learned the weather and seas simply wouldn't allow a small boat operator enough days to make a living. That's when he sold the big boat and began working the bays.

Bob said the red bandana trademark was never planned. "Back when Fran and I first moved to Port we had a little rent house that was always hot as heck in the room I used as a shop. I was a hobby rod builder and trying to wrap a few to sell as I got started in the charter business. The sweat would just pour off me so I'd tie a red handkerchief around my forehead; that was the only color I owned. I would take a break and go to the post office and such…we pretty much stayed to ourselves, nobody knew my name, they just called me 'that red bandana guy.'"

Red was definitely Bob's color. After becoming established in the guiding business he ran a red Shallow Sport and often dressed in red tee shirt and shorts. Of course he wore the bandana all the time.

During an interview Bob granted me in 2002 when I was running a series of articles on coastal legends he related tales of his start in the guiding business, attributing much of his early success to Bob Brister at the Houston Chronicle and Ken Grissom at the Houston Post.

"Sportswriters had a huge following back then. Brister was a friend and great sportsman who loved fishing the Laguna Madre. I started guiding in 1981 and he came down in 1982 and I took him fishing. We had a great day and he wrote a very nice story in the Chronicle. That right there really got my phone to ringing," he said pointing at a yellowed news clipping.

Bob then went into the story of the Mansfield Mauler. "I had an elderly client that fished with me often and he had trouble keeping his lures out of the grass, so I began tinkering with floats on his line. Each improvement led to the next and soon we had a stiff piece of monofilament rigged with a crappie float and beads for more noise that was working pretty good but prone to tangling. Jim Cooper, owner of the Tackle Box in San Antonio, suggested I try a piece of wire instead and that was my light bulb moment."

The infamous freeze of 1983 made for very tough fishing. Rigging clients with his so-far un-named contraption as he called it, Bob's charters during the 1984 season were gaining notoriety for the numbers of fish landed.

"That's when Ken Grissom came down to fish with me," he said. "Ken was friends with NFL player Gerald Wilson and they put a trip together with his wife Marty, who had never caught a fish. Ken wanted to do a story for the newspaper."

"It turned out that Marty got a big redfish on her third or fourth cast using my float rig. I was using one, as was Gerald, and we really got into the fish. Grissom was not. Pretty soon he says 'that contraption is just mauling them.' I rigged one on his line and by the end of the day he was calling it the marvelous Mansfield mauler." Bob went on to explain that like Brister's piece in the Chronicle; Ken's story in the Post lent not only a name for his invention but an even busier guiding schedule. "I was booked solid," he added, "and everybody wanted a Mauler."

Through relations with tackle salesmen and reps, Bob's Mansfield Mauler business grew with incredible speed. Fran was running a tackle factory of sometimes a dozen employees in their home and Bob was fishing every day. Bright yellow packages emblazoned with a caricature of the Red Bandana himself were soon available in tackle shops across Texas.

Bob will long be remembered as a fun guide to fish with, the man who gave us the Mansfield Mauler, and most importantly, a man of standup character - a true gentlemen.

Capt. Terry Neal, a legend in his own right around Port Mansfield, describing Bob's contribution to Texas fishing says, "Everybody remembers him as the inventor of the Mansfield Mauler and that's true. But Bob made other contributions as well. Capt. Bob was the grandfather of wade fishing in the Lower Laguna Madre, back when everybody else stayed in the boat."

Capt. Bruce Shuler of Getaway Adventures Lodge for whom Capt. Bob ran charters in the latter part of his guiding career says, "Capt. Bob was a legend, mentor and always a special friend. Never an alarm clock guide, always thinking of the client's satisfaction, never coming in until the clients had enough. Bob had a deep respect for the resource and always displayed solid conservation ethic."

Adios Red Bandana! Thanks for the memories and all that you gave the fishermen of the Texas coast.