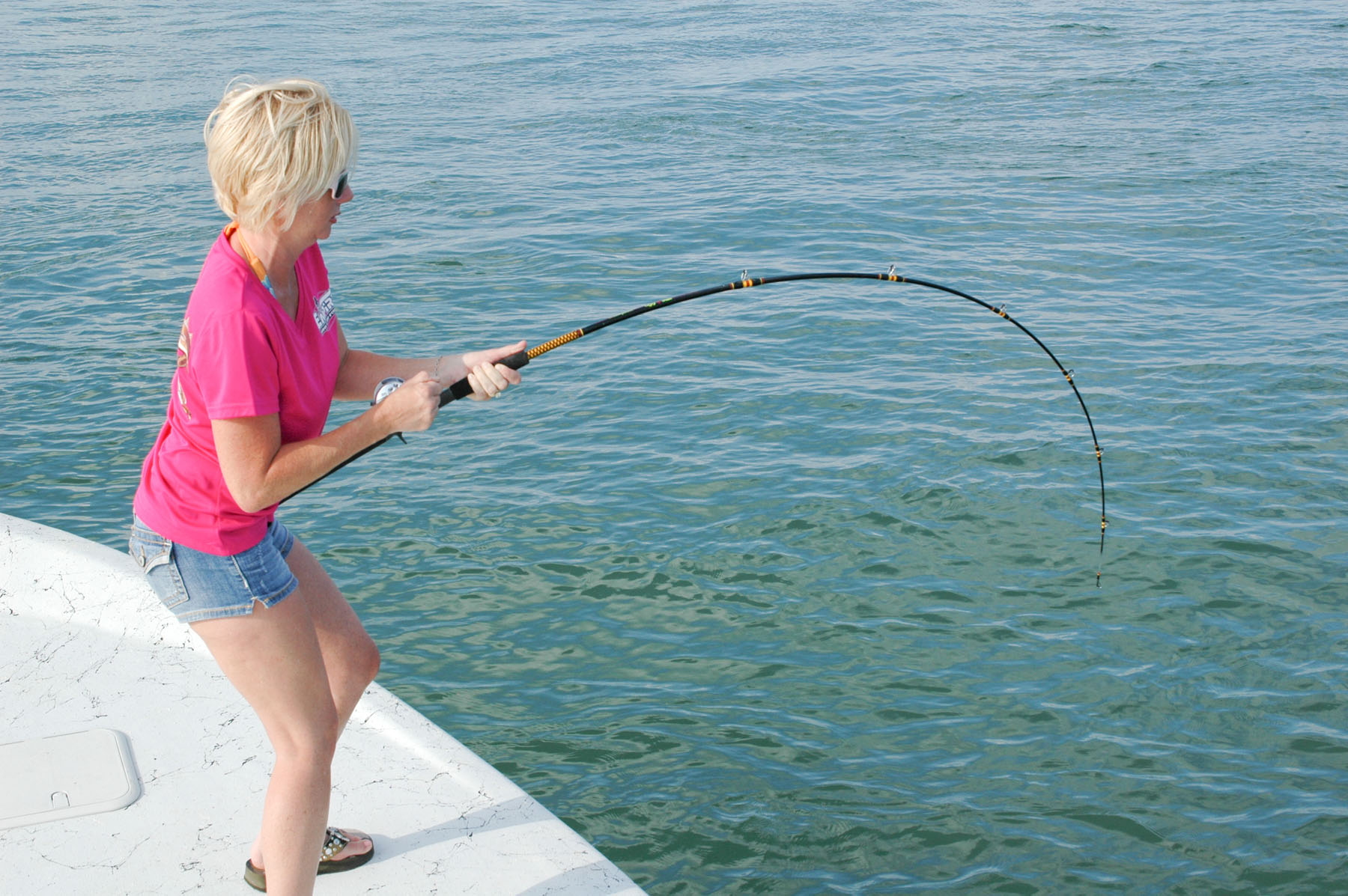 Have you ever had your reel nearly emptied by a huge redfish, fought it to the boat and released it–and on the very next drop hooked another before the jig made it halfway to bottom? How about so many drag-screamin' jacks that you simply could not reel in another? Sound like a fish story? Well indeed it is–but it is also true!

Before I go any further I need to make a confession. I turned my back on this kind of action for more than two decades. Oh, I was well aware that people caught lots of fish at Port O'Connor's Big Jetty. And I wish I had a dollar for every time I passed by or through those rock walls, headed out to wade the surf or some platform beyond–lines of boats full of happy people hanging onto bent rods.

Twenty years now, my fishing focus has been wading shallow water and chunking plugs, spoons and plastics. If I cannot see it through that lens it simply does not interest me, at least not until about a month ago. I really do not see myself as a trout snob; heck I also target redfish, flounder, snook and sometimes even drum. But hey, if you want to call me a trout snob...

So anyway, we were at dinner one evening with Jeff and Dawn Larson and Jeff was regaling us with tales of all these bull reds and giant jackfish his clients have been reeling in at the jetties. When he suggested we should join them in the morning, he had no charter but was taking Dawn, Pam's eyes bulged as wide as saucers.

"You want me to go jetty jerkin'?" I asked, trying not to spew wine on everybody.

"Yeah man, it's crazy. You'll have fun!" he replied. And of course my little bride who has yet to meet a fish she doesn't love was already making it a double date and who would bring what.

We pulled out of Shoalwater Flats at first light and roared up the ditch toward POC. Clearing the little jetties we were met by moderate chop in West Matagorda but Jeff's big Mowdy Cat skipped through it like we were running in a bathtub. Within a few minutes we joined the dozen or so boats already congregated under a massive flock of birds, and more were on the way.

Gulls, terns, pelicans and frigates were hovering, wheeling and crashing while every species of bait was fleeing in every direction. Huge blowups and tail slaps punctuated the current-boiled surface while a herd of jacks "greyhounded" so near the boat that I couldn't help but duck for cover.

Jeff handed Pam and I both a heavy rod baited with frozen sardines and on his instruction we lowered them into the melee. Before I felt the weight hit bottom Pam's rod was bent to the handle but nobody wanted my sardine. That was OK though, she was having a ball and I had photos to shoot.

Pam fought that bull until the current carried us well out of the channel toward Bird Island. We took several minutes to make certain it was fully revived, put the rods up, slapped high fives and prepared to run back and do it again.

By now boats were jostling this way and that, fighting fish, and trying to get back under the birds. We heard familiar voices and turned to find David and Sarah Clark coming alongside in their Majek Illusion with ear-wide grins.

"You got here late," David called over the hum of the outboards, "we already caught four! You need to try one of these and with that he tossed me a big 4-ounce jig that looked more like the handle of an oversized butter knife than a fishing lure.

Back under the birds, Jeff got Pam and Dawn baited up and they were about to drop down as I finished tying David's jig to another of Jeff's heavy baitcasters. Now don't get me wrong, frozen sardines will catch lots of fish–but that jig was as close to dynamite as anything I've seen. And of course the "artificial" element met my snobbish preference.

Seriously, it was only halfway to the bottom when I realized the line was no longer going straight down and the spool under my thumb was spinning way too fast. Set the hook!

I reared back into the heaviest jack I have ever landed, and man did it put up a fight. Dawn tied into a smaller jack and Pam had another mule of a redfish. The current was so strong that by the time my jack finally gave up we had drifted the full distance up to Bird. I was beginning to change my mind on jetty jerkin'.

And so it went for nearly two hours, huge jack after jack and so many bull reds we had to verify the count by the images in the camera. By the time the incoming current was playing out and the birds broke up; we had shredded leaders, sardine juice and fish slime all over the decks–reminiscent of a headboat trip I made out of Freeport a long, long time ago.

Needless to say we all needed a beer badly and the girls took a perch on the leaning post to do just that while Jeff and I swabbed the deck and got all the gear situated for the ride home.

Did we have fun? Hell yes! Have I adjusted my fishing focus? Hmmm–a bit, perhaps. OK, it's now wide enough that we've been back to the jetties several times, with the grandkids twice. And you know what? We are going again in the morning.

Strong incoming morning tides coincide with summertime moons at full and new phase and the peak of this flow is the catalyst. If this type of fishing is new to you, don't be shy but just sit off to the side for a few minutes and watch. You will see boats of every size (we saw a tiller-steer jonboat one day) and anglers from eight to eighty. Everybody has a ball when the bite is on. Get there early though; you won't want to miss a single minute. It's that good!

While the same rods and reels you would use for trout and redfish on the flats can be pressed into service for bull reds and large jacks, a step up to the 20-pound class is probably a better idea.

Large fish are tough to subdue on lighter tackle and, after all, this is primarily a catch and release fishery. The best strategy for accomplishing a healthy release is using enough tackle to win the tug-of-war within a reasonably short span of time.

Bimini Bay's Tsunami line includes the TSSD2000L levelwind and TSC5000 Classic spinning reels. Pair these with suitable rods from their Airwave collection and you can have tough and reliable tackle for the class of fish we find at the jetties; without breaking the bank.

Spooling with 30-pound mono or braid and adding three to four feet of 80-pound mono leader is recommended.

Any fresh or frozen bait (sardines or cut mullet) will usually work like a charm but I prefer jigs simply because I do not like fooling with natural baits or the non-target creatures they attract. Oh, and I am a bit of a snob.

Given the current strength and water depths, knife-style jigs of 3- to 4 ounce size, worked vertically, are very effective. Lowering to bottom and working successively higher in the water column will identify the most productive depth. Some days they're way down there and other times you will find them suspended. Counting reel cranks to bring the jig back up to the preferred zone is a good method. Work that jig aggressively, both up and down and side-to-side. Hang on!

Release them in good shape!

Bull reds are prime spawning stock and it is the angler's responsibility to insure they have been properly revived before releasing. Keep the photo sessions short. Several minutes of vigorous back and forth motion to move water through the gills is recommended; always with the fish in upright position. The tail thrusts will let you know when they're ready to go!