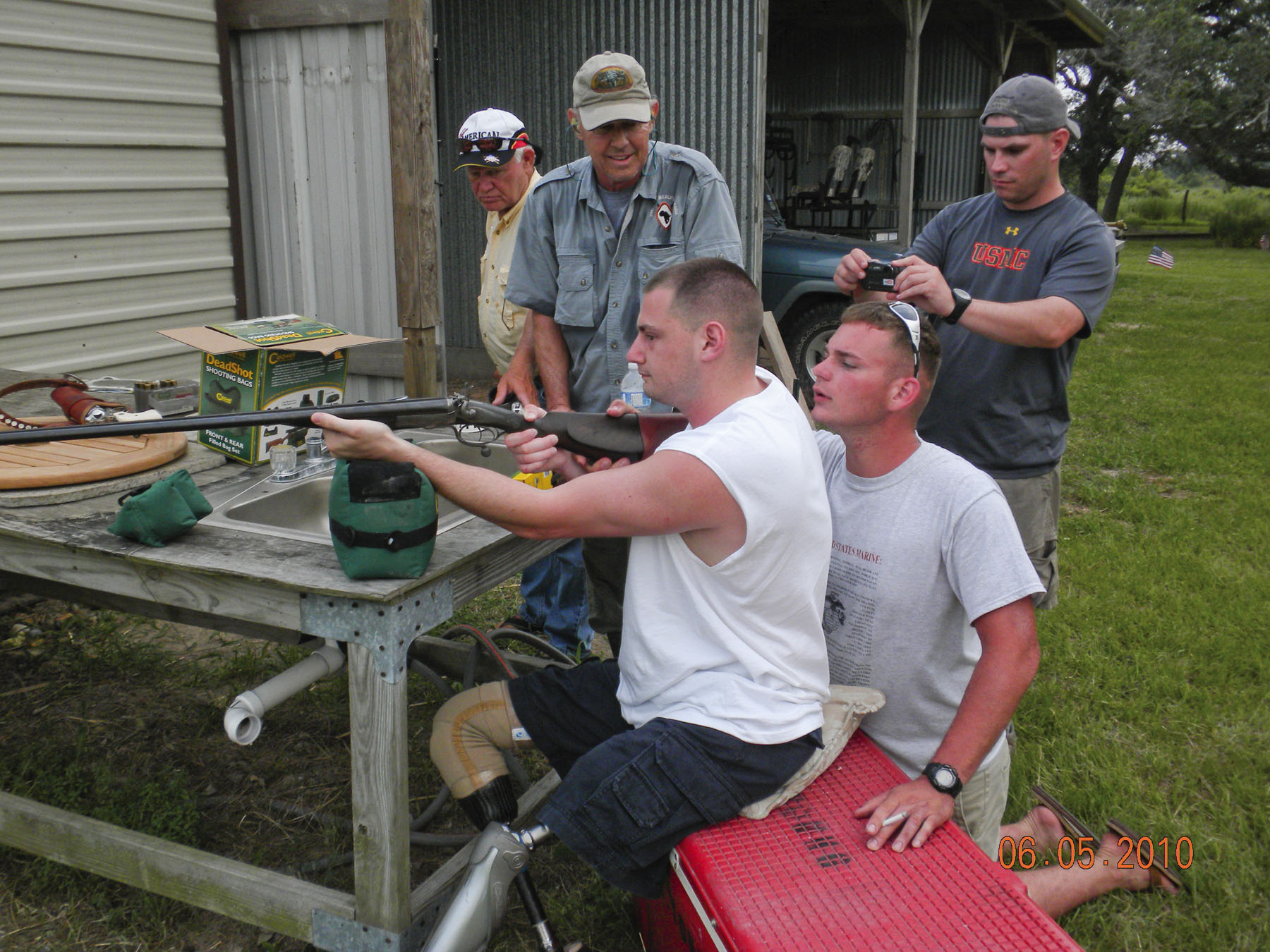 A few weeks ago I volunteered to write an article to chronicle an upcoming fishing weekend in the Port O'Connor/Seadrift area for a group of combat-wounded Marines sponsored by Combat Marine Outdoors (www.combatmarineoutdoors.org). With no experience as a writer, and with illusions of becoming the next Robert Roark or Joe Doggett, I began scripting a story in my mind using military jargon like "assault" and "coordinated attack" to narrate what would be our fishing strategy for the outing. With that mindset, I imagined writing copy describing our flotilla - "speeding toward the white structures on the horizon (Hasselman's Bay Club), eyes alert for anything that might compromise the mission." When the weekend came to a close, I forgot any ambition to write a fishing article and only hope I can describe the emotional effect the experience had on everyone involved.

Combat Marine Outdoors began in 2005 with visits to wounded soldiers at the Brooke Army Medical Center in San Antonio. The founders recognized a need to give Marines, sailors and other service members, an opportunity to get away from the hospital into an environment of camaraderie to accelerate their recovery from traumatic combat injuries. Many of these warriors did not want to leave the hospital. Hunting and fishing became the vehicle to encourage them to step back into the society for which they have sacrificed so much. The fellowship of each outing has had a positive effect on the physical and mental healing process of these soldiers. To date, over one hundred of these brave heroes have experienced life-changing outings on Texas ranches, bays and lakes; touching the hearts of all they have met.

We fished Espiritu Santo and San Antonio Bay from Lighthouse Cove to Panther Point for two days and witnessed the youthful exuberance of young men from all parts of the country catching their first redfish or trout. As always, being on the water was a magical experience, but the real magic occurred when we were ashore.

Each evening after dinner when libations were served, the Marines, their escorts, hosts and guests would gather to relax and visit. The fire pit was a tradition I thought we might forego in the warmth of a June evening but it added ambiance and helped keep the mosquitoes at bay. The sessions began with prayer for the safety of comrades who continue to be in harm's way, for guidance to our great country in these trying times, and requests that these brave men and the thousands like them back home from their service to America might have a bright future. Moderated by Master Gunnery Sergeant, Art Garcia, and the President of Combat Marine Outdoors, Rusty Hicks, the Marines and our group exchanged stories about family, friends, and hopes for days and years to come. As the fire faded and the stars became bright, some of the Marines would tell of experiences in places I can't spell or pronounce. Some were able to describe events leading to their injuries and their thoughts then and now, some could not. It was an awesome experience.

We made lunch reservations for thirty on Saturday and Sunday at Josie's Mexican Restaurant in Port O'Connor and Barketts Seafood Restaurant in Seadrift. The Marines were greeted by owners, staff and patrons of both establishments with standing ovations, hugs, tears and encouragement. We thank Mama Josie and Forest Christy for their hospitality and generosity to comp both affairs, as well as Mustang Creek BBQ for a delicious Saturday night protein fix. David and Sarah Clark provided overflow accommodations at Shoalwater Flats and prepared a lavish lasagna dinner for all on Friday night. The Mike, Jack, Jacquelyn Campbell and Randy Boyd Band played at the ranch Saturday night. Jacquelyn Campbell, a pretty and talented A&M student distracted our young men from important fishing matters with her songs and sparkling personality. The boats and guide services were provided by Beryl Bailey, David Boyles, David Clark, Rusty Hicks, James Jurach, Forrest Vollentine, Frank Wimbish and Stan Young. Special thanks to Bob Zorich and sons Robbie and Brett for donating the trip to Combat Marine Outdoors and we also want to express thanks to the volunteers who placed American flags along the routes we traveled to and from the water.

The abilities of these men to participate in the weekend's activities amazed us. Cpl Bradford was a victim of an IED explosion in 2007 while on foot patrol with his unit. He lost both legs above the knee, part of his left hand, was permanently blinded in both eyes and lost part of his intestinal tract. Over the past three years he has faced numerous surgeries and difficult rehabilitation. His demeanor is always upbeat and positive. He told me he had just completed a ten mile Marine march through the Mojave Desert, saying "the hard part was when the sand became soft and deep." He plans to run in the Marine marathon.

Matt sat on the bow of the boat and skillfully cast his lure to bait and other signs in the water as directed by his boat captain. He mastered "walking the dog" and jigging soft plastics purely by feel, again with direction from the captain. Matt displayed Marine marksmanship with a 125 year old Holland & Holland 500 Express owned by David Boyles when he shot a bull's eye at 40 yards. This was accomplished with the help of LCpl Josh McDaniel who called the elevation and alignment over Matt's shoulder. These guys genuinely care for one another and take pride in the successes of their Marine brothers.

Matt has re-enlisted in the Marine Corps and will be assigned to visit wounded Marines in hospitals and rehab facilities to be an inspiration to their continuing rehabilitation. This is but one story of many that made the weekend a remarkable experience.

As you plan for summer and fall outdoor activities, offer a prayer of thanks and blessing for these young men and others like them who have sacrificed and will continue to sacrifice so much. Our liberties are not without cost. We have the right to speak out and disagree with the most powerful among us, to worship a God someone else does not believe in, to proudly vote for someone our neighbor abhors, and to reap the fruits of our labor. We have these things because men and women like these Marines gave all they could to preserve our way of life.