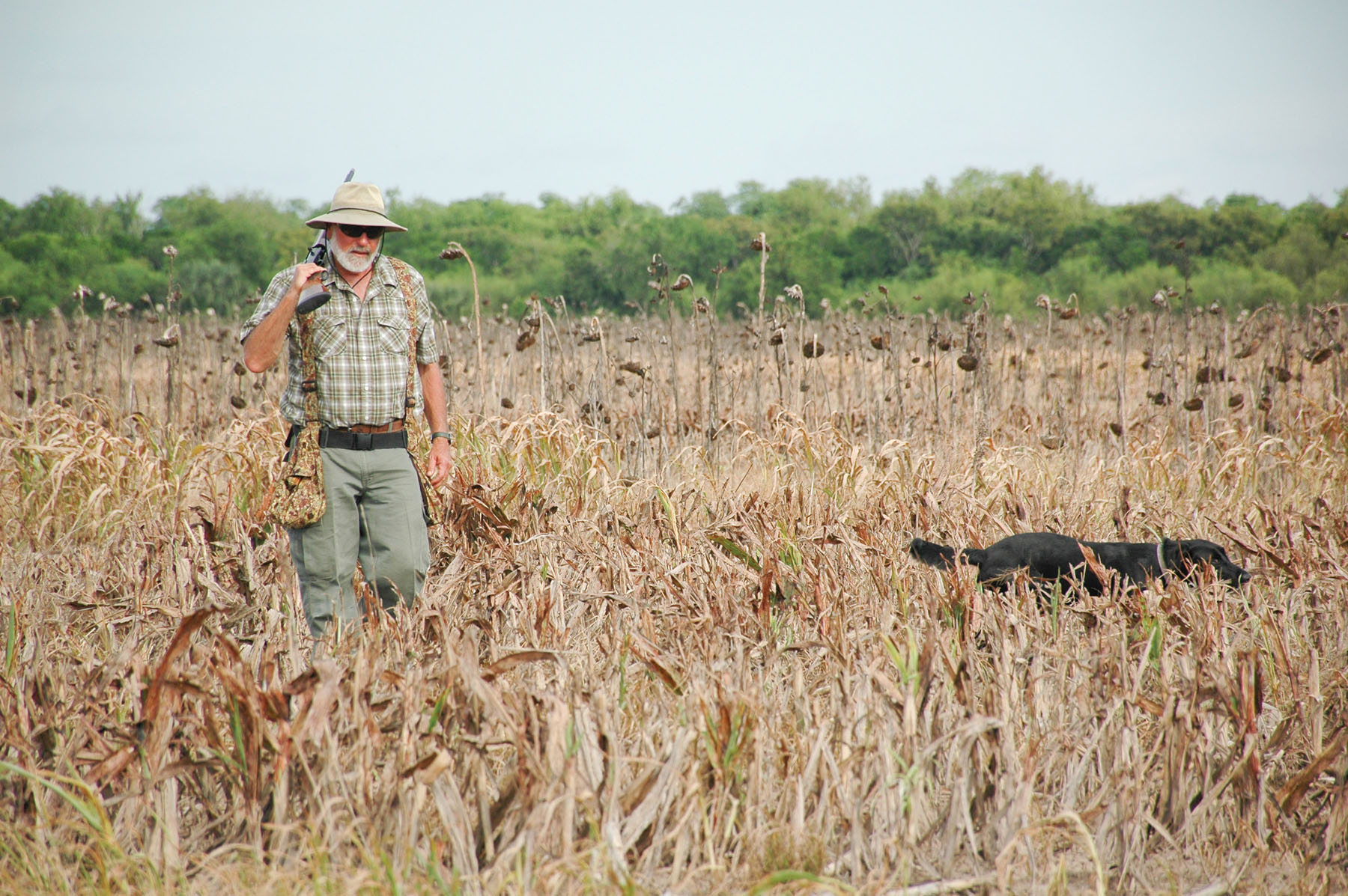 Me and Wink. With as many doves as were dropping our dogs received a great workout.
In this high-information age I would be willing to bet that most coastal fishing enthusiasts have either experienced firsthand or at least heard the term, cast-n-blast – splitting a day between bay fishing and wingshooting.

Pam and I have been combining bay fishing with duck hunting and dove shooting for a long time, long before you could Google it and way before Facebook.

September's teal and dove seasons and the first split of "big" duck during November are prime times, given that the weather then generally suits combination days better than later duck and dove seasons in December and January. Pam deserves all the credit for getting us involved; here's how it happened.

You first need to understand that I am a hard case when it comes to duck hunting. My dad began dragging me around in the marsh before I could heft a shotgun and I blame him that chilly mornings, Labs, decoys and the rush of wings own my heart and won't let go. My only truly bad duck days are when I don't hunt. I also suffer a hopeless addiction to coastal fishing. But, until Pam forced me otherwise, I forsook fishing for ducks during duck season.

Now Pam's a duck hunter too, but on limited terms. She hates the cold and when the action isn't fairly steady she is easily bored. And if you haven't already figured it out, she is also hopelessly addicted to fishing.

We were way back in the Matagorda Island marsh that beautiful November morning and the hunting was slow as pretty mornings can be. I was determined to wait them out but she thought we should have been fishing. "Tomorrow," she announced, "I am bringing my fishing rods. You can wait for ducks if you like, but I'll be fishing." As she spoke we had mullet flipping in the decoys and redfish crashing against the cordgrass. Tough to argue.

The next morning was a weather repeat. A dawn flurry of pintails and redheads left us sitting-waiting-hoping. Pretty soon, true to her announcement, my dear wife vacated the blind, tied on a gold spoon and took off wading the edge of the spread. What's a man to do? By the time I had the dekes collected she had a red on her stringer and was fighting another. Our cast-n-blast career was born and the rest, as they say, is history.

Over the years our cast-n-blast adventures have given us exceptional opportunity to enjoy the outdoors. Living in an area of abundant ducks, doves and great fishing, it seems natural to gun teal at daylight and spend the afternoon fishing. Then, come south zone dove season, we reverse the order, preferring afternoon shooting. During big duck season you can flip a coin, which way to start the day. It's all her fault.

Last September, good friend, Mike Sutton, called and invited us to participate in a media event he was putting together. Mike had recently become the new owner of Get-Away Adventures Lodge at Port Mansfield and was keen to meet more people in the Texas outdoors media.

Get-Away is an on-the-water lodge where anglers can book full-service stays that include guided fishing and they also host do-it-yourself anglers who bring their own boats. Staying at the lodge, even if self-guided, is a great option for maximizing fishing opportunity, excellent dining and comfortable lodging in this tiny fishing village. Sandra Garza, lodge general manager and chef, puts great effort into insuring you will be comfortable and very well fed. Hospitality honcho, Robert Wilson, waits on you hand and foot if you let him. Sutton has a great team.

Fishing the Lower Laguna Madre from Port Mansfield has long been legendary for trophy trout and some of the best redfish action this side of Heaven. What lots of folks do not know is that dove shooting in nearby Rio Grande Valley grain fields takes a backseat to no place in Texas. Sunflower fields at harvest time can inspire images of Argentina. So, heck yeah–we jumped all over Mike's invitation.

Mike had arranged his Get-Away guide team to get us on the water at daylight and then back at the lodge in time for lunch. A short siesta was thankfully included before we would drive to the dove fields. Dinners would be back at the lodge. Two long action-packed days–great camaraderie–lots of fun.

Pam and I fished with Capt. Teddy Springer the first morning, longtime Get-Away guide and Lower Laguna veteran. Teddy had three spots in mind; one we would hit early with a promise of every-cast action for "keepers", another for (hopefully) bigger trout when the solunar minor kicked in around 9:00, and then finishing up in a favorite redfish hole. If Teddy was never a drill sergeant, he should have been. He knows his business and doesn't waste time getting after it. He is also a top-flight angler and fishing guide.

The first stop gave us lots of bites as promised. Right on Teddy's prediction at the second stop Pam nailed a solid six-pound speck in the shoreline gut he directed her toward. We made a bunch of photos and sent her swimming, no worse for wear. We made the quick run to the redfish hole and found them stubborn but managed to trick a couple decent fish on slow-rolled plastics. Ol' Sarge came up with the boat and said we had to leave or we'd miss lunch.

Stuffed with Sandra's lunchtime handiwork, we did the siesta thing and then caravanned south to the dove field.

David Sykes of the Corpus Christi Caller-Times joined Pam and me with our Labs and mojo decoys in the shade of an oak motte that had been left standing partway out in the field. The rest of the crew headed farther down but when the shooting got going we all sort of congregated. We were right on the Mexican border, in fact, if you allowed a southbound whitewing to sucker you it would fall into the gorge of the Rio Grandeun-retrievable even for the dogs. I learned the hard way, twice.

The second day's schedule was nearly a carbon copy of the first. We fished with longtime friend, Capt. Ruben Garza, Sandra's husband and, he too did a fine job of putting us on the type of fishing Port Mansfield is famous for delivering. Ruben showed us some backcountry we had never fished and it was teeming with reds. The second afternoon in the dove field, Ruben and Craig Nyhus of Lone Star Outdoor News put on an exhibition, crushing high-flyers and neatly folding birds coming in low for feeding toward dusk. We had another great shoot and with so many birds falling in the stubble our dogs got a fantastic workout.

It ended way too quickly, as great trips always do. Sandra served up a belt-buster breakfast and Robert was busy everywhere at once. We reluctantly made goodbyes to our fellows in the media, with hugs and handshakes all around. Mike put the icing on the cake saying, "Y'all mark your calendars for South Zone Special Whitewing Season next September."