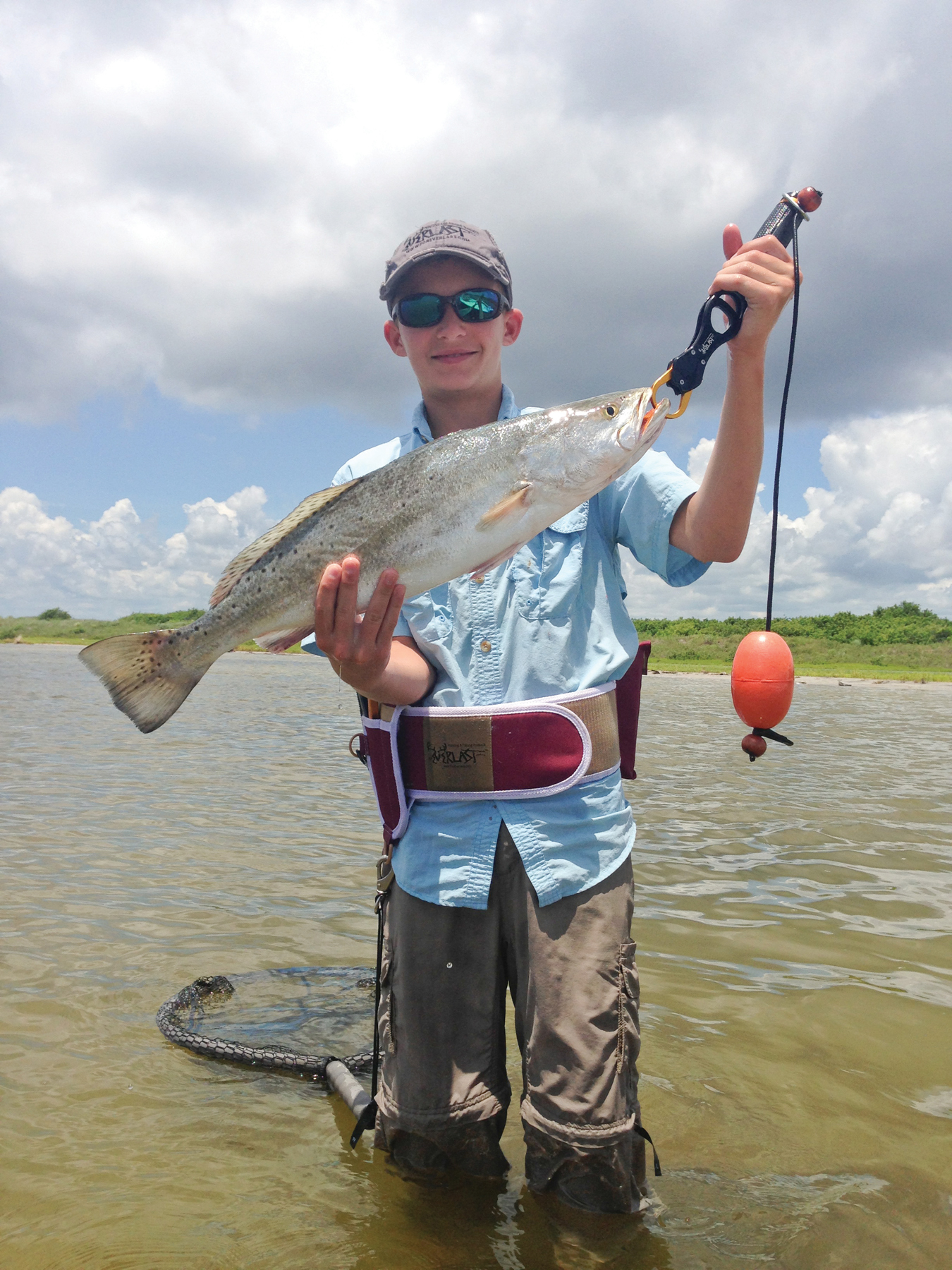 With summer hitting full swing and the kids ready to have fun, my family and I decided to break away for a few days of coastal fishing in early June before the hectic All Star Baseball schedule got in the way. If you have children in sports I'm sure you understand.

Now everybody has their favorite places to spend time with those they love and, for our crew, being on the boat with no one else around ranks right up there with family time spent in deer stands and duck blinds. The outdoors is our get-away place, far from life's interruptions; if you know what I mean.

This time of year Baffin Bay and all that it offers in tranquility and fishing is easily one of our favorites and we have made many fine memories amid her rocks and clear water. Little did I know that this trip was going to turn out to be so epic for of all us.

The first morning, I turned the boat into Nighthawk Bay, figuring to make a quick drift and hopefully land a few and get things off to a good start. Shortly into that first drift my wife, Amy, and boys Ty and Layne, let it be known that they did not want to stay. Amy said, "I thought we were headed to Baffin." I immediately pulled the drift sock and we were off.

The wind that morning was basically a non-factor and the slight turn it had made to the north really got me to thinking hard about where I wanted to start the summer off. Being that the family likes to wade with me I am always thinking of sure bottom and hard sand in particular. The light north breeze and hard bottom equaled a no-brainer move to Tide Gauge.

Tide Gauge Bar, for those who do not know, lies along the shoreline of the famed King Ranch. This long bar of sand has been a favorite of Baffin anglers for many years, its gentle slope and near constant shape along its length makes an excellent tide level reference–partially or nearly exposed on low tides and sometimes covered by several feet of water during higher tides. After a 35-minute boat ride we were gliding into the Tide Gauge and making preparations for our first wade. Very few bites at our first stop prompted a move and it would turn out to be a good choice for more reasons than one.

Idling in for our second stop, I could see bait working in the shallows. Another boat had beaten us there but there was plenty of room in this particular area to spread out and share the water. As we began fishing I noticed the guys down from us landing fish after fish so I knew there were plenty in the area, we just had to settle in and get on the bite.

I noticed one of the guys down the way kept looking our direction and then began waving for me to move that direction which, in this day and time, really took me by surprise.

After a few minutes he yelled, "Hey Mike, get over here." I yelled back, "Well, I am not Mike but I can be today as I can see you guys are really on 'em!" We both laughed at his mistake and then he said, "Well, come on over anyway. Bring your family and join us. There's plenty room and plenty of fish here." I just about had to pinch myself to see if this was really happening but soon after we joined in the fun.

Both my boys moved up and the guys we had just met were handing them rods and pointing my sons in the right direction, like we had known them for years.

I looked to the Heavens and thanked God for His reassurance and blessing, knowing that the old homage is true, "Birds of the same feather truly do flock together."

It gave me a sense of great pride to be more than a father that day; to be a part of an industry that truly does care about others. That there are still people out there that do this for what it is, not just chest pounding, but for sharing these gifts with others.

Well our fun ended pretty quickly as a storm had formed out over Baffin Bay. We took refuge with our new friends on the porch of a nearby floating cabin where we tied our boats and waited for the squall to pass. We all got to know each other quite a bit better on that small porch.

During that time on the porch my phone went off and it was one of my employees checking on us. I wondered how in the heck he could possibly have known we were in a storm but, it turned out, friend Robb Guerra had seen us earlier that morning and did not see us return back by them. He began making calls out of concern for me and my family and that's why the phone rang. God reassured me again with that phone call that I am truly blessed to be part of an industry where people truly care. An hour or so later I decided it was safe to get back on the water. We said goodbye to our new friends and headed back to port.

The story does not end there. My son, Ty, and I were itching to get back on those fish as the bait was thick in the area and we knew that the next morning could be really good with light wind predicted again. Amy and Layne decided that the storm had been enough for them, sleeping late sounded better. So, early next morning, Ty and I loaded up and we were headed south once again.

With light wind and a moonlit sky we got an early start with the moon about to set in the west while the sun would soon be rising in the east–perfect setup for a good bite. We drove up to the same spot we had been the morning before and to say bait was working would be a huge understatement. I looked at Ty and I am sure he could see the spark in my eyes, as I could see in his and, he said, "Dad, let me out!"

We both slid out of the boat with quail chirping from the King Ranch shoreline and bait active up ahead. We just knew it was going to be good. On my second cast I landed a dream fish–a true 30-incher weighing just over 8-pounds on my Snatch Em tool. Ty was catching them cast after cast with his largest that morning measuring 27-inches, in the 6-pound range.

We caught an unbelievable number of fish and when all was said and done we kept our limit of trout over 3 pounds, and a few redfish to boot. We released all our larger trout as we typically do after photographs but the 30-incher will take a spot on our wall to commemorate this awesome adventure.

After we finished fishing that morning and were fixing to head in, I asked Ty to join me on the bow of the boat and we prayed together, giving thanks for the time we were able to share and lay witness to God's beauty that morning. My Father's Day came earlier than expected, those two days in early June, but in all honesty I have Father's Day every day as I am so very blessed to be able to share my passion for the outdoors with my family and my friends. I also believe I am very blessed to share this business and industry with people who passionately care for one another and the fishery that we have been given.

I want to say a special thanks to those guys who invited us over to fish with them, and also to the employees and friends who made a special effort to check on us during the storm. These gestures made it much more than just a fishing trip, it made it more than special to me. I want my boys to see this world through acts of kindness–something we all need lessons in from time to time.

I was asked the other day to what do I attribute our success in business and the answer was very simple and summed up in one wordGod! He is the centerpiece of our business and our family and for that reason we are humbled.

"Family, friends, and the great outdoors is who we are." Billy Gerke-ForEverlast