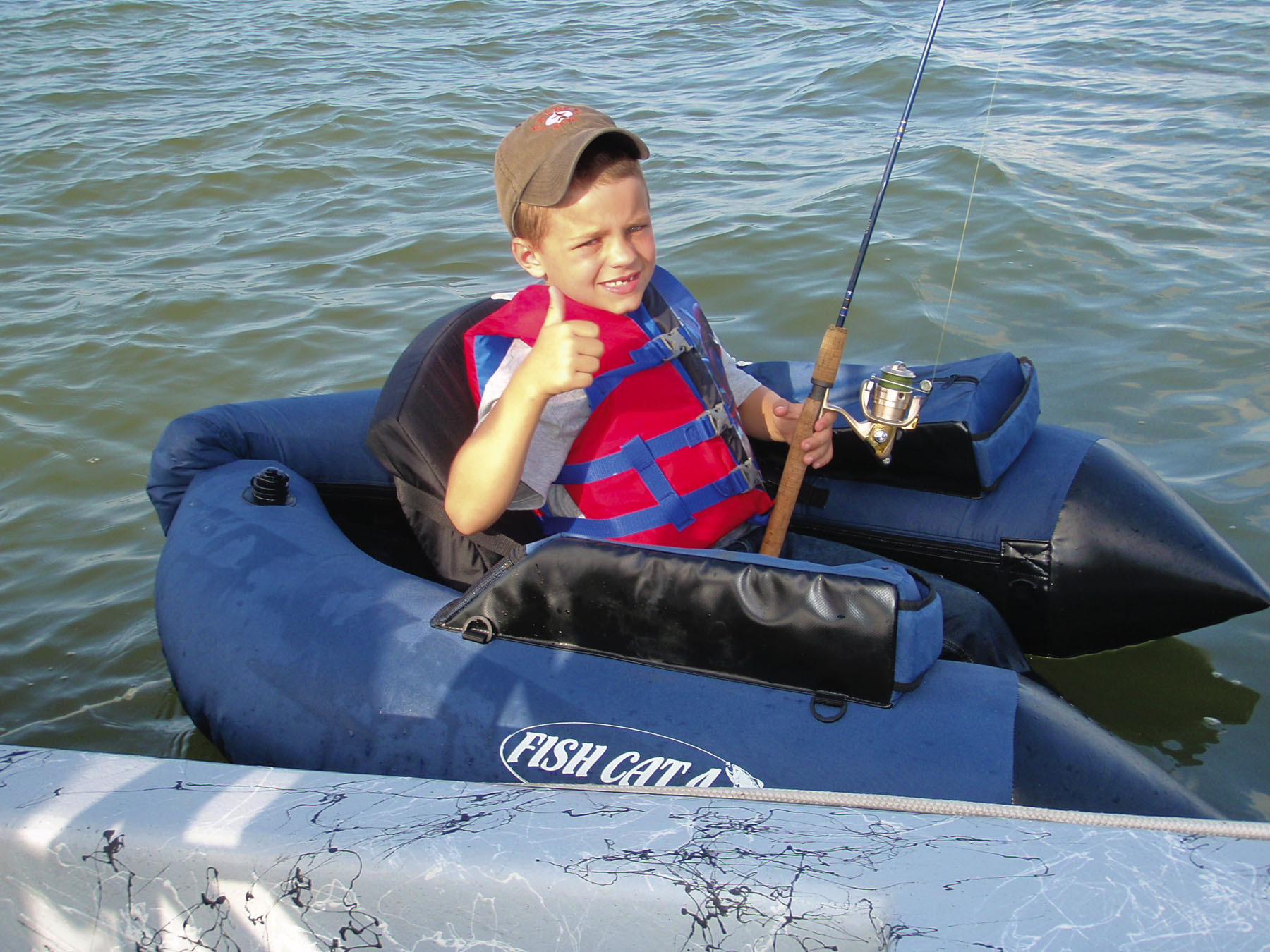 They named him Tyler; son of Ryan and Heather Thomas Heather is my daughter.

On the day he was born one of the first things that came to my mind was how long would it be before he could go wade fishing with me? Heather reminded me that first we needed to get him weaned. She also noted that infant carriers do not come equipped with floats. I see this as an obvious deficiency in our manufacturing system. So Papa had to settle for carrying him in his proud arms aboard the El Pescador while it was up in a sling.

My plans for making him a fisherman were plain to his mother. After all, I had Heather and her sister throwing Zebco 202s with a rubber weight when they were just three-year-olds. More than once upon arriving home from work, Dad had to retrieve the Mickey Mouse Zebco from the oak trees or telephone lines. It made complete sense when Tyler turned three; Papa had him in the backyard throwing a Scooby Doo rod with a plastic fish on the line. His goal was to hit either the cat or his sister with the orange minnow. Never did hit the cat.

The next year, Papa felt it was time to give up the Scooby Doo and try a spinning reel which he learned with surprising ease. The release of line from the index finger perhaps being even easier than coordinating the thumb release on Scooby Doo. This was all in preparation for his fifth year when a sit-in float tube (Lost Lake from Bass Pro) was purchased and attached by line to Papa's Wade-Aid belt. That year, using a popping cork and shrimp, Tyler was delighted by anything that hit his line. What he didn't like was not being able to cast every ten seconds like his Papa. Plus, that style float had him sitting low, inhibiting his backswing. No matter mission still accomplished he was wade fishing with Grandpa!

The following year, the low seat was corrected with the purchase of a Fish Cat (Bass Pro again) whose seat was much higher and allowed him to cast easily. Much to Papa's delight, he was more content throwing plastics than shrimp as it kept him occupied throughout the wade, bite or not. Fortunately, Tyler caught just enough fish to keep him thoroughly entertained. In one of the accompanying pictures one can see him fighting a redfish. If he hadn't been attached to me, he would have been dragged to China. The photo with him holding the red in question ended in tragedy. After the pic was snapped he turned to his left and the red slipped out of his arms and over the gunwale. Who said you shouldn't cry over spilt redfish?

The Fish Cat with Tyler tethered to his Papa has yielded many hours of great fishing experiences from beautiful sunrises to great hookups. A few tips that would serve you well if embarking on a wade with your little one. Of course, a PFD should be worn at all times. Tyler prefers Spider Man. Sunscreen application is essential, and clear zinc oxide cream (CVS stores) is a good choice as it is water-resistant and doesn't burn if it gets in the eyes. Cover all exposed areas well. On one occasion Tyler's ears were forgotten and that night they practically glowed in the dark. Polarized sunglasses should be worn so snow blindness and possible eye injury can be avoided. Long pants and tennis shoes are important to protect from jellyfish. Try the old baseball pants with long socks tucked under the elastic cuff.

Don't forget to take a snack and drink in a ziplock bag. Little ones are accustomed to having a snack break at mid-morning. In fact, it doesn't hurt Papa to have an Oreo at 9:00 AM either. A waterproof camera comes in handy to record special scenes such as the dorsal fin just yards away from the tennis shoes, (cherished by all Moms, I'm sure).

Also, attach a short line with a stainless steel or brass clip from the float to the child's PFD. This will ensure that if he falls out while you are fighting a twenty-eight inch trout, he won't be in Port Isabel by the time you notice.

All the foregoing should help get your little fisherpersons into the water wade fishing far sooner than their mothers anticipated. Rest assured you will have many memorable experiences. Hopefully, that will not include your little munchkin hooking Papa's ear. If that happens, don't blame me. Blame Scooby Doo.