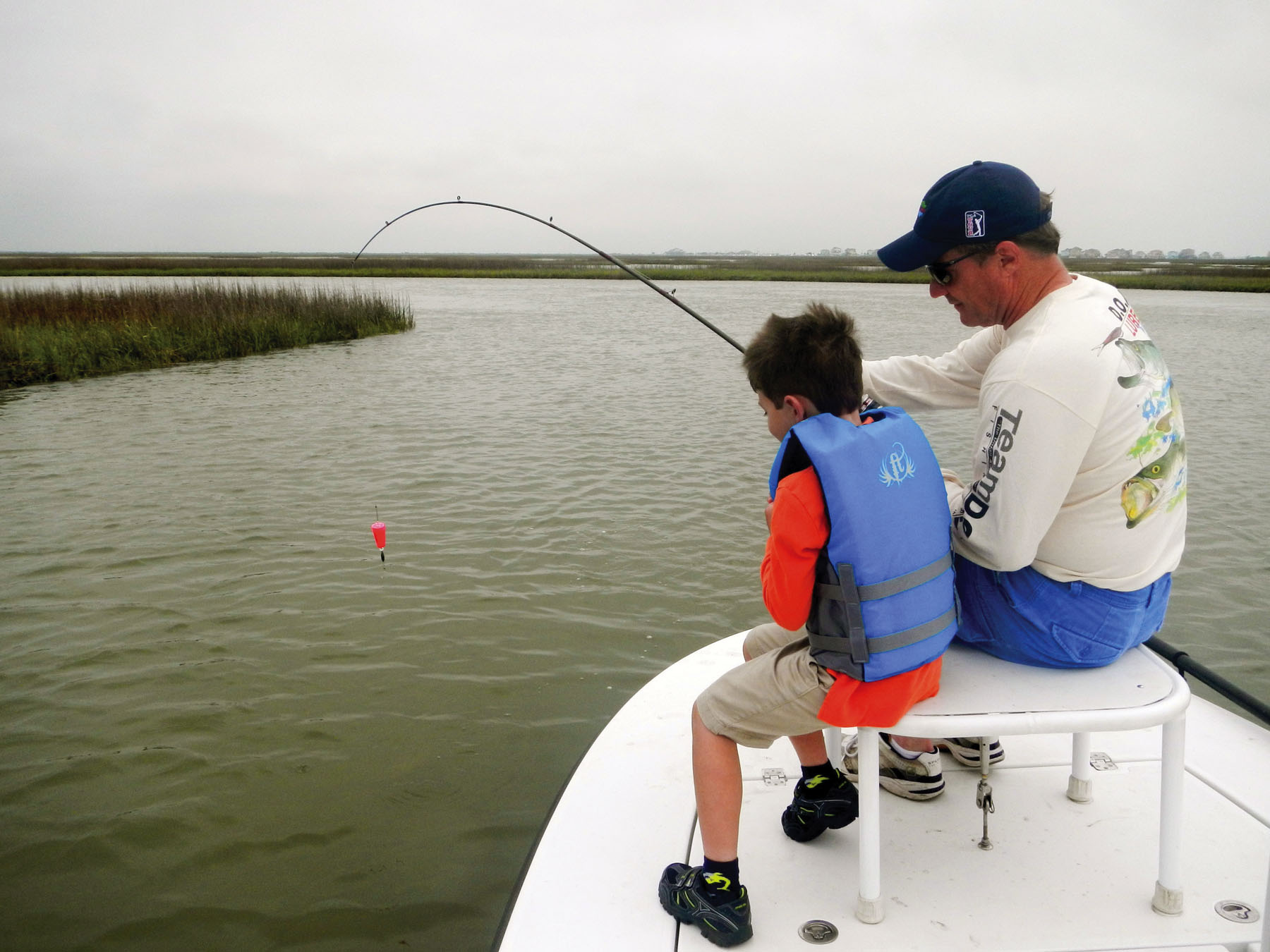 Summer is finally here. After a long and unusually cold winter and spring that wonderfully warm muggy air greeted me as I walked out the door in the predawn to load the boat. For some reason on this occasion it suddenly brought back a flood of memories. I can't really explain why and I honestly don't care. They were all pleasant and occupied my mind as I went about my chores and continued as I drove to the water. Instead of worrying about where I was going to fish or what the wind was going to do to my plan, I just let them roll.

It started with thoughts of getting out of bed before the alarm after being awake all night knowing I was going to get a chance to tag along with my dad and his buddy. The ride across the ferry to Bolivar was a great adventure. Hopping from rock to rock all the way out to the boat cut of the north jetty looking at all that water and wondering what kind of huge fish we'd catch. Exploring the crevices between the granite rocks looking for creatures. Dad struggling to drag the stringer full of trout back down the rocks.

Nights spent on the Texas City dike casting out into the dark and loading the ice chest with croakers. Practicing my casting abilities by trying to hit metal garbage cans. Feeling the slow and steady pull of a crab holding on to my shrimp and trying to reel up to the rocks really slow so mom could net it.

The thought of crabs led to memories of going to the San Jacinto Monument. Chicken necks on strings tossed into the murky water and the thrill of feeling the extra weight of a big ol crab. Easing it slowly to the net and hoping it wouldn't let go.

Wading out around the old fort on Bolivar towing a yellow and white bucket of kicking shrimp. Excited at the prospect of catching trout while scared to death a shark was going to bite my leg off.

Then there was the old green and white boat mom and dad bought. Looking back it wasn't much, but at the time it was the coolest boat in the world. We were no longer pinned to the bank and in my mind there was no limit to where we could go or what we could catch.

Eventually they upgraded to the big Glastron and the bay gave way to the Gulf of Mexico. I can't describe the thrill I felt as we headed through the jetties with the sun just breaking the horizon. The potential was unlimited and when that first kingfish scorched my thumb I couldn't believe a fish could swim so fast.

Eventually memories of my own kids' fishing adventures took over. Randi reeling in her first fish and then yelling for me to get it out of the boat. Holding Erin by the back of her little life jacket to keep a huge drum from pulling her overboard. Watching both of them have a ball trying to release undersized trout without the Rockport beggar dolphin eating them.

So what's my point in all of this? Take your kids fishing.

It doesn't need to be some well-planned full weekend with a guide chasing trophy trout. In fact, it probably shouldn't be anything like that at all. Something I noticed about almost all of those memories, the actual fish caught weren't that important. It was the adventure, the possibilities, the cool things I got to see. As we get older we tend to focus too much on the catching and not enough on the experience.

My best advice would be to plan the trip according to the kiddo. Nobody knows your child as well as you. Take into account their age and attention span. With really young ones don't expect too much. All they want is something to yank their string. Dead shrimp on the bottom should do the trick. Let them catch all the hardheads they want. And when they're done pack it up and leave. Don't force them into staying longer than they can handle just because you want to fish some more. Trips with the kids need to be about them.

The best way to extend the trip is to bring along a net and see what little creatures you can find. Shrimp, crabs, minnows; they're all interesting to young minds. I once spent a slow afternoon of fishing at the jetties snagging random wads of sargassum weed and shaking out the weird critters that live in the stuff. I still laugh thinking about how my oldest called it sarcasm weed.

And don't forget their favorite drinks and snacks. Bottles of YooHoo and bags of Cheetos added several hours to many of our trips. Mom doesn't need to know about that part.

I know we all value our time on the water and sometimes it is really hard to leave those trout and redfish alone, but it's all worth it. The older I get the more I appreciate what my mom and dad did for me. I also wish I'd have spent even more days taking my girls fishing. Two of my proudest days of fishing have nothing to do with tournaments I've won or big fish I caught.

One was when Erin was maybe fourteen and I took her out wading the surf with several of my buddies. She kicked their tails tossing soft plastics and had no problems landing, unhooking and stringing her own fish. The other was when I had Randi on the bow of my poling skiff and she spotted a big tailing red, fired off the perfect cast, twitched the spoon and fought the oversized red without a bit of help from dad.

Now that I have a grandkid on the way you'd better believe I'm not going to miss any opportunities to make some new memories with that little girl.

So, take your kid fishing. Do it right and you'll get as much out of it as they do.