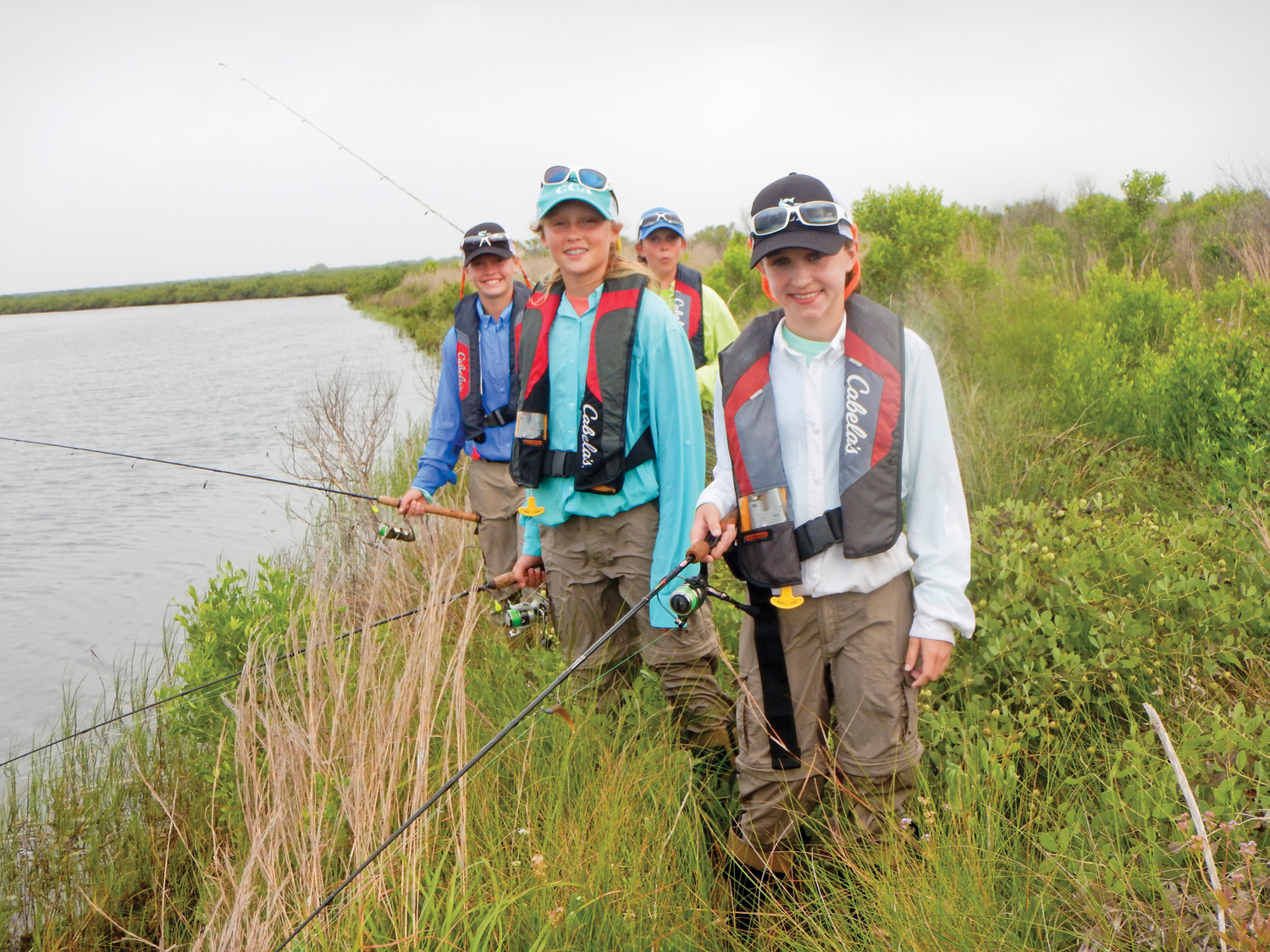 My 11-year-old granddaughter, Sage Thomas, decided it would be great fun if her Papa took her and three girlfriends (Ally Tribe, Karlee Mathis, and Kambrie Toppel) to Port O’Connor and taught them how to wade fish.Of course, this had to be preceded by a shopping trip to Bass Pro and Academy for their “outfits.”The foray to these venues found fishing shirts, pants, CCA T-shirts and hats, as well as stylish polarized sun glasses. Sage’s mom said they looked like a CCA advertisement. The shirts fell short until names were embroidered on each. Now we were stylin’ for the coast!

As it had been for most of this spring, Memorial Weekend was windy and a real challenge to fish in.Undaunted, my girls were up early each day at 5:00 AM, (really, Papa?) eating a hearty breakfast of Cocoa Crispies with chocolate milk on top, and tacos.The first morning started with a quick lesson on how to use a spinning reel, buckling on RayGuard boots, how inflatable suspender-style PFDs worked.The “auto” part of the PFD lesson must not have stuck, as Ally promptly blew hers up.She must have stepped off in a gut that required her to dip low.This was in knee deep water.

The first two days were fished primarily with croakers on circle hooks.A dent in the croaker population occurred primarily because Papa could not keep them alive in the bait well, not because of the fast trout bite.Trout were seldom seen, with the occasional “catfish” to entertain.The wading experience was new to all the girls, so the stingray shuffle and casting in waist deep water proved a challenge.The reels were often draining water despite my pleas to keep them above the surface.Apparently, the girls felt the reels worked better when lubed with salt water.

After one of the sessions, the girls felt the need to go to Sunday Beach.There, the boats were three-deep on the J-Hook side, so a bit of a wade was required to get to the beach, then a walk through the dunes to the Gulf side where 4-foot waves pounded the surf, much to the girls’ delight.Little thought was given to the off-color water, tall waves, and slight undertow, all of which gave Papa heartburn as he herded them closer to shore.Fortunately, the beach foray was mid-afternoon and all beach goers were fully clothed and no unusual aromas wafted over us.

Unfortunately, not many fish were caught the first two days, so I had the girls vote on whether to sleep in the next day or wade fish with lures.The vote was unanimous – fish!The plastics were fun for them to use as there was always something to do (cast) or not do (“Where did my lure go”?).The line of fisher girls wading and working the lures was truly a sight to behold, and their enthusiasm never waned.

Yes, there were mechanical challenges (loops on the reel, restringing, and bottom hung lures), but always smiles and laughter as these young ladies shared their first wade fishing experience, vowing to return, and next time catch limits!