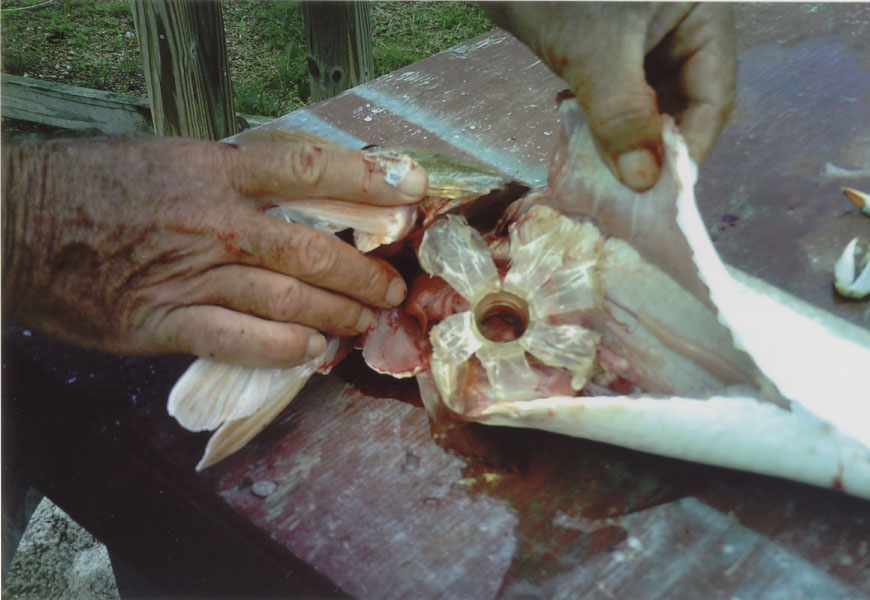 Redfish are known to have voracious appetites and when the bite is on they will hit just about anything. They are also known for being exceptionally hearty. Over the years I have received several photos from readers who got a surprise when they cleaned a redfish. The stomach contents can be downright unbelievable sometimes.

Some are notable for the quantity; one reader reported no fewer than a dozen finger-sized mullet in one he cleaned. Another sent a photo of a large Atlantic needlefish (I bet the beak gave that red a belly ache.) Yet another sent a photo of nearly a pint and a half of crushed blue crab his redfish had chomped down.

Other reports are notable for the genuinely unusual nature of what a redfish might choose to swallow and partially dissolved hooks and even jigheads are not uncommon. One of my buddies caught one with a weedless spoon in it; the irony was that he caught it on a weedless spoon.

Reader, Eddie Vacek, of Danevang Texas brought us some photos recently and I think the red he caught in West Matagorda is our new winner in this category. Believe it or not, Eddie found part of a plastic bottle in the belly of his fish. Why the red ate it is anybody's guess. Surprisingly, Eddie says the fish appeared fat and healthy.

Eddie agreed to share these photos with one request. He asks that we remind fisherman to be better stewards and not discard trash into the bay or let it lie around where it can blow out. A trip down any shoreline filled with soda bottles, food wrappers, and debris of every description will be proof enoughEddie's got the right idea. Be kind to our shorelines, do not litter, and do your part to pick up what others will not.