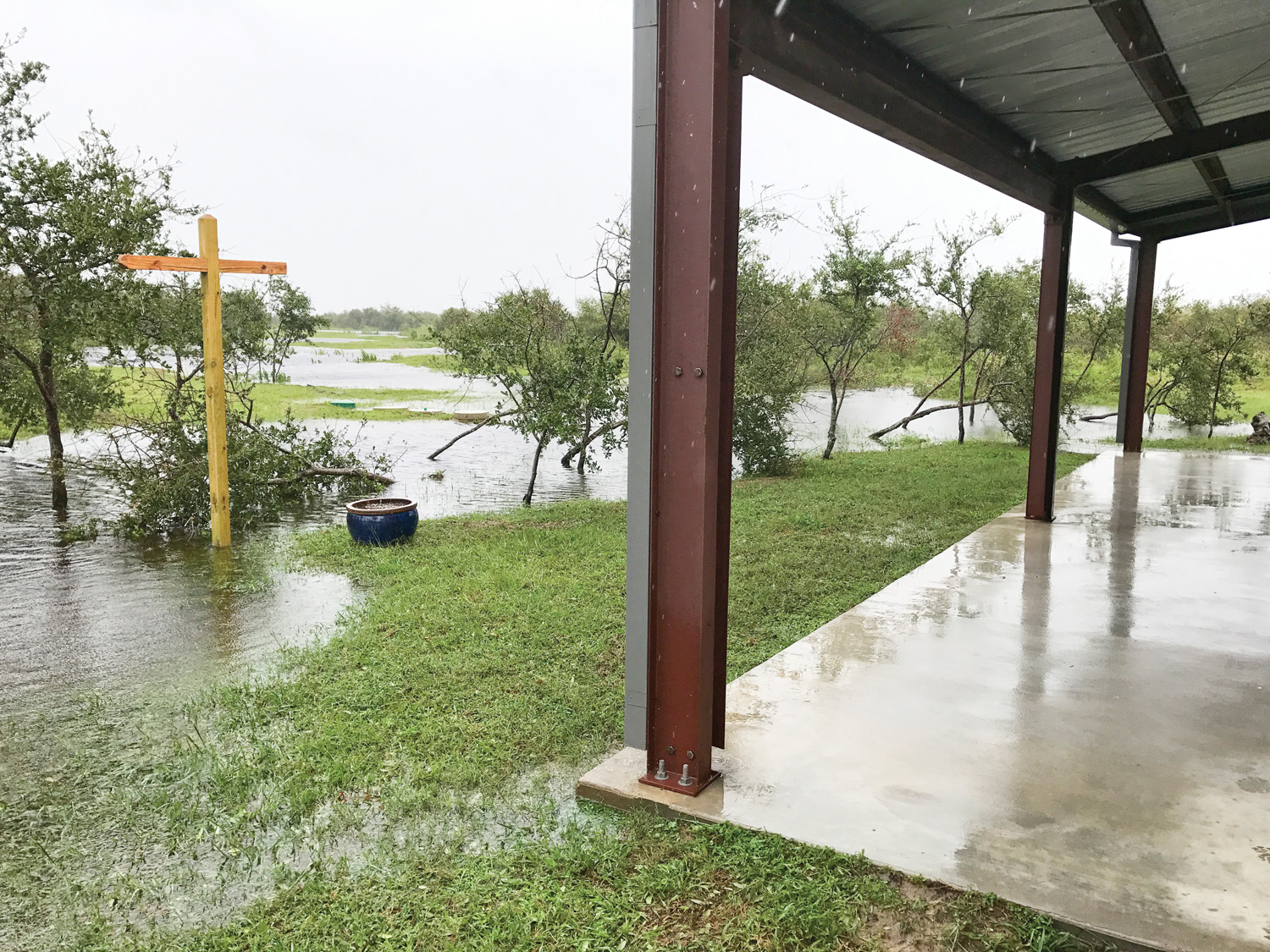 The bird feeder stand survived, the little oaks did not.

It seems like a couple of months ago, but the reality is it has only been two weeks. Camille and I were going over schedules for the coming week. She was to fly out of Houston to attend a trade show in Wisconsin on Monday. I was looking at the weather and, seeing solid rain for several days, preparing to call off some guide trips. There was a small tropical disturbance down around the Yucatan that had previously been named Harvey for its short life in the Caribbean. It had died out, but the remnants were supposed to head our way bringing several nasty days.

I figured it would be a good chance to sit at the tying desk to restock some neglected fly boxes. Maybe do a little maintenance on the skiff inside the barn. Probably wouldn’t hurt to sort through the lure boxes and replace rusted hooks. Oh yeah, it was also time for the first oil change on the new Dargel. “Don’t worry, Honey. I’ve got plenty to keep me busy while you’re gone.”

The next morning I started reading up on this little disturbance. I’m a bit of a weather geek and have a couple dozen sites I study any time something pops up in the tropics. Uh-oh.One of my favorite sites was disagreeing with everyone else and insisting this thing was going to be more than just a rainmaker. The more I looked, the less I liked what I was seeing. I told Camille she might want to go ahead and plan on getting to Houston a couple days early to catch her flight so she wouldn’t have to deal with what was probably going to be a tropical storm or maybe a low-grade Cat 1.

She booked a hotel and had some work to finish up before leaving town. I went fishing. It was Wednesday and Harvey was just a big disorganized blob with 35 mph winds. The Gulf outside the Port O’Connor jetties was slick-flat as far as the eye could see. I’d been on some tarpon and wanted a shot at them on the fly rod before getting rained out for a few days. While I was out there cruising around looking for rolling silver a buddy called to ask what I thought about the storm that was coming. “Eh, looks like it could organize a bit and will probably come in somewhere south of us as a strong tropical storm.”

“Wait…what? It’s already pushing towards hurricane strength? Well crap!”I fished until late afternoon knowing this would probably be the last day on the water for maybe a week. Found plenty of willing jacks and some nice reds but I never found the tarpon.

Thursday was spent tidying up and securing everything with full intentions of riding out a Cat 1.I built a 140-mph-rated home on high ground for a reason. By Thursday evening I was getting a bit uneasy and started getting things ready in case we needed to bail. Friday morning it became obvious it wasn’t wise to stay. I sent Camille and the dogs packing. I had to pinky-swear promise I really was going to be leaving right behind her as soon as I finished a couple more hours of prepping. She knows I’m hardheaded and I don’t think she really believed me. With a knot in my stomach I locked the doors on our newly finished home and headed to my daughter’s house.

We all know what happened from there.

In what was probably not my brightest moment, I returned early Saturday afternoon. After watching the radar all night and throughout the next morning, I had to know. It was a sketchy ride across the Lavaca Bay causeway with the wind still whipping pretty good and water running across FM 1289 in several places. The closer I got the more destruction I saw, and the more nervous I was about what I’d find. Boats were stacked in open fields where boat barns had stood, travel trailers were flipped over and the brand new electric poles along Lane Rd were leaning every which way. The mile and a half dirt road to my place was covered in water up to my doors, deeper in places. The mobile home a couple hundred yards in was destroyed. I gripped the wheel a little tighter and prepared for the worst.

Turning into my gate, there sat my little travel trailer I had lived in while building the house. It was just as I’d left it. Even the little metal porch was untouched. Rounding the corner I found my home in perfect condition sitting on an island. Not a single metal panel was out of place. Water had risen pretty dang close to coming in and my little oaks had taken a beating with several totally uprooted. We skated, otherwise. Huge thanks to Turn Key Metal Buildings for putting up this stout little structure.

I was so jacked up from the nervous ride that I put on my rubber boots and just took off walking to check on the neighbors’ houses as well as the rest of my property. I was able to report to everyone that their places were fine other than downed trees and a mess to clean up. My favorite old oaks in the motte by the pond had survived. My deer stand hadn’t, but it was due for an upgrade anyway. The coolest part was seeing a couple coveys of quail, a flock of turkeys and the little four-point buck that hangs just off the porch every evening. I got back to the house, cracked open a beer and sat on the driveway leaning against the garage as the sun set. Stress is a weird thing. I woke up a couple hours later with half a warm beer sitting next to me and a phone full of messages.

So here we are a couple weeks after landfall. I’ve ripped out enough wet carpet, sheetrock and cabinets to last a lifetime. Friends and family weren’t nearly as fortunate as we were. Some lost a little while others lost virtually everything. I sat down at the keyboard this evening with the intent of writing something about fishing, but that just didn’t feel right. The best thing to come out of this whole mess has been all the calls, texts and emails from customers and friends across the country. It is humbling to know so many truly care. Thank you!

Tomorrow I’ll fish and see what’s going on out on the bay. Next week I’ll run my first charter since the storm. And next month we’ll talking fishing again.