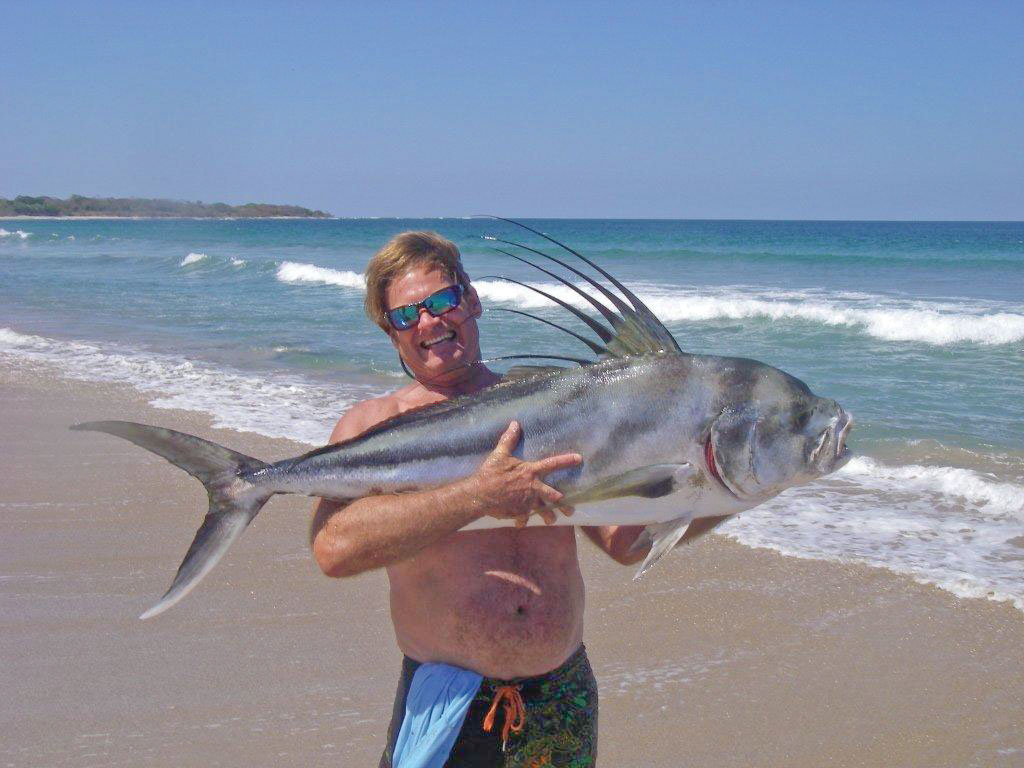 Let me get you up to date on Cliff Webb For those who have been reading with us for a while Cliff Webb used to be a regular monthly columnist. Several years ago Cliff decided it was time to hang up his wade belt and retired from full-time guiding. A lifelong surfer and fisherman, Cliff's dream was to be able to spend lots of time doing both. Cliff now spends a lot of time in Costa Rica but the Laguna Madre is still part of his soul. So - a new chapter for Cliff - he calls this one semi-retirement. He runs a few select charters when back home in Texas and of course, he's still living his dream in the Costa Rica surf. -Editor

I have spent most of my life in the Laguna Madre, drift fishing and wade fishing, covering most of the lagoon. I've caught a lot of trout. I feel very fortunate that I've had some of the best of Baffin Bay's big trout fishing under my belt.

The past couple of years I've had the opportunity to do something I've always wanted to do and that is surf fishing in Costa Rica. I have fished in Mexico quite a few times and had great success on the beach and offshore. I heard of nothing but good things about Costa Rica so I wanted to give it a try.

I made several trips with my family and friends to the northwest coast where the surf fishing was just what I had craved. Miles of open beaches with no crowds or fishing pressure. There are river mouths and estuaries that flow into the ocean. Rocky headlands that attract all species and loaded with sea life.

The tidal movement is very dramatic. It moves from high to low every six hours and can be from ten to fifteen feet difference. This is some substantial water movement . You may be standing on the rocks and then a few hours later the same rocks will be six feet under water. The same thing with the open beaches. You walk down on dry sand then it's underwater in a few hours when you walk back. This water movement really gets the estuaries to flowing, which accounts for a healthy eco-system. The fish travel with this tidal movement. Especially high tide which offers all new feeding areas being flooded.

On one trip down with my friend's Mike Weaver and Scott Easterling, we stayed at a place right on the beach. We started early one morning, the surf was flat. The water was blue and clear all the way to the shore. We had brought our trout rods and reels from home. The reels had 20 lb braided line with 30 lb mono leader. Too heavy a leader and the fish won't hit it and too light a leader and they will cut you off. Mike and I tied on a MirrOlure slow sinker in the mullet pattern. Scott used a MirrOlure Catch 5 suspending bait, this one rattles. We waded across a small estuary, a short walk from where we were staying. Then waded out on the sandy beach about knee deep and cast over the small breaking waves. You learn to time your cast. If you throw it in front of the wave it just pushes it toward shore faster than you can work it.

I caught the first snook about six or seven pounds. Then Mike caught a good one too. Snook were just what we wanted. Not the biggest but, they put up an incredible fight by launching out of the water and flipping in every direction. Hooking them and landing them are two different things. Mike and I were both successful.

Scott had worked his way down the beach toward a set of rocks and was still hard at it. We headed toward him and as we got closer we saw him set the hook. At that time we looked out in the surf and about 50 feet in front of him we saw a huge explosion of white water. We thought it was a giant snook. As we got closer we could see the rooster fish running through the surface with it's head and gills out of the water.

Then Scott starts running as the fish starts to spool him. Luckily, the first hundred yards it ran parallel to the beach or Scott would have been swimming. Scott had an extra wide reel with 150 yards of line. The only thing he could do was put on tons of pressure and hope everything holds up. And that's exactly what he did. He put the muscle on this fish. He worked it back and forth about 45 min. He finally got the fish closer to the beach. The whole trick is to time the fish with the incoming wave and try to pull him on the beach. We didn't have any Boga Grip or gaff or net, not that a net would help, this fish was too big. Once you hook a fish this big it's not near over until you get him on the beach. So, I went out toward the fish and I was able to grab him under the gills and help Scott land it. What a monster, the biggest fish I've ever seen landed on the beach with light tackle. What a fight! What a catch! This rooster fish was close to 45 or 50 lbs.

After that trip I couldn't wait to go back and I wanted to stay longer. My wife and I only imagined having an endless summer. This past winter everything worked out to where we were able to do just that. We went back and stayed for January, February and 40 | March. The weather was beautiful everyday. We found the perfect accommodations on the beach, on the northwest Pacific coast. We could walk right out the door to the fishing.

The beach and ocean were beautiful, to say the least. I would see the sardines by the thousands then, whack, something from below would hit them. They would shower out and the birds would be on them. Diving down like crazy. The snook would follow the sardines up on the beach shelf with the high tide. I could tell when they were there, I could smell the sardines. It was a feeding frenzy. You couldn't help but be excited even before you had a fish on.

The best run I had was a three week period where I caught fifteen snook , most were in the fifteen pound range with a couple even bigger. I also caught various other species but, snook were my main target. I fished with my same light tackle that I use for trout in the Laguna Madre. I maxed out the equipment. The most productive lures were the MirrOlure in the mullet pattern and red and white feather jigs. Snook caught from the surf are incredibly powerful and the most exciting.

The only thing I didn't catch was a tarpon. The danged elusive Tarpon. I have hooked them before but, they've always gotten off. Oh well maybe next trip.

I'm happy to be back here fishing in my old boat, in the old spots with my old clients. It has been very good fishing in Baffin Bay. The crowds haven't been a factor and there's good action fishing, much like the old days.

A most unusual thing happened in the middle of August. I'm out with some good client/friends, we're fishing near Baffin Bay. It was calm and hot, 100 degrees easy. I was working the trolling motor down the shore. We were casting the MirrOdine XL lure in the mullet pattern. We all had caught some big trout and redfish, the day was going good.

I made a cast near the shoreline off the bow and as soon as the lure hit the water it just exploded. I dropped my rod tip and paused for a second. Then, set the hook hard. The fish jumped completely out of the water and did a back flip toward us. Immediately, I could see it was a tarpon. In the back of my mind I'm thinking, it's going to get off. Then, it jumped again and I gunned the trolling motor toward it and bowed my rod down as it leaped so as not to get any resistance. I did this several times. My clients were trying to take pics as it jumped. I think they enjoyed the fight as much as I did. I got it to the boat and snapped on the Boga Grip. Yes! Finally I had caught a tarpon. It was thirty-five inches long and weighed about fifteen pounds. They took pics and I revived and released it. Thanks to my friends I've got great pictures.

It just goes to show, sometimes you don't have to travel, it's all right here in your own back yard. I'm looking forward to doing some big trout fishing in Baffin Bay and making a few precision strikes to Costa Rica. I called myself retired there for a while but the fishing bug just won't let go. I guess you could say I'm semi-retired now, still taking a few of my old clients and some of my friends fishing on the Laguna Madre and Baffin Bay when Carol and I are not in Costa Rica surfing and fishing.