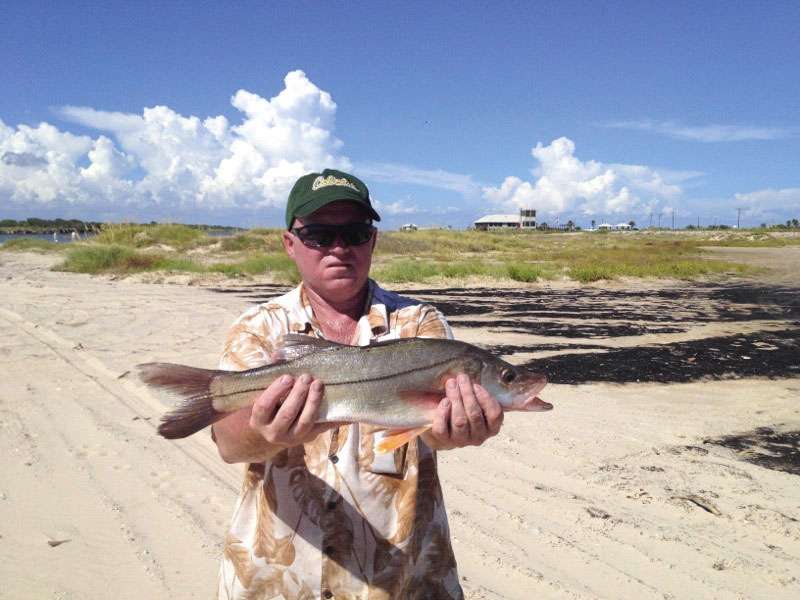 The surf sucked. Huge rafts of sargassum, seemingly thick enough to walk on, drifted with the current and each cast resulted in pulling the equivalent of a round bale from the Gulf. My wife and I were disappointed and frustrated to say the least. We had just driven nine hours with the anticipation of speckled sides and bronze backs, only to catch algae.

In an effort to salvage the day, I suggested that we give the jetties a shot and within minutes my truck was following the ruts to the mouth of the Colorado River. Little did I realize that this decision would lead to one of the most unique fishing experiences of my life.

Calm, green, sargassum-free water met us at the pocket formed between the old jetty and the new one on the east side of the river mouth. The first cast resulted in a thick 28 inch red stripping line from my reel while my wife, Jean Anne, dealt with her first-ever speck, a fat 22 incher, then moments later, a 26 inch sow. (I'm afraid her nose rose higher into the air with every trout that she caught while I only caught "lowly" reds.)

After landing my third red in twenty minutes of fishing, I experienced one of those moments that sticks with you forever. The strike was powerful and so was the run. My mind's-eye saw a thirty-inch-plus bull red on the end of the line. But then violent headshaking was transferred through the stretched 12 pound mono, and my mind's eye smiled as the vision changed from one of a red to that of a gator trout.

But then the powerful fish came out of the water in the headshaking tail-dance of a largemouth bass with sudsy spray showering off its silver sides, marked with a very noticeable black lateral line. My mind screamed, "SNOOK" as my mouth simultaneously screamed, "SNOOK!" The only time in my life that I can remember being as excited was the first time I saw a naked woman. I had caught a friggin' snook!

But wait a minute. I wasn't in Florida. Heck, I wasn't even near Port Isabel. I was standing in the sands of Matagorda Beach a couple hundred miles north of the tropical haunts preferred by this species. So where did it come from? Was it an immigrant from the Lower Laguna Madre or is the long absence of this prized game fish finally over? These questions soon led to another adventure. One of self-education on this species, its history in Texas waters, and the status of snook in the Matagorda Bay System.

There are actually 3 species of snook found in Texas waters. The largest version, the common snook (Centropomus undecimalis) is the one Capt. Ernest Cisneros has become a pro at targeting as his photos and articles in this magazine can attest. The largest population of Texas-bred snook are found in South Bay and the Port Isabel area while lesser populations exist as far north as Corpus Christi. Rarely do you hear of one being caught further north; though it does happen on occasion. The common snook is probably the only one of the three to attain the Texas legal size of 24 inches.

The other two species, C. mexicanus or Mexican snook, and C. parallelus are both grouped under the name "fat snook." These are smaller but stocky-built specimens with the same attitude as their bigger cousins. According to the folks at the Perry R. Bass Marine Fisheries Research Center, these two species are more often found in our bay systems. Both of these can be identified by folding back the pelvic fins. If the fin touches the anus then it's a fat snook. I was not aware of this fact at the time of my catch but upon reflection and a close look at the photos, I am convinced that my snook was a "fatty."

Disappointed? Not one, dang bit.

Prior to the 1940's, snook were almost as common as speckled trout along the Texas coast. In 1893, more than 20,000 pounds of snook were commercially caught in Galveston Bay while in 1928 over 230,000 pounds were landed from the waters around Port Isabel. But then the bottom fell out, and by 1961 no commercial landings were recorded. Overfishing, agricultural runoff, industrial waste, lack of freshwater inflow due to the damming of rivers, and a series of harsh winters all got blamed for the demise of the fishery. Yet, no one knows the exact cause of the collapse, though it was probably a combination of all of the above.

As for Matagorda Bay, researchers from Perry R. Bass state that an occasional snook finds its way into their gill nets during their surveys–the fat snook being sighted more often than the common snook.

While researching for this article, I found several forum threads discussing snook in both East and West Matagorda bays. One thread on www.fishwestend.com dated January 14th, 2010 displayed a photo of a snook found dead in Matagorda East Bay; while another on www.2coolfishing.com reported one caught in the Diversion Channel and three in the Matagorda surf during 2012. I also found on this same site reports of several being caught in Matagorda East Bay and other reports of snook killed by red tide in both the surf and bays. A TPWD report records an unspecified number of snook found amongst other fish killed by the freeze during the 1983-1984 winter.

Then you have the rumors of huge snook seen by divers around the Big Jetty at Port O'Connor and mid-bay gas well platforms, and of juveniles being caught in cast nets by bait fishermen in the Tres Palacios and Carancahua Rivers.

So is the resident population of snook in the Matagorda Bay System on the rise? Truthfully, I don't know and neither does TPWD. However, with the previous few winters having been mild and with the influx of mangrove snappers up to 3 pounds becoming common place, along with the huge rebound of tarpon off Port O'Connor, it is logical to assume that we may begin to hear of an increase of anglers landing more of these worthy gamefish. That is provided that the winters remain mild and the estuarine habitat and freshwater inflow required by the juvenile snook remains constant and protected. I'm curious to see what effect the LCRA's new water project at Bay City will have on the snook and other species as the amount of freshwater from the Colorado River will be decreasing.

Furthermore, the increase in the snook population will also be dependent on anglers that are lucky enough to catch a Matty snook. Any snook caught should be released to help insure the survival of a possibly rebounding population. With females producing over 1.25 million eggs per spawn and a large percentage of the male population morphing into females between 1 7 years of age, a strict conservation ethic will go a long way toward seeing the return of what the old timers called pike.

As for the 20 inch fat snook that slipped, tripped, and stumbled upon my line; it may not have been as gargantuan as the one Pam Johnson caught that graced the August 2013 cover of this magazine, but it, just as any snook caught in Texas waters should be, is a trophy that has turned me into a bona fide snook fanatic.

Some Snook Facts Old salts called the snook "pike" because the name "snook" is derived from the Dutch word "snoek" which means pike.

The Texas state record snook is 57 lbs. 4 oz. caught by Louis Rawalt in 1937 off Padre Island.

Female snook can live about 21 years and can grow upwards of 48 inches. Slower to mature than males, they don't begin to produce eggs until around 5 years old, which puts them in the 30 inch range.