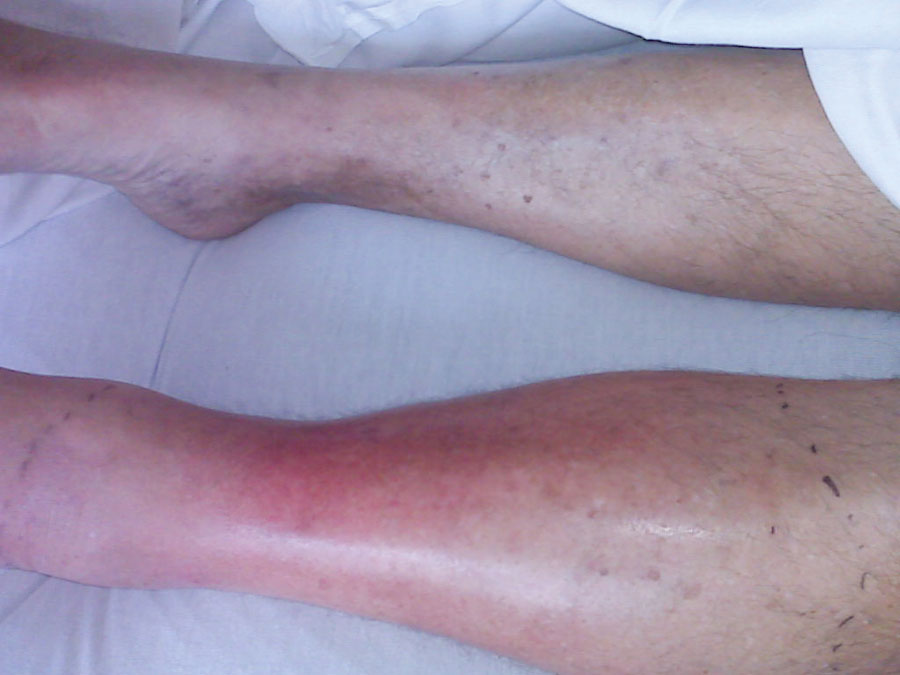 Procrastination only makes matters worse; note redness and swelling of my left calf when I checked into the Pearland Clinic.
Sunday afternoon, June 6, the surf was brown at Surfside Beach. I paddled my kayak out beyond the breakers to try some artificials. Probably my first mistake was not wearing protective clothing. The edges of the foot rests of my kayak are rough. The bare skin just above my ankle rubbed on this rough plastic. Soon the epidermis, the outer layer of the skin, on the inside of my calf was abraded and saltwater was being rubbed into this exposed raw area. The area had become painful by the time I quit kayaking.

My next mistake was critical. I did not immediately and thoroughly wash and disinfect the raw, rubbed area. After putting the kayak and other stuff away, I rinsed off under the outside shower and headed home. I keep a bottle of hydrogen peroxide at the beach house to disinfect such exposures but I did not use it.

Monday morning I awoke early with a painful swollen ankle. The abraded area was hot and red. My mistake, actually blunder, number three was rubbing some triple antibiotic salve on the sore area and going off to have lunch with my son. When I got home I was not feeling well and took a nap. I awoke to increasing pain and chills.

Mistake number four was waiting; procrastination. I had a very good idea that I could have the dreaded necrotizing fasciitis, "flesh eating bacteria." Several years ago my son's father in law had been infected with it and very nearly lost his leg. Much of the calf muscle of his right leg had to be surgically removed to contain the infection. Several follow-up surgeries were required to close the wound. Why did I wait?

By six o'clock I knew I was in trouble. The swelling and the pain were increasing. I did not dare wait overnight. I went to the Pearland Texas Emergency Care Clinic and explained to the doctor, Dr. Patel, that I had probably caught the Gulf of Mexico seawater bug and I might need a shot of streptomycin. Dr. Patel immediately diagnosed the infection. With a felt tip marker he delineated the extent of the red inflammation of the infection. The lower mark was at the ankle. The upper was just below my knee. He started an intravenous (IV) antibiotic immediately. As soon as it ran through, he started another. Doctor Patel stated, in a no-nonsense way, "You are going to the hospital." At that point I realized that this was not the time for argument.

A bed became available at Southeast Memorial Herman Hospital just as the second intravenous dose of antibiotic was completed. Dr. Patel insisted that I not drive myself to the hospital and called the Pearland EMS ambulance to transport me. The EMS technician who rode in the back with me was also a kayak paddler and we swapped kayak stories enroute to the hospital.

Doctor Patel had sent treatment instructions to the hospital. No sooner than I was in the hospital bed than the nurse started another IV dose of antibiotic, followed by two more before daylight. That made five doses of heavy-duty intravenous antibiotic the first night. Throughout the night the staff came by to check my blood pressure, pulse and temperature. I realized that the medical staff was taking this infection just a whole lot more seriously than I had, and that I was really in serious trouble.

When the hospital doctor, Dr. Eisenberg, came by in the morning, I was on my sixth dose of IV antibiotic. He said they were analyzing my blood work and shrugged off any question about when I might be discharged. He said to plan on at least one more day, maybe two. Over the next forty eight hours, I had seven more IV doses of the heavy-duty antibiotic.

I asked the nurse if they saw very much of this type of infection. She replied that yes, there were several cases of it each summer. In fact, just two weeks earlier, the man who had been in the room next to the one I was in had his leg amputated.

Thursday morning, after thirteen doses of intravenous antibiotics and several bags of saline solution, the nurse said, "Good news, your white blood count is back to normal." Then they gave me two more doses of IV antibiotic for additional insurance. A little later Dr. Eisenberg came by and discharged me with a prescription for yet more antibiotic.

Now, two weeks after being discharged, most of the swelling is gone, though the stiffness continues. The skin is discolored and has the appearance and flexibility of eel skin leather. But when I look down and count my feet, I come up with two.

I had been very foolish. Several talented medical professionals had worked three nights and two and a half days to apply fifteen doses of intravenous antibiotic to save my leg. Had I waited another night I would probably have been taken directly to the Intensive Care Unit and very possibly would have required surgery.

My subsequent research of necrotizing fasciitis bacterial infections reveals that, left untreated, these infections are nearly always fatal. Even with antibiotic treatment, aggressive surgical debridement (removal of infected tissue), is often necessary to keep the infection from spreading and amputation is necessary in one fourth of the cases.

These necrotizing fasciitis bacteria occur naturally and are present throughout all saltwater bays and estuaries. Every year several people die of this infection. Many more are hospitalized and some lose legs, arms, hands or fingers. Usually a healthy person's immune system will control the small infections from minor scrapes, cuts, hook pricks, shrimp tail stabs or crab bites. My infection probably spread faster than most because of the very large infected area and also because the bacteria laden seawater had been rubbed into this several square inch area of raw dermal tissue. My immune system was not able to combat that large an area of infection.

Obviously most people are exposed to the saltwater environment with little concern about this infection. Their immune systems protect them and they can go fishing and use the beaches without undue concern. Those people with open wounds or cuts and those with compromised immune systems, such as advanced diabetes, should take great care when they are exposed to seawater.

You can defend yourself against these bacteria by washing and disinfecting each cut or scrape. However, if after being exposed to seawater, such a cut or scrape becomes hot, red and painful, delay can be disastrous. If you notice a small inflammation, use a felt tip pen to mark around it. If it becomes more painful and the redness of the infection expands past the mark, get to a hospital immediately.

I was fortunate. Although I waited much longer than good judgment would dictate, I did not have disastrous consequences. I still have two legs and will go wade fishing again soon. However, since I do not dare risk re-exposure, I will be using my waders and carrying hydrogen peroxide in my tackle box to disinfect any cuts and abrasions.