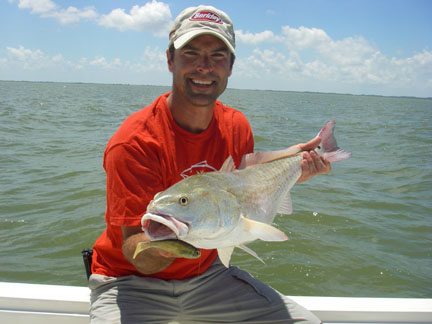 There was a time I thought I was a redfish-catching fool. As time goes on, I realize I was half right.

I have always loved redfish and caught tons of them: wading, drifting, and kayaking. Given that nearly all my experience had been gained between Port O'Connor and Aransas Pass, the shallow water approach just always seemed very natural. In fact, being able to see the fish I would catch had long been the cornerstone of my redfish strategies. Then I made a trip to Kemah.

Teaming with Mickey Eastman to fish the Kemah leg of the 2007 Texas Redfish Series, although not the original plan, turned out to be an eye-opener. Pam and I had signed on for the full tour, but the landscape changed, this time a family event (on her side.) Hoping to make at least a decent showing for Team of the Year, it was decided I should find a partner for Kemah and she would apologize to the family for my absence. Mickey was happy to oblige.

Saying this was an eye-opener is an understatement. To set the stage, I had never wet a line in any of the Galveston bays. The Trinity River was on an incredible rise, yet Mickey insisted we could win it in Trinity Bay.

Mickey took me to backwaters where I swore I could hear strains of banjo music, not to mention that I'd never caught a redfish amid log jams and lily pads. (So much for sight-fishing.) My confidence was waning as the hours ticked away. If Mickey felt the same it never showed. You'd have thought we were having a great day.

Finally, with little more than an hour remaining, Mickey says; "I've got one more spotHold On!" For the umpteenth time Mickey crammed the throttle in the corner and we somehow danced safely between partially submerged junk piles and various floating debris. If you make a Google search of "navigatin' son-of-a-gun," I'm sure he's listed.

Several miles into the middle of the bay Mickey jerked the throttle back and jumped on the trolling motor, prompting me to ask where we were and why. "Mary's Reef," he called over his shoulder as he gunned toward a platter-sized slick. "It doesn't really have a name. I named it after my mother; she always loved fishing here. See that slick? We gotta get upwind and drift in. You're gonna need a heavy jighead and one of these Gulp! shrimp."

I couldn't decide whether to risk catching the jig he tossed or step out of the way it was that big. "What the heck," I thought tying it on, "When on Trinity"

"This reef's about ten feet. Let it go down and just barely tickle the shell," he instructed as he reared back. Mick was hooked up and I stuck my first solid red of the day before he got it to the boat. "Just what we need," he allowed as he wrestled the fish aboard.

It was football fat and I feared it was too long yet the Check-It Stick said a tad less than twenty-eight and the digital scale said almost nine pounds. Mick was right again. We boated three more in short order, placing another just like it in the live well, and then roared away to see what the weighmaster would think of our sack. A nail-biter for sure. And yes, thanks to Mickey, we won.

Now it's 2010, and I'm discussing Berkley swimbaits with Hunter Cole of Pure Fishing Brands. Hunter suggests I should join Pure Fishing pro-staffers and noted tournament anglers, Kris and Jon Culpepper, to see the techniques they have perfected for catching redfish on swimbaits. Emails are exchanged and I'm invited to fish Trinity Bay. Easy trip for me as they would have everything on the boat.

The day was perfect, except for 20-25mph south wind forecast for midday that was promising to live up to prediction as we launched. The ride across Trinity was rough and I white-knuckled the grab rail as Kris laid out the plan.

"We're looking for mud boils and slicks, maybe a few birds," he explained, steering a course for the middle of the bay. "We got on 'em out here last week. Not sure about this wind, though." The wind did indeed became a factor as mud boils created by bottom feeding fish are always easier to spot against a green sea. Lucky for us, the water clarity held just clean enough to make spotting the boils possible for a few hours.

I really have to give these Trinity Bay guys credit. They are keyed into locating fish by means that are pretty much unheard of and largely un-subscribed to in many areas and have developed lure presentations for catching them. In the case with Mickey, we targeted a reef, albeit a last ditch. However, I must say I would have never headed to a deep mid-bay reef to catch summertime reds. That is school-trout strategy where I come from.

Riding the troll motor to gain upwind position of the first mud boil we found, Kris punched a waypoint and handed me a rig that consisted of Fenwick 7' 6" medium-heavy casting rod, Abu Garcia Revo Inshore reel with 50lb Spiderwire Ultracast braid and a Berkley Ripple Shad swimbait on a 3/8 ounce head. Apart from the reel, the outfit felt quite foreign. "Hmmm," I thought. But, then again, we were on Trinity Bay, so I did what I was told.

Jon joined in to explain that the best technique would likely be to jig the swimbait slowly along bottom. "They're rooting mud to scare up whatever they're eating, that's what makes the boils. The tails on these swimbaits make a lot of vibration and gets their attention."

The catching was slow at first, a few light taps and "heavy line" bites that we missed, one decent red that stuck, and several gafftop that I presumed were making the few small slicks. Those gafftop would have been all I needed to look elsewhere; had I been in charge.

Soon though, as more boils and slicks were spotted and visited with the trolling motor, a squiggly treasure map was being drawn on the GPS screen. Remaining within the confines of the scrolled tracks brought more action. All we needed was for the fish to feed with greater purpose.

I mentioned that the tackle seemed foreign as I was not accustomed to the weight. You must remember that a 6'-6" medium-light rod and a 1/4 ounce weedless Johnson spoon is about as heavy as I normally rig in the shallows. But we were on Trinity, slow-rolling for redfish in deep water, and that requires a different class of tackle.

It was a race against time. Water clarity was diminishing as the wind increased and the tell-tale boils were becoming less noticeable. Jon decided it was time to switch baits and plunked down a package of Power Mullet that looked almost big enough to fillet.

"We learned to use these baits during a Louisiana tournament when the reds were holding deep in dirty water. Nothing else worked but they ate these," he informed. "We've been using it ever since. Here, try this gold one."

The heft of the bait in my palm better explained the rod selection. It takes a lot of stick to launch a bait that weighs 1.75 ounces! And the weight, it turns out, is the key to the bottom-roll presentation.

It took a few casts to chunk it without getting a backlash. I eventually found the handle and began mimicking Jon's retrieve. Catching the aroma of a new slick, Kris jockeyed us back upwind and Jon hit pay dirt on his next cast. A solid eight pound red. Then Kris hooked up, and I followed to make it a triple.

Jon was beaming. "I told you redfish like this bait," he giggled. We managed to stick a few more reds including a twelve-pound whopper and a couple respectable trout before the conditions went completely to pot. The biggest trout might have pushed seven pounds had the net been ready sooner, but that's fishing. I was being schooled.

Despite the wind that shortened our day, I called it very enjoyable and gained another great lesson that I will apply soon in my home waters. One never knows. I may have been driving by lots of mid-bay opportunity all these years. That's what makes it fun.