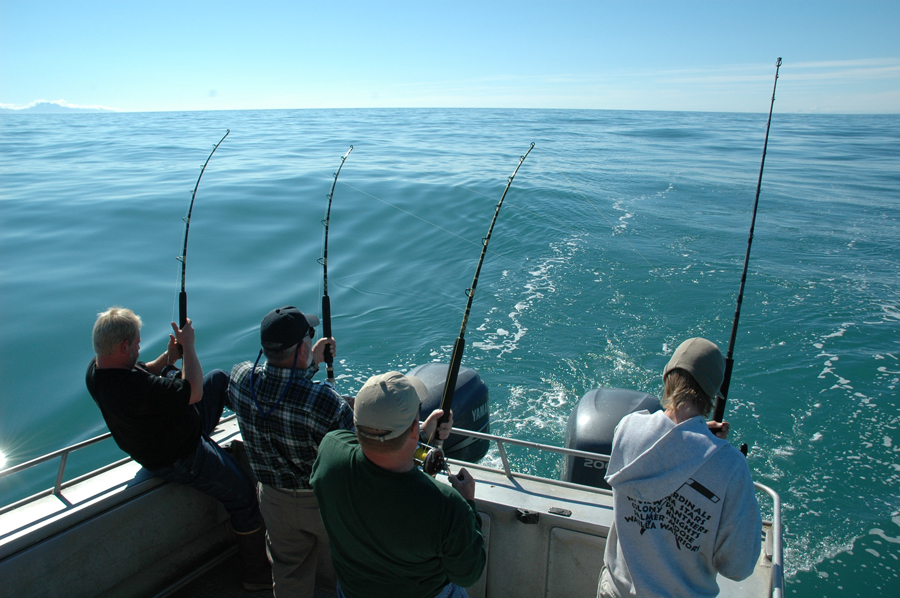 Tripled up on chicken halibut.

Maybe it was reading Jack London's Call of the Wild as a boy or maybe from staring at all those images in hunting and fishing magazines, but for as long as I can remember the mere mention of Alaska has always made the hair stand on the back of my neck. They call it the Great Land and the name fits in every respect; from the mighty rivers, to the majestic peaks, back down to the ocean, it's like no place I've ever seen.

The planning for this latest adventure began at the Houston Boat Show in January 2005. We were set up next to Rod and Randy Berg's Rod-n-Real Alaskan Fishing Charters, and for ten straight days we were taunted by a stack of photo albums and videos. We'd made a quick four day visit to Alaska's Kenai Peninsula in 2000, but the stuff on their table said we needed to go back. Save for the small matter of a half-dozen tropical storms and three hurricanes last summer, we'd have gone then. This year was different though, and we flew out of Houston's Bush Intercontinental Airport on a direct Continental flight to Anchorage on August 27.

The flight was like the night before Christmas. Pam dumped a pile of Alaskan fishing magazines in my carry-on bag and for nearly six hours all I did was thumb pages and stare at pictures, way too keyed up to read. Finally we touched down to a perfect sunny afternoon (rare there), jumped in the rent car and sped south toward Seward, Soldotna and Homer.

Being a clear day, we saw tons of stuff we'd missed on our first trip. And being a Sunday meant all the residents were trailering their boats back north to Anchorage so they could go to work on Monday. Everybody fishes in Alaska, or at least that's what the bumper-to-bumper northbound traffic had me believing as we hurried toward Soldotna.

Checking in was easy, Rod had us all set up in one of their eight cabins, right on the bank of the Kenai River. I was making my third trip hauling gear when our neighbor came running up with an eight pound silver he'd just landed from the dock. Pam was running around in the woods behind the house trying to get a good picture of a cow moose. Why do I always get the fun jobs?

Heading back for the last load, I bumped into the camp host. The Berg's have the place set up with a 24/7 on-site team who assist with everything from fishing tackle, boots and rain gear to local directions, where to shop and eat, and of course shooing moose out of the yard. I was handed two neatly-typed pages of itinerary for our seven day stay and hurriedly informed that if I needed anything else the hosts would be down at the dock the neighbor's wife had just hooked another big silver.

The itinerary declared our first day's fishing adventure would be a halibut trip on Cook Inlet. Rod and Randy have an office at Ninilchik about 40-miles from Soldotna to handle their halibut charter business. There we met Dave, our boat captain, who signed us in, checked our licenses and placed all our gear in the boat. Trailering to Deep Creek where we would launch took only a couple minutes and we were soon next in line to go.

Now the folks at Deep Creek have a very unique way of launching boats. It begins by unhooking your trailer from the truck and taking a seat in the boat. Next, a behemoth of a John Deere roars up in a cloud of diesel and shoves the whole rig into the ocean. The boat floats off and the tractor drags the trailer up the beach and parks it. Different; but then how else could you do it on a shoreline covered with volleyball-size rocks where the tide can change 25 feet in the span of a few hours?

Being nuts about flounder, Pam and I were dying to get into the halibut. A thirty minute run to the south had us anchored and lowering baits in hopes for 100-pounders. The currents though were running at a wicked 7.5 knots and even 5-pound weights were hardly enough to get the baits down where the really big fish lurk. After nearly two hours of dogged effort Captain Dave opted to abandon the mission and moved us to a place where "we'd get lots of chickens" as they call the smaller halibut.

Let me tell you, 2-pound weights in 80-foot depths are a walk in the park compared to 5-pounders in 300-feet. And even if we wouldn't get a shot at a barn door the chickens were plentiful and made for great sport. We marveled as fish after fish in the 15 to 20-pound class kept our rods doubled-over three and four at a time. For a couple of South Texas flounder freaks this was a fun game; and the halibut fillets alone are worth the trip.

The boat ride back was spectacular with plumes of several active volcanoes plainly visible in the clear afternoon sky. Sea otters, puffins and a host of rare shorebirds just added icing to the experience. The folks from Deep Creek Custom Packing who handle all the fish processing, freezing, and shipping chores for Rod-n-Real customers met us back at the Ninilchik office. They take great care with the containers and name tags to insure that each angler receives the fish they checked in and the processing is performed exactly as ordered. Our fish arrived home via UPS, vacuum bagged, still frozen like a rock, and in perfect shape. All that's required when it's time to cook is thawing them out.

Day Two took us back north about 90-miles to the seaport of Seward. Resurrection Bay is one of Alaska's premier venues for salmon, ling cod, halibut and rock bass. Like the branch office at Ninilchik, Rod-n-Real maintains a full-time operation at Seward, running charters in season for all the available species. Our targets here would be silvers, rock bass and maybe a halibut or two if we were lucky. The tackle we would use was much lighter and the depths were less than 30-feet on average which made the fishing considerably easier than the heavy-tackle halibut game and not much different than our light tackle work at home.

Our captain was a true professional and looked the part of the rugged seafarer that he is. At only 29, you wouldn't guess he's packing 15 years of charter fishing experience, but Eric started as a deckhand when he was barely 14, so do the math. Friends call him 'Popeye' and one look confirms it, Eric's forearms resemble most folk's thighs. That's what a decade and a half of hardcore halibut fishing will do for a young man.

The ride to the fishing grounds was an hour filled pleasantly with local fact and lore and the scenery was breathtaking. Giant granite spires sprouted from the sea-green depths and rose into the sea mist. A colony of sea lions "Aarrpped" their protests as we idled close for photos and every crevice in the granite made a perch for one rare sea bird or another.

Reaching our first stop, Eric unrolled the rods and gave us a quick lesson in mooching; a vertical jigging technique wherein a banana shaped weight causes a lure or dead bait to spiral enticing as it falls through the water. We had to make several moves but Eric knows his trade. Drifting a small inlet about two miles offshore one of Alaska's many glaciers did the trick. We literally fought heavy-weight silvers until our arms ached.

Day Three found us airborne, winging over Cook Inlet toward Big River Lakes and more salmon than you could shake a graphite rod at, but that will have to wait for next month. Y'all come back now ya hear!