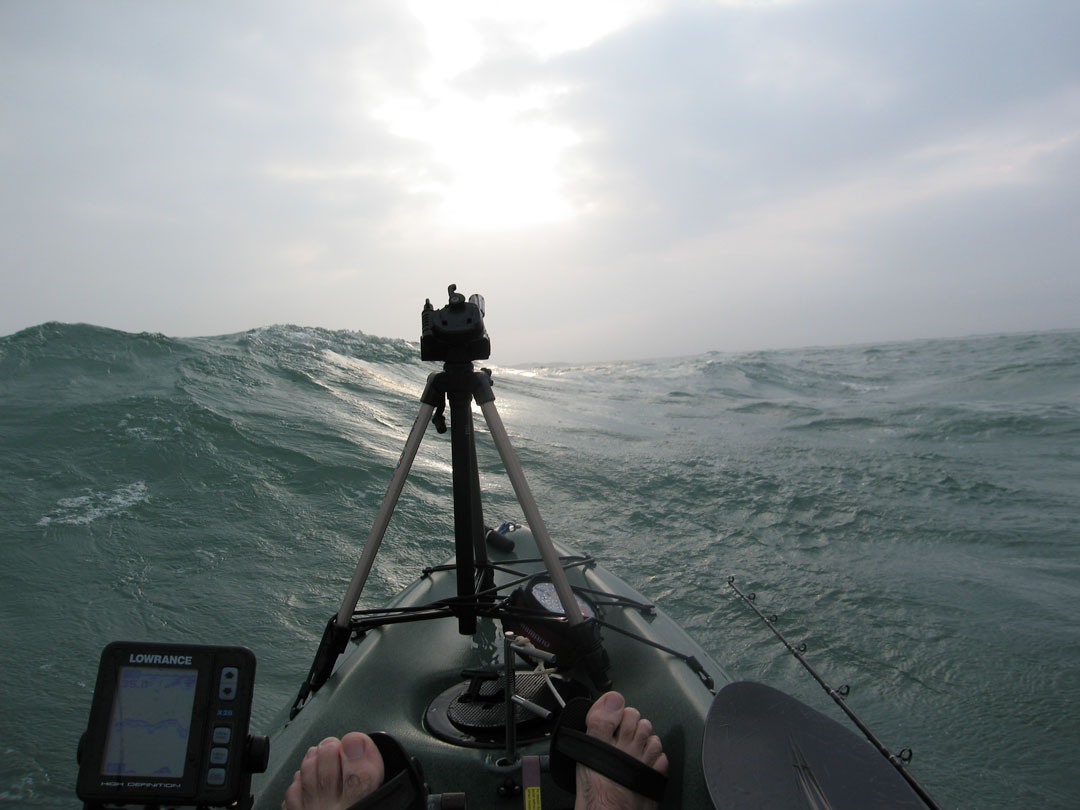 It was Friday morning about 10:00AM and I was heading down Padre Island National Seashore. I checked the forecast right before I lost all communication systems down the beach and the forecast was saying 2-4 foot waves with 10-15mph east wind until Sunday. A front was supposed to blow in on Sunday with NE winds at 30 knots would be expected. I thought to myself, "CoolI'll fish until Saturday night and get off the beach before the north wind blows."

So I head down the beach. Friday afternoon showed promise and with 3-4 foot swells as I paddled out to the oil rigs and standpipe east of the 4-wheel drive sign. Spent half the day out there and decided to come back in. My good buddy Yakmon was just heading offshore when I was heading in. The fishing was poor so I figured I would head down to the Mansfield jetties and get some rest.

Saturday morning was pretty much the same story with 3-4 foot swells and no fish. The Mansfield channel looked like the Nueces River and I couldn't even lose a live shrimp. About 12:00PM I decided to try some "special rocks" offshore further north. I bailed the jetties and reached my friends shark fishing in the 50s. I asked Oz, Kip, Bumpy and Curtis if they would watch my dog while I head offshore to some spots further north. I told them I'd be back by dark.

I head offshore about two miles in 3-4 foot seas and get out to my prime spots. I managed to catch a few fish and decided to drop a cut bait for a shark or larger snapper. So I set that rod in a rod holder behind me and continued jigging with lures. Right about 5:00PM the wind starts whipping from ENE at about 25 knots. The seas immediately built to 6-footers with a 7-footer every 7th or 8th wave. I decided that I'd had enough and it was time to go in.

Just as I say that, a medium to large shark picks up my cut bait and starts taking off. I had my jigging rod in my hand so I had to reel it in to grab the rod. Before I could get my jigging rod in, the shark had put some slack in the line and the heavy winds had twirled the main line around the tip of the rod. That shark was coming straight for the me and under the yak. Before I could get the rod out from the holder that rod worked like a lever and flipped me out. The line wrapped around the tip wouldn't allow the drag to slip.

Well, I have this habit of tying everything I own to the kayak with 1/4-inch rope. That shark was attached to my rod, which was attached to the rope, which was attached to my kayak. That shark was taking off with my boat turned upside down and I was stuck bobbing in the ocean two miles offshore. Immediately I started swimming for my kayak in the six foot seas. I was only able to see my boat when I was at the apex of the wave and when the boat was at the apex of another. I pretty much swam into the open ocean blindly after my boat for about 75% of the time.

After 20 minutes I was able to catch up to my boat because the shark had snapped the line, (most likely because of the tip wrap). However, I was physically exhausted. I have performed triathalons before and I keep physically fit by regular exercise and I was exhausted. If you have ever swam a decent distance wearing a life jacket you will understand. A life jacket is meant to keep your head back and I was trying to swim against that life jacket.

At this time, my boat is full of water from being overturned and sitting in the ocean. It must have weighed 400 pounds and it was everything I could do to try and turn that boat over. It was not happening, and I was thinking I am going to have to swim with my boat. Meanwhile the crest of each wave is barreling over the top of me and the boat from the heavy seas. Somehow, I managed to flip my boat over with the correct wave timing and all of my strength. I started to collect my thoughts and put my gear in the appropriate places.

About that time, a sea turtle comes up for a breath of air with a large "Heeeth Pooofff !!" I turned to see a black mysterious object in the water and literally leaped from the water and into my kayak. With my heart throbbing in my throat and my nerves rattled, that turtle takes off into the deep. Immediately I start to collect my thoughts and assess my situation. The water line is literally at my waist line. I thought, my kayak is sinking and I've got to get out of this boat.

I get back into the ocean and open the hatch to discover my boat is nearly full of water. I grab the only thing I had to bail with, a 12-oz Ozarka water bottle. Without thinking I dump the bottle into my hull and try to bail water. This was about as useless as tits on a boar. I quickly grabbed a knife and cut the bottle in half and start bailing water. I am switching between both hands because my shoulders were getting tired from reaching over the boat and bailing water. The hatch on my Hobie is only six inches in diameter so my knuckles were scraping the rigid plastic on each bail.

Knuckles bleeding and waves pounding, I somehow managed to bail at least half the water from my boat. I get back in and start to evaluate my location. I look at my GPS and find out that I have drifted six miles off course. The time is 7:45PM and I have fifteen minutes of daylight. I sat in the boat and thought wellthis should be fun. I grabbed my camera to take some memoir shots of the ocean to remind me one day of the tragic events that have taken place.

I start to head north towards my truck, into the NE wind. At 0.5 knots as an average speed, my GPS had estimated my time of arrival at 12:53AM. Hmmthis won't dojust get back to shore. I followed the wind and current to the beach as quickly as I could manage. All the while thinking you can make itjust stay calm.


It's now 8:50PM and in complete darkness I have to safely land my kayak and myself on the beach. All I could hear were the waves crumbling and I could feel each swell lifting me six feet up and down. I have done many surf re-entries before however none were in complete darkness. With my nerves locking up every muscle in my body I could see the light at the end of the tunnel.

With all of my senses in tune with the conditions at hand I followed the waves in without turtling in the surf. I pulled my boat onto the beach and immediately lay down on the sand with a sigh of relief. Whew!!! You made it!

Today..I write this story to provide all you kayakers out there with the information I have learned: