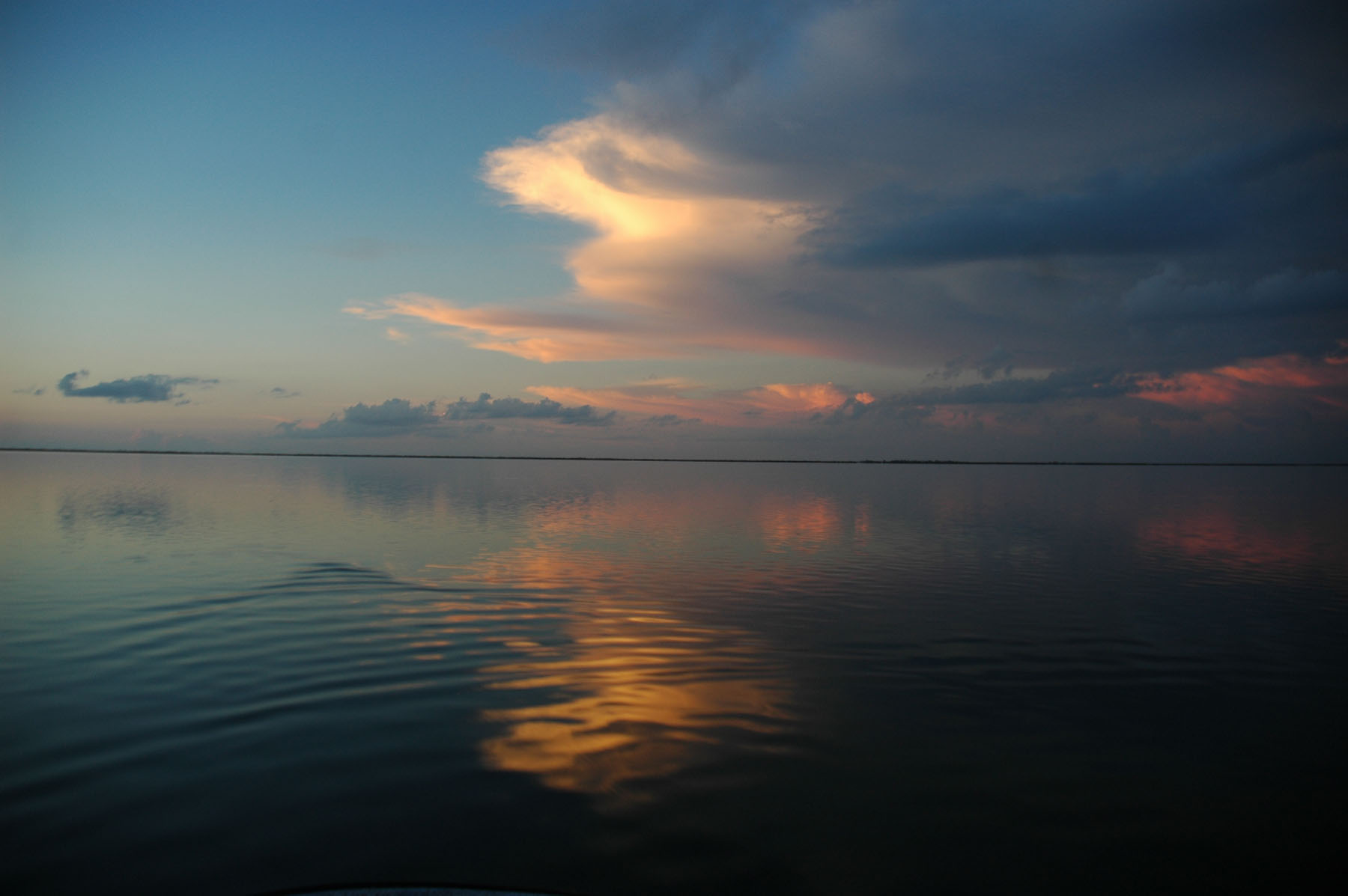 What a morning! Notice the wake made by a large redfish in the left of the photo.
Sunrise glistening on the water, wakes that telltale a fish's size and, most importantly, excited anglers on the Lower Laguna Madre are all pretty sweet. Let me begin by giving you a bit of background on the anglers. First would be our guide, Captain Ernest Cisneros, no stranger to TSF readers. Second is my husband, Jackson, avid angler. Third is my grandfather, Zavala, lifelong freshwater fisherman. And finally there's me, a novice angler.

This trip came about in celebration of my grandfather's seventy-third birthday. I got the idea back in June and discussed it with Jackson. We agreed it would be the greatest gift we could give him as he loves any kind of fishing. A call to Ernest had the date reserved we were set for Labor Day weekend in South Texas.

Jackson fishes every chance he gets and was excited to fish with Ernest. I do not fish as much as I should, being involved in the layout of the magazine and stuck in front of a computer all day I do not get on the water often. Jackson and I design the layout and website for Texas Saltwater Fishing; so you can imagine how excited Grandpa is to hear and learn about saltwater fishing from the magazine.

My grandfather has been fishing since he could hold a fishing pole, in rivers, creeks and freshwater lakes. Many of his childhood stories tell of fun times with his brothers fishing in the rio (river). I remember when I received the photos and story to design the layout for Mike McBride's Los Plasticos in December 2006. For you loyal readers who keep your magazines, go back and read the first five paragraphs. I'm sure Grandpa could have been the guy talking to Mike.

Grandpa is old-school. When it comes to tackle he is a push-button Zebco kinda guy. He refers to freshwater as, "sweet water." I still remember my grandmother's warnings not to get in the water and get wet when he took me fishing. I was to remain on the bank per her orders. He would always wade out from the bank and stay close by. But when he would see how sad I was not to be following behind him he would always carry me on his shoulders to a safe area so that I could fish near him.

Three years ago Jackson and I decided to move to the coast and leave the big bad city of Houston behind. Since then we have been introducing Grandpa to saltwater. Quite a different beast different rods and reels and lots of strange new gear, he has been learning it all. Notice in the photos he wears his ray guards, wading boots and wading belt even polarized sunglasses now! I never imagined I'd ever see the day he would look so cool with shades on.

Back to the story we met Ernest bright and early at a local restaurant and followed him to the dock. The night before we ran to Academy after arriving in Brownsville to ensure we had all the gear needed for our trip. Father's Day, Christmas and birthdays have been great times to give Grandpa fishing gear and tackle, but we still have a lot yet to get!

As we pulled up to the dock I know we were all nervous and excited to see how the day would unfold. Ernest has been fishing the Lower Laguna Madre since a young boy and he knows the bay system like the back of his hand. We couldn't be in better hands. Within minutes we were on the boat and off to our first destination.

Now here I must give thanks to Ernest's wife, Gracie, for entertaining my grandmother, Carmen, so that I could attend the fishing trip. How kind it was for her to show my grandma around so that I was able to hang out with the guys.

As we raced across the water Ernest pointed out wakes and baitfish to us. There were big fish out there ready for us to catch! The photos we print here monthly really do not do this bay justice, it is an amazing sight and you must experience it first hand. I encourage you. The potholes are green as green can be, where trout are surely laying. Ernest explained to us that Hurricane Dolly brought a layer of silt which now lines the bay floor. It was not there before her arrival. Our waters in the Port Lavaca area are very muddy in places bringing a familiarity to this wade for both Jackson and me. Jackson commented to Ernest about this and Ernest quickly noted this was not good as the silt had covered potholes where the fish enjoy lying.

Capt. Ernest began to get our rods rigged with topwaters and instructed us in the direction we were to wade. He also showed us how to work the Super Spooks Jrs. he had just placed on our lines. I remember reading from each and every TSFMag writer how lure presentation is the most important element when it comes to landing these fish, boy, did we discover that quickly! Ernest would later be catching and releasing them left and right.

Jackson headed out and Ernest got my grandpa and me ready to go also. We followed in line working the area. As we began to wade each of us started to get blow-ups as we cast with the wind, according to Ernest's instruction. The excitement I felt watching grandpa get blow-ups as Ernest coaxed him on how to react was like none other. He was truly having the time of his life. If you notice in the photos he began the morning wade with a rod more appropriate for using bait in the surf and his old-school push-button reel, that was all about to change

He continued to get blow-ups, but did not land any fish. For Christmas last year, we bought him a baitcaster in hope to get him into the proper gear. Reluctantly, he asked if we could exchange it for a traditional push-button reel which was what he felt most comfortable using. We gladly exchanged it, but explained to him if he wanted to catch bigger fish he must learn to use products made specifically for saltwater fishing. The ray guards and wading boots he had no problem wearing once he saw a stingray swim by the first time Jackson took him wading.

The morning wade produced fish. Jackson caught his first snook. While he was removing the hooks Ernest quickly waded over and explained some facts about snook. He is an expert in catching, releasing and educating people about these fish. Ernest offers only catch and release trips on all of his snook trips. He taught Jackson how to revive the fish, which was quite a unique experience. I caught a 24" redfish and Ernest landed an oversized red. We continued working the area and by 10:00am the bite was gone. We were still getting occasional blow-ups but the fish would not commit. Ernest picked us up on the boat and took us to another location to fish for trout.

Jackson and I live and fish in Port Lavaca. Those familiar with our waters know it is much different in clarity compared to the Lower Laguna Madre. The potholes Ernest taught us to cast toward are clearly visible in this bay. The water is gin clear enabling one to easily see grass, shrimp and anything moving in the water.

Ernest switched us from topwaters to soft plastics. Grandpa's arm was tired so he listened when Ernest suggested switching to something lighter. He had Grandpa hold the rod he had been using then handed him a spinning outfit; he agreed quickly to switch. His first casts were difficult and awkward, but Ernest waded alongside and patiently worked with him. As we began our mid-afternoon wade in trout green water Grandpa was casting further than me! Seeing him out there brought back so many memories of fishing in the Hill Country around Fredericksburg with him.

As we waded waist-deep getting bites on our plastics I realized how lucky I was to have him teach me about freshwater fishing when I was young. He had taught me how to catch bass so long ago Now here I was seeing him learn about saltwater fishing. Grandpa was now learning to catch trout, redfish and snook. I was very glad to have been able to join them. As we cast into potholes, we waded and talked about techniques, tactics and fishing that particular area, all the while catching small trout and rat reds.

As we headed toward the third honey hole Ernest informed me it was 12:30pm already. I had promised grandma I'd be back around 11:00am. How time had just flown by Back to the dock Capt. Ernest took me as I was to catch up with grandma and Gracie to spend some time beachcombing. Just ask Capt. Billy Sandifer, he knows I love looking for seashells.

I was sad to leave the guys, but excited as grandpa went on and on about fishing. I quickly took off my gear and headed back to meet up with the girls. As they approached their third fishing destination, Ernest asked him if he wanted to drift or wade, he exclaimed, "Wade, of course!" I later learned grandpa caught his first keeper trout that afternoon.

I am glad he was able to get advice from Ernest and ask him questions about saltwater fishing. I am sure they got into some lengthy conversations in Spanish about fishing in general. We sure did fish in sweet water that day.

On our way back to Port Lavaca, he eagerly asked questions about lures, lure colors, and the tackle Ernest used. Apparently he caught his trout when Ernest switched him from a pumpkin/chartreuse Brown Lure to a plum. How quickly he was learning!

When we would go to visit him we would always talk about fishing and Jackson and I would answer his questions to the best of our knowledge, opening the magazine and showing examples. How great is it for us to experience it with him now firsthand instead of just showing him photos.

As they backed down our driveway to head home, Grandpa turned to me with the biggest smile, "We have much to learn, Jasmine, much to learn."