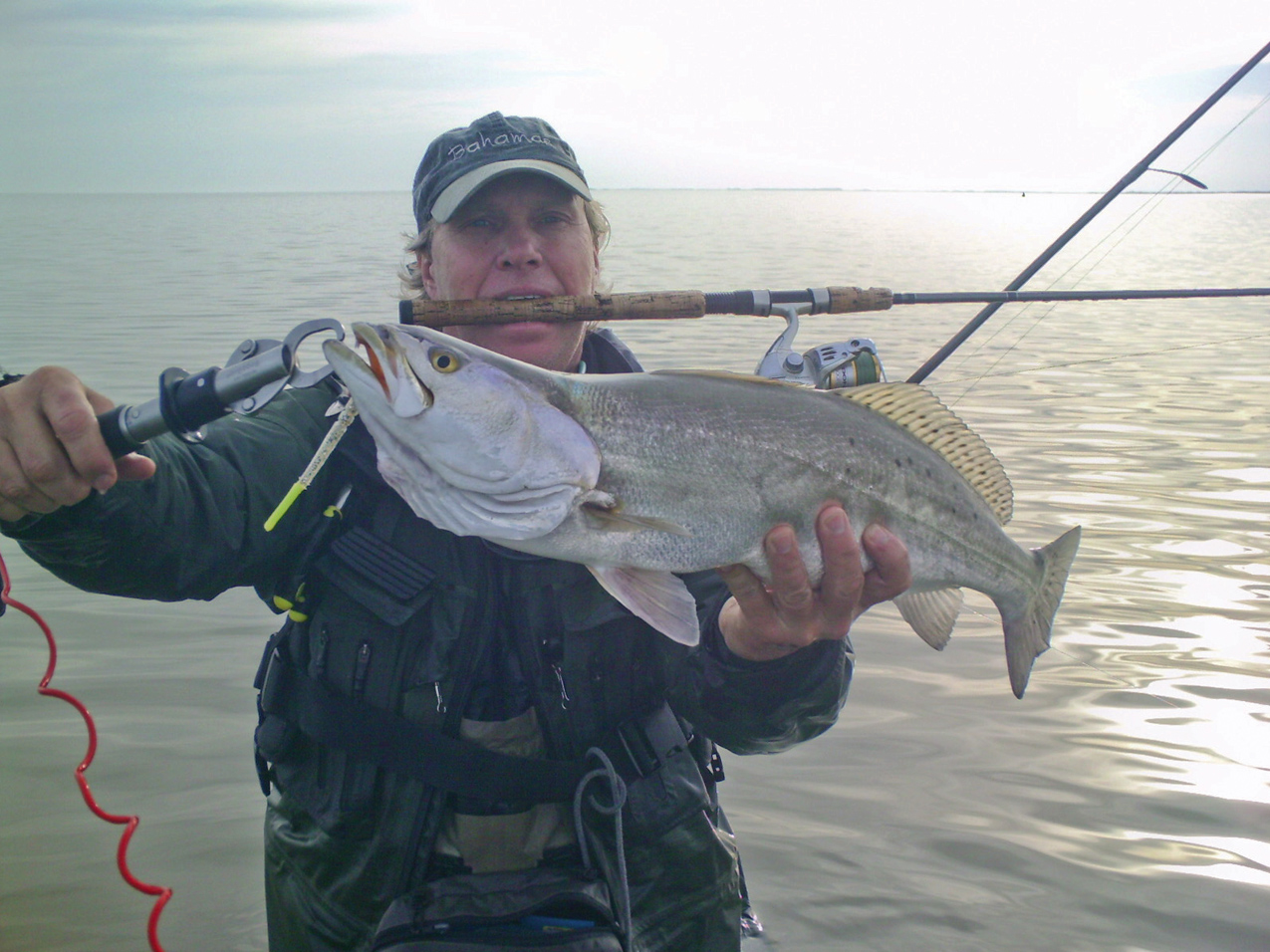 Author with a nice Baffin specimen on a cold day.
It was May 27, 2010, the day I witnessed a spectacle so incredible I felt I had to share it with the trout fishing world. The event confirmed much of what we know about the behavior of large speckled trout, and perhaps introduced a new twist into the way they feed. I believe anyone who has pursued this great gamefish will be fascinated by this read, so sit back and enjoy the ride.

I was fishing by myself that Thursday. When the weatherman predicted light southeast winds I knew my first stop of the day would be Tide Gauge Bar in Baffin Bay. For those of us lucky enough to regularly fish "the greatest trout bay on Earth" it is a well known fact that "the Bar" can be spectacular this time of year, especially for large trout. I had already logged four quality trips to Tide Gauge in 2010 and was most excited about the potential of a fifth.

Being on the front side of a full moon, I hit the bar early (just before sunrise), quickly catching three trout, all in the 21-23 inch range. Even though the fish completely shut down after the early bite I continued to grind until about 10:30. With the sun well above the horizon it was obvious that the Baffin water I was wading had unprecedented clarity, and sight-fishing for redfish could be in order. I made the short run to the north shoreline and proceeded to land four slot reds, all of which I sight-casted.

While catching the reds I began to realize how remarkable the sight-fishing conditions were this day with few clouds, no haze, very light winds and, most important of all, gin-clear water. Getting all of these variables to line up is asking a lot of the fishing gods, but on this magical day they did. So at about 1:30 I made the decision to go back to Tide Gauge and try my luck at sight-casting trout. This turned out to be my best fishing decision of 2010.

I came up behind the bar, waded in, and immediately started seeing fish. I don't mean I was seeing a few fish; I mean I was seeing incredible numbers of 20-30+ inch speckled trout. The fish were moving parallel to the bar in both directions. I could stand in one place and watch trout swim by me. I cannot stress enough that I was only able to view this spectacle because of the exceptional sight-fishing conditions.

The most amazing thing I witnessed was not the number of fish, but the size of the schools and their behavior. We all know speckled trout start out as school fish, and seem to become more solitary as they age. This is exactly what I observed. There were virtually no fish under 20 inches. The 20-24 inch fish would be in schools of five to eight; the 25-27 inch fish were generally in twos and threes; and the 28-30+ trout were always one or two. There were exceptions, but a pattern was obvious.

The behavior of these big trout was the primary reason I wrote this article. These trout were hunting, and they were doing it with a pre-determined strategy. The groups of four or more best exemplified it. They would swim single file, with a few staggered slightly out of formation. They would approach the back of a grassbed in a stealthy manner and then either in the middle of the grassbed, but most often at the end opposite their approach, the school would bust out of single file into a wall of trout. The lead fish did not change speed, while the tailing members of the group would accelerate rapidly to create literally a 3-D wall of fish. This was obviously a hunting strategy whereby no matter which direction their prey fled, it would be met by a hungry trout. Up, down, left, right, it did not matter, all baitfish were in big trouble. The trout would then re-form their single file formation and continue hunting.

The reason I think these groups of trout were single file is it made them one dimensional to the prey, and therefore much more difficult to see. A wall of moving trout would be far more visible to the prey and would potentially create more detectable vibrations to them. I can envision this cooperative hunting behavior being very effective in off-color water when trout are themselves using primarily vibrations created by escaping bait fish to track them down.

I find this hunting strategy fascinating because it seems these fish had to somehow be communicating to pull this off. Or, I suppose it is possible, trout are born with instincts to cooperate in such a manner. But I can tell any reader of this article that I witnessed this wolfpack strategy numerous times and it was not the least bit subtle. I was rewarded with hookups several times that day after launching my lure in front of a school as they burst out of formation.

One other noteworthy thing I saw that day occurred when I would make a second cast at a group of fish. If I made a cast at a group and got a strike but did not hook up I would quickly lob my lure back into that same group. In several instances I then hooked up, but every time it was not the fish that hit the lure the first time. If I had been blind-casting I would have assumed it was the same fish, and I would have been wrong. I believe these fish got into a competitive mode and when that lure hit the water a second time they were all after it. Two points here are the second cast at a fish that results in success is often a fish different from the one that hit the lure the first time and, as we all know, once a school of fish is "turned on" they can be caught on numerous successive casts.

In my journal I wrote that I saw at least 150 trout that day. I believe it was more likely 200 or more. I could see so well that groups 40 yards away could be identified, though they were often just moving shadows of trout of undeterminable size. I saw two really large fish on this wade, both well over 30 inches. One in particular stands out in my mind. I was landing a 23 inch trout and this big mama swims within four feet of me. I felt like this fish was easily 32, and I bet over 10 pounds. It looked like it could eat the one I was releasing (just a slight exaggeration). At the end of the wade, which lasted about two hours, I had caught and released six trout between 21 and 27 inches. I had several other hookups and numerous rejections as the visibility was so good my white soft plastic probably looked like a white soft plastic instead of a baitfish to most of them.

So I know readers are thinking, "right Mike, you can determine trout lengths and weights just by observation." And I admit it is just a guess. But just a little background on me might give my judgment a little credibility. I live on the water and fish the upper Laguna Madre and Baffin Bay about 80 days a year. My sight-fishing skills come from some twenty years of doing it often in the clear waters around Port Mansfield. Redfish have always been my primary target, but along the way I have caught numerous 25+ trout. Sight-casting is my passion and I believe I have had enough experience to lay a fairly accurate guess on these trout.

After this great day of fishing and an off-the-chart world-class day of observing, I could not wait for another crack at sight-casting trout on Tide Gauge Bar. My opportunity came on Tuesday June 1st when again I was fishing by myself (seems nobody likes hanging with me). On this day I caught fourteen trout on the bar between 19 and 28 inches. Eight of these, including the 28, were caught by sight-cast. I only saw about twenty trout that day as visibility was not as good as it was on May 27, though I felt certain there were fish present I could not see. I observed none of the single-file stalking I had observed five days before. The fish were biting much better on June 1 because the water was slightly off-color.

So what can a trout angler take from the May 27 experience I had? What I do with this information is keep it in mind when I am blind-casting for trout, which is 99% of the time. We all know they like to hang out near structure, grassbed edges and color changes to ambush bait. This is how I have always envisioned trout feeding. But after my May 27 experience I believe those days we are catching lots of our yellow-mouth friends over a short period of time is when they are moving and hunting and competing, even though they are engaged in a cooperative strategy. They are probably often engaging in the hunting strategy I observed but I would be willing to bet they have other strategies as well. During that wade I contemplated, "How would the fishing be right now if the water was off-color and I was blind-casting?" The answer is I would have been hammering trout, no doubt, because with so many fish around, random casts would have yielded numerous strikes.

As I sit here typing this on May 2 of 2013, Baffin Bay is in a quagmire of brown tide. Days on Tide Gauge Bar this year have resulted in quality fish, but they are far fewer in number. My angling friends (yes I really have some) and I long for clear water in the greatest trout bay on Earth. Right now the idea of sight-casting on Tide Gauge Bar seems a joke. But I am confident that we are in a down cycle, and Mother Nature will shine on us in the future and bring clear water to our beautiful South Texas estuaries. I can assure you that when the waters do clear I will be stalking my favorite gamefish, hoping to lay out the perfect cast, landing that fat sow, and then releasing her with the satisfaction of knowing she will live to be sight-cast another day.