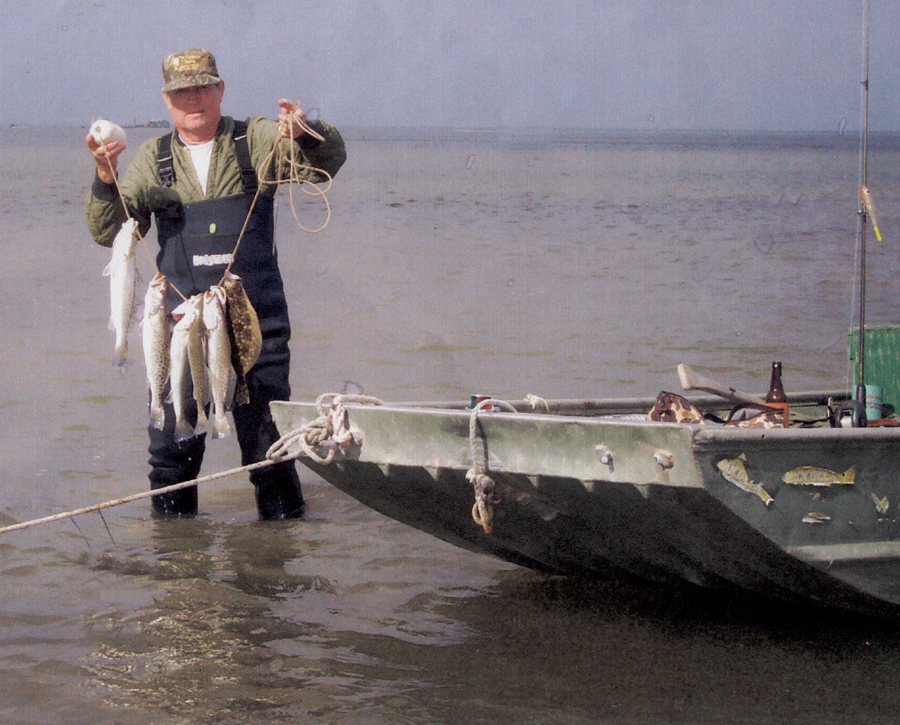 In January 2000, after nearly 70 years of practice, you might say Kutch had the fishing figured out in San Antonio Bay.

Raymond "Kutch" Albrecht was born June 28, 1925 in Victoria, Texas and has fished the Texas coast for almost 76 years. Kutch's parents loved to fish and they began taking him along on their trips to San Antonio Bay when he was six years old. Kutch has been an avid angler and hunter his whole life, the only time he didn't fish and hunt was during his service years with the U.S. Navy, but he went back to it as soon as the war was over. Kutch's fishing career spans a period when technology and manufacture of tackle, boats and motors changed at an amazing rate. In the beginning, things ran at a different pace and folks approached the sport much differently than we do today. Kutch was kind enough to sit down and tell us his story; we hope you enjoy it.

We lived in Victoria on Upper Mission Valley Road when I was a boy. My dad owned a '28 Chevrolet automobile and my mother, my father, my grandfather and I, we used to drive down from Victoria to fish San Antonio Bay. I was just a boy; six years old when they started bringing me. We'd always stay for several days at a time and we'd camp out over there at Hopper's Landing under the big oak trees in pup tents. You know, Bob Hopper's old place. Nowadays there probably aren't too many people will know where that's at, but it was popular back then. I guess you could say we was fishing out of Tivoli or maybe Austwell, and then folks might know where we're talking about, over there on the west side of San Antonio Bay.

We fished out of there from the time I was a kid until I went into the service in '43 and we didn't have no boat and motor at the time, it was all bank and wade fishing. We had ice boxes and we'd always bring enough block ice for the trip. We'd gut and gill our fish and chip that ice over them and we'd always keep as many as we could eat fresh and we always sold the rest. That's the way everybody did it back then, and we sold a many a box of fish for 25-cents a pound; it would pay for our next trip. Mom and Dad became good friends with Flora and Bob Hopper and then later on I got to know Carlton, their son. Carlton was my age and we'd fish together. I think he just passed away a couple years ago. Right before I went into the service Mother and Dad bought a 14-foot wooden boat and a five horse power Sea King motor. Let me tell you, it wasn't much by today's standards, but we could really get around that bay. We thought we had it made then.

Our tackle was all pole and line when I was a kid, my family didn't use reels. Dad would make up those old cane poles with braided line on them and like I said we mostly just fished from the bank or waded in. Then in '36 Dad bought a new Chevrolet and we could get around a little better. They had just finished the old causeway bridge across Lavaca Bay from Point Comfort to Port Lavaca. The causeway had two lanes, but there were almost no cars on it. Folks would drive out on the causeway and everybody would pull off into one lane and get their poles out and start fishing right there on those reefs under the bridge. When a car came it would slow down and stay in the open lane and go on by, everybody did it that way. I'll never forget one time on the bridge Mother caught a hardhead and threw it up there. My sister came over and I don't know what made her do it, but she lifted her foot and mashed it down on that catfish. That spine was sticking straight up and it went right through her foot. She was in misery, it was bad and I never will forget it. I don't think she ever stepped on any catfish after that.

Dad knew those reefs there under that old bridge as well as anybody. Those reefs didn't stick up then like they do now and it was tricky, you had to know where to fish and Dad knew all the good spots. We used homemade popping corks and shrimp on those cane poles and Mother could pop that cork better than anybody I ever saw, she could catch 'em coming and going. Those old corks looked just like the corks you see today except they was made out of real cork and you could really make a noise. The cork had a hole through and you ran your line through, you adjusted the depth of your bait by pushing a stick in the hole. It was a lot of work, standing there popping that cork all day. I seen a many a time Mother would outfish all the rest of us put together though, she was good at it.

Right before I went into the service back there in '43 and Dad bought that old wooden boat, we started getting around and learning that bay pretty good. It wasn't long until we started making overnight fishing trips and camping on what was called Carroll Islands down toward Rockport there in Mesquite Bay. There was a man named Carroll who helped start those bird sanctuaries and refuges down there and they put up a monument there on those islands to honor him and that's where we liked to camp. We'd use the boat to run to different areas and wade fish all over the place during the day and then we'd put out our trot lines at night. We filled a many a wash tub in those days fishing day and night the way we did.

Of course there were almost no boats on the bay back then. We'd go for days at a time without seeing another fisherman sometimes. That old boat was really something and not so seaworthy for a big bay like San Antonio, you really had to be careful, and if it quit running you had to know how to fix it yourself. We'd have to make several trips to get all our stuff down there to Carroll Island and then it would take even more to get our gear and all those fish back up to Hoppers. Mother always made us a big pot of beans or chili and that would last several days. She had a little Coleman stove and a double skillet that she used to make us fresh cornbread. It was primitive compared to today and sleeping three in a pup tent would get crowded, but that's how we did it and we always had a good time.

I remember when the war broke out, when the Japanese bombed Pearl Harbor. When WW-II started everything was changing fast. Not too many people had time to go fishing; everybody was working or enlisting and going into the service. My family made their living farming and I had a farm deferment when the war first started, farming was considered a protected occupation and farmers were exempt from the draft. The government was buying all the farm produce they could get to feed and clothe the men in the service. They wanted us to stay home and keep the farms running but I couldn't stand it and I went to enlist in the Navy. They shipped me off to San Diego for basic training and then I was assigned to the USS Lexington, the aircraft carrier they have on display down there in Corpus Christi. I served on the Lexington until I got out in 1946. We were in the Pacific the whole time and we saw a lot of action. I was assigned to a 20mm gun crew and my first job was a lookout and then they made me a loader. Later I became a gunner, still on the 20mm guns.

When I got home from the Navy I couldn't wait to get back into fishing. Mother and Dad still had that old wooden boat and their five-horse Sea King and I just had to get me one. I went in partners with a buddy and we put a good outfit together for 1946. It was either Roy Rogers or Gene Autrey, I can't remember which; one of them owned the Yellow Jacket boat company and they made the first molded plywood boats that came out after the war. We bought a new 12-horse motor and we could really get around. We'd run all the way to Pass Cavallo from Hopper's and fish the surf and all the bay in-between. Most times we'd just camp wherever we were when it got dark.