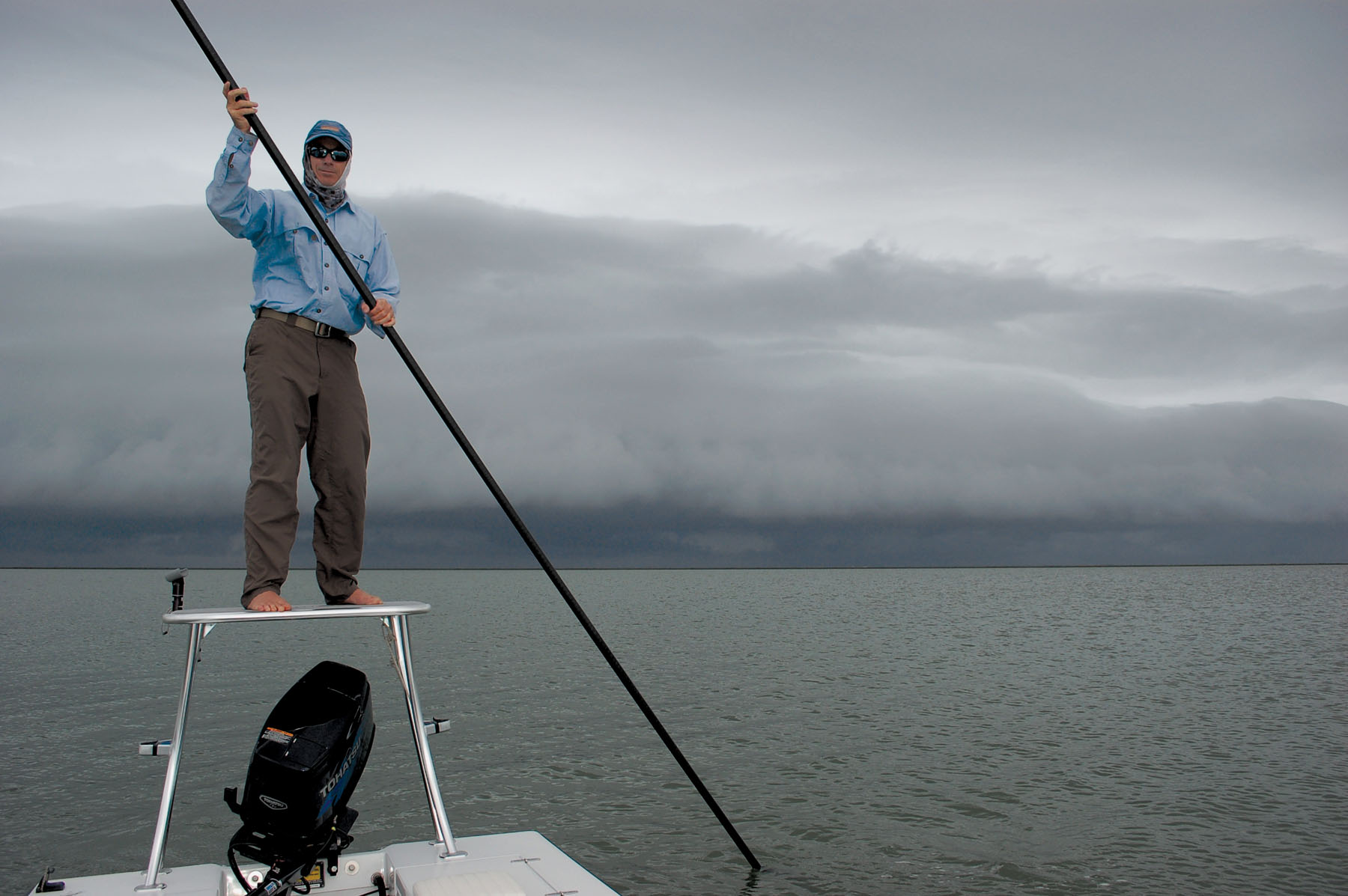 Recently while making the long drive from Port O'Connor my mind began to wander as it often does when there are many miles of road ahead. The day before, I had been fishing with a friend who is an experienced angler. We had spent the morning poling the flats searching for redfish while keeping a careful eye on the skies to our north. A powerful cold front was predicted to move in around noon, packing heavy rains and high winds. On cue late that morning the skies began to darken. We straightened the boat, strapped on our life jackets and headed for town with full intentions of beating the approaching system.

Several minutes into the trip a wall of cold wind traveling well ahead of the clouds blasted us. Funny thing was it actually felt good after a sultry morning on the water. But by the time we made it through Saluria Bayou and into Mitchell's Cut the wind had whipped up an ugly chop real ugly. The wall of wind that cooled us off moments earlier had now strengthened to a roaring blast and it was clearly something to be concerned about. We pounded our way through the waves stacking up in Mitchell's Cut and from there things just got rougher. After another 20 minutes of bashing, banging, and wave-eating we pulled into the ICW and the safety of the marina. To say I was happy to put my feet on dry land was an understatement. I was fortunate my fishing partner was an experienced operator who handled himself and his boat very well in the rough conditions. Things could have turned out much worse. The weather stations later reported sustained winds of 50 mph with gusts much higher. Having endured them, I believe it. It was a cold dose of Mother Nature right in the face.

I thought about that storm as I careened down the asphalt and was reminded yet again of how important preparation and caution are on the water. Gambling with the weather or overestimating the seaworthiness of your vessel and your ability to operate it is a dangerous game and can turn a routine trip on even a modest body of water into a nightmare.

Next to wearing a life jacket, we all are taught that one of the fundamentals of safety on the water is to pay attention to the weather. It's just plain common sense. Unlike years past, weather monitoring technology abounds and real-time radar and weather reports are now available every day at any time of the day. There is no excuse for hitting the water without knowing what conditions to expect throughout the course of an outing. At a bare minimum, anglers should keep their eyes on the sky and make conservative judgments when evaluating encroaching storms, strengthening winds, or significant changes in the weather.

I got a hard lesson in weather watching about twenty years ago on Choke Canyon reservoir. We had been camping and fishing for several days on a small island on the north side of the lake. The weather was hot and windy, just like it always is in the summer in South Texas. On the morning of our last day we noticed storm clouds forming to the south of the lake. Over several hours, the storm organized, intensified, and began to move in our direction. We decided it was time to get the heck out of Dodge. We fired up our rattling outboard motor and headed out across the open water toward the boat ramp two miles away. Halfway across the storm swooped down on us with a vengeance and we found ourselves in the middle of what looked like a Hollywood movie set, complete with lightening, hail, brutal wind and crushing waves. I'll never forget the sight of thick laminar columns of water coming over the bow and washing away our stuff as we tried to stay afloat in the middle of Choke. Through the grace of God, we reached the other side and made it to the boat ramp. We were battered and cold but in one piece and very, very, lucky to have lost only our gear. Never in a million years would I have guessed that lake could have gotten that rough, but it did. And it happened in a hurry. If we would have exercised better judgment, we would have been safe and sound long before the storm hit.

Another lesson I learned is what can happen when you play chicken with something as routine as the setting sun. We were fishing near the cattle pens in Port O'Connor on a beautiful fall evening a few years ago. The fish were biting so we stretched the trip out as long as we could. As the last sliver of sun dropped behind the horizon, we fired up the boat and headed for town, assuming we still had thirty minutes or so of visibility. Halfway across the open water run to the Little Jetties the motor stalled and we came to a sluggish stop. I tried repeatedly to fire up the motor but it was unresponsive. With fading skies overhead I reached down and flipped on the running lights. They didn't come on. I jiggled the wires, checked the fuses, and cleaned off the connections. Still no lights. So, I pulled a Q-Beam from under the front deck and managed to get it hooked up. To my horror, the bulb popped as soon as I flipped the switch on. Darkness engulfed us as we drifted with no power and no lights somewhere between the Little Jetties and Pass Cavallo. My mind raced and I tried not to think about the frightening possibility of being plowed by another boat or sucked through the pass.

After thirty minutes of fiddling unsuccessfully with the running lights I reached up and hit the boat's ignition switch, expecting no response. To my astonishment the motor fired up. To this day I still don't know why it stalled, or for that matter why it restarted. We managed to get our bearings straight and made a harrowing journey back to town in total darkness. I don't ever want to re-live that night.

Each of us has a responsibility to learn from our experiences and make better decisions on the water. We owe it to ourselves, our families, our friends, and other boaters. Please remember to watch the weather, check your equipment ahead of time, and know when it's time to go. These things add up to good common sense and could very well save your life.