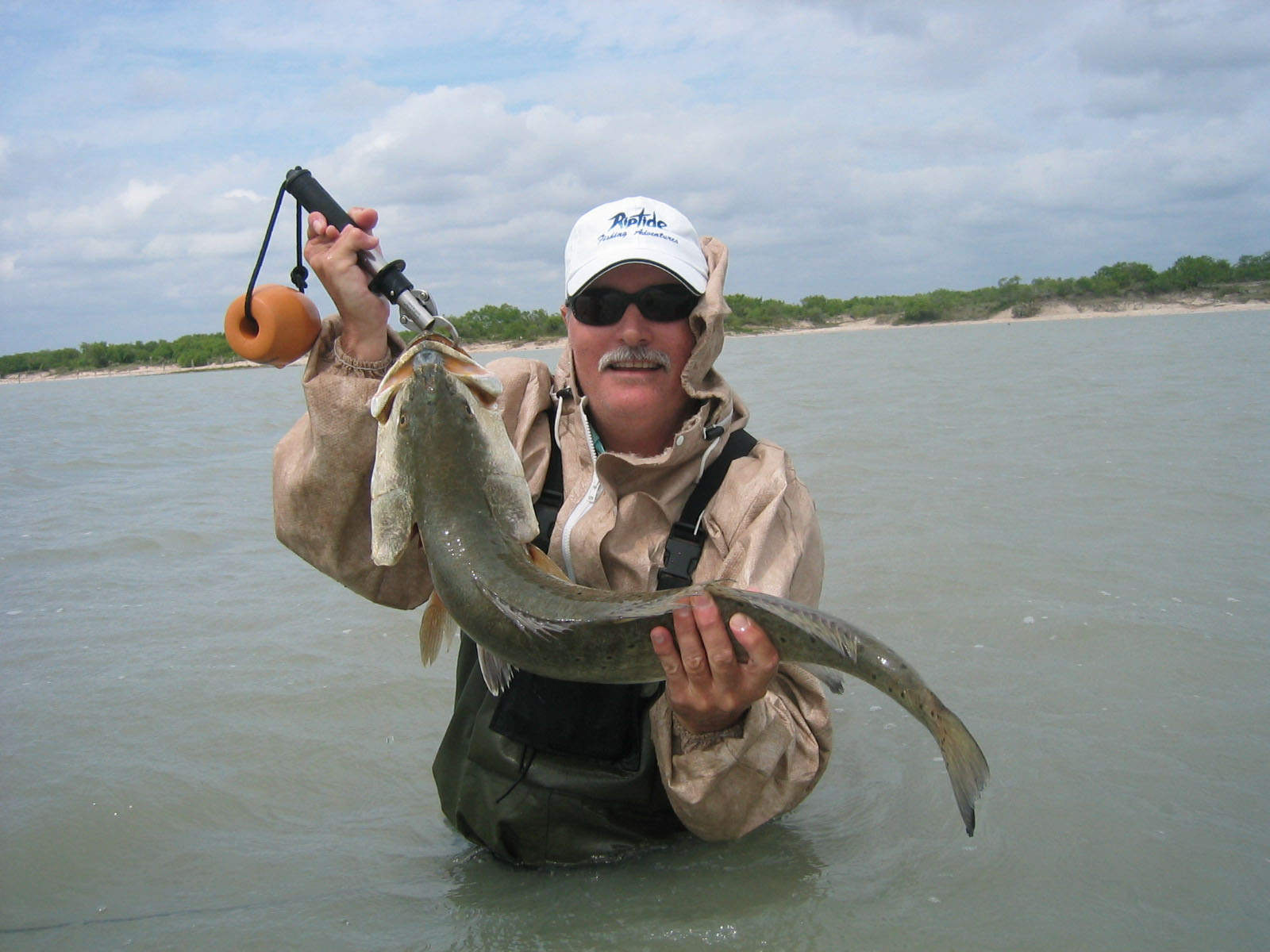 Bill Pitts with first Baffin Bay trophy — 31 inches and 9 pounds.
It all started with a phone call from a friend, Keith Kolaja, and then an invitation to join a fishing trip to Baffin Bay. I just turned 50 this year and have been trout fishing all my life, but never been to Baffin. We went down Sunday, March 15th and fished Sunday afternoon, Monday all day and Tuesday morning. The wind was howling all three days. I'm talking 30 MPH sustained winds with gusts 35-40. Our guide, Walt Kalinowsky with Riptide Fishing Adventures, said it was going to be tough but we managed to catch some nice trout. The thing I was amazed with was the number of large trout that we caught. I have a house in Port O'Connor and fish for trout pretty much all year long there. I might catch 4 or 5 specks over 25" in a year. But in Baffin we caught more than that on this one trip.

I was hooked. Keith and I talked with Walt and booked another trip a month later. Both of these trips were on a new moon which was very important. Walt said he consistently catches more big fish around a full moon or a new moon that any other time of the month.

Five of us met Walt on Sunday, April 15th about noon and headed out on the water. HE said they had been catching some nice trout in Alazon so we sent there first. We managed to catch some fish, but not what we were looking for. Monday morning we went back to Alazon and waded a big sand flat but only picked up a few nice fish. The wind had come up and was blowing 25 30 MPH by noon. We moved to a protected area on the King Ranch Shoreline that we had fished the trip before when the wind was blowing so hard.

Wow, what a difference. The water was about waist deep and full of mullet. We all lined up and began chunking top waters. Walt had been catching his big trout on an orange Skitterwalk with gold sides. I didn't see any reason to try anything else. As with most fishing buddies we had a bet each day for the largest trout. Now, mind you, we are all lined up doing the same thing. We were all getting blow-ups and catching solid trout. I'm kind of known as "The Camera Man" in our group. I always try to carry a camera with me while wading. It's easy when wearing waders but you have to get creative during the summer months.

Danny English was the first to catch a big trout; it was 28" and weighed about 7# on the Boga. I waded over to him, took some pictures, helped measure the big girl and he let her go to be caught another day. I was walking away; I made a cast and immediately hook up on another big fish. We couldn't believe it! I caught this fish and got her in my new Ego-Brand net. Danny was right there, so he helped me measure this one. It was 29" long and weighed about 8# on the Boga Grip. We took some more pictures then I let her go.

In a matter of about 10 minutes we had both caught out largest trout ever. I had caught a couple of 28's in my lifetime fishing from Galveston to POC, but never had reached the 29" mark. We all continued our wade, catching solid trout, some in the 25" 26" range. We had all decided we were going to let all our fish over 25" go. I think Walt appreciated this; as a pro fishing guide, most of his clients want to keep their big trout. Now I'm not against someone keeping a big fish to be mounted but now days you can measure it, weigh it, photograph it, and let it go. I have a pair of replica mounts that look as good as or better than the old traditional skin mounts.

It was about 4:30 pm as we continued twitching and walking the topwater lures. I got another big explosion! This was unreal. I loosened my drag and played her out. She made some good runs but I got lucky, she was hooked firmly in the jaw with one of the 2 treble hooks from the orange Skitterwalk. Danny and I had kind of separated ourselves from the rest of our buddies, so he waded over to take some more pictures. This one measured 31" and weighed at 9# on my Boga Grip. It was tough but I let her go.

I have been fishing for trout for about 30 years now and I had finally caught one over 30. What a great feeling!

We continued on with our wade and caught some more keeper trout. I had one more huge topwater explosion and had her hooked up for a minute or two before she let go. It was now about 5:00pm on Monday evening. Two of my friends had planned to go home today. Danny and I looked back and the other guys had made it back to the boat. We were probably 300 yards away so we called them on our hand held radios. They were ready to go because it was a long drive back to Houston. It was OK because we knew where we would be at daylight the next morning.

We were up early and waiting for Walt to pick us up. There were three of us now, Paul Kooi, Danny English and myself. Walt pulled up to the dock; we jumped in his boat and ran across the bay to the spot we had left them the evening before. Great, the bait was still there. You could see the big mullet come to the surface clearly concerned about something after them. Walt said lets slip out of the boat but don't get in a hurry. He said we should work the area real slow; we probably walked through some big fish the day before. The wind was still up; it was probably blowing about 25 MPH and it was just daylight.

Paul was the first to hook upon a big trout. As usual, I waded over to take some pictures. It was a 27 incher. We took the pictures and he released her. The talk had started; he was on the board with our daily bet. It wasn't long before Danny hooked up. His turned out to be 28" long, his second on this trip. We took pictures and he released her. Then it was Paul's turn again; he caught one that measured 28" also. I was beginning to wonder if I was snake bit. I had caught four or five trout but nothing over 20 inches.

Then boom! A big blow up and I had her on. I managed to land this one and Walt measured it. It was 29" long and pushing 8# on the Boga. We all continued our wade only moving about five steps then working the area thoroughly. We caught more fish, quite a few over 25". It was now almost noon. We had been fishing hard for more than 4 hours.

We were thinking about heading back to the boat when it happened. A huge splash erupted on my topwater. Walt was standing about 20 yards from me; he had just released a big sow that measured 29". He said " Bill I don't want to scare you but that's a huge trout, probably over 10 pounds."

She made some good runs but never came to the surface. All I remember was saying to myself, "stay on, don't get off," I hoped I had her hooked good enough to get her in. The good Lord must have blessed me on this trip; I got her in my net. I was shaking like I had buck fever; it was wild! Walt waded over and hooked her on his Boga, "she's pushing 12 pounds," he shouted. She measured 32" long. He said "No one releases a 12 pounder" and I agreed. We took her back to a bait camp; their certified scale said 11pound - 3oz.

What a trip. When it was all over we had caught 20 trout 25" or better. All were released except the last one. I had caught the four biggest trout of my life on this trip, 2 at 29", a 31" and a 32". I thought what else could happen, will I even enjoy fishing in POC after this Baffin trip?

My blessings continued. I was fishing one on the back lakes in POC on Saturday, May 19th in a small tournament we put on called the Port O'Connor and Huntsville Open, it is all within a small circle of friends and we call it the POCAHO. I caught a 30" trout that weighed 8 pounds 6 oz. on a bone color Super Spook Jr about 7:15 that morning. As you can imagine, my friends are about to disown me! Three trout 30" or bigger, all on topwaters, all in one month–what a ride! I hope it continues, but I know it cannot go on forever. You can bet one thing though, I will be out there whenever I can fire at them. It's a blast!