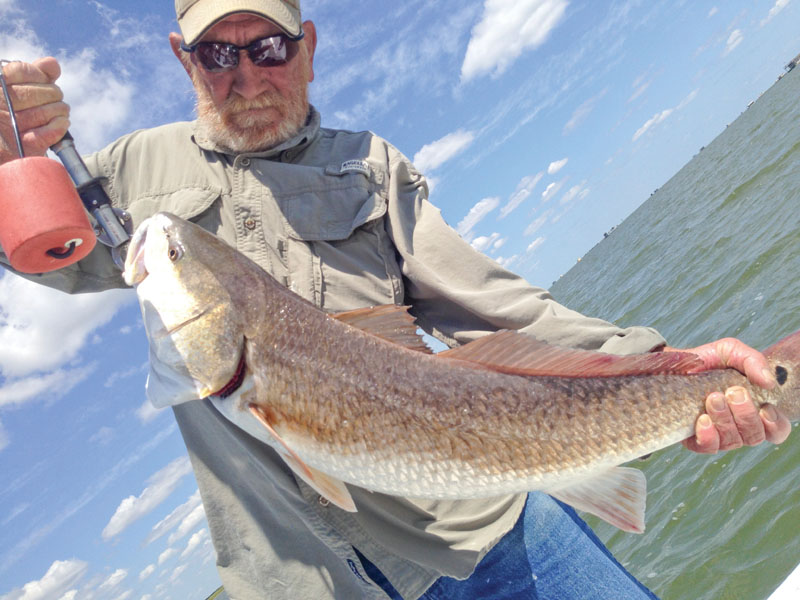 For the last fifteen of my thirty-one years on Mother Earth I have been consumed with chasing large trout in my home waters of the Upper Laguna Madre and Baffin. It has become an obsession to the point that I am sometimes labeled an elitist. I have been in the dog house (more than I care to admit) and have come close to losing employment. My love and respect for fishing and all that this lifestyle encompasses was instilled at a young age by my father, Robert Johnson.

Within the past couple years my family has watched my father's health deteriorate. I received an alarming phone call one morning during breakfast and was informed my father had suffered an aneurysm. My world stopped and the feeling that came over me was unlike anything I had ever experienced. The last time I'd heard of someone having an aneurysm they'd passed to the Pearly Gates. I was beyond horrified.

Had I lost my father, my friend, my mentor? This is the part of the story when having a great spouse comes in very handy. My lovely bride saw the helplessness and fear in my eyes and quickly asked for the check and pulled out her phone to learn more about what was going on.

Well, just like a good fishing story, the facts had been embellished as more people became involved in the telling. As it turned out the report of Dad suffering an aneurysm had been premature to say the least. Long story short, he had begun developing neurological problems and what was originally thought to be an aneurysm turned out to be seizures.

To this day, after multiple trips to multiple doctors and multiple tests, there still is no answer to what is causing the problems. The best they can do is prescribe a daily regimen of pills that resemble a rainbow. His seizures are not predictable and there has been no pattern. Basically, they seem to just happen out of the blue and go away almost as quickly as they appear. Because of this it is almost impossible to plan any type of activity for fear of an episode.

Last Friday my wife and I were on our way home from dinner and stopping off to visit our newborn niece. Dad would be there. After greeting everyone I noticed him looking a little down for such a happy occasion. My attempts at cheering him up were not working in the least. So, rare for me, I stopped playing. He met my seriousness with words I will never forget.

"You know what makes me so upset about these damn seizures? It's the fact that I can't have fun." And he went on to say, "I've always known that one day I would have to come to terms with the fact that I simply cannot do all the things I once did. But if you would have told me I would have to give up fishing with my boys I would have called you a liar. I never dreamed anything on this earth would stop me doing what I love. Disease, old age or crabs!" (My dad is kind of goofy like that.)

That hit me hard, real hard. Here I am at thirty-one. I am fortunate to have a beautiful wife who puts up with me, a career that supports my family and fishing habit, good friends, and an all-around great life because of what I learned from this man. Yet, he, to whom I owe so much, was standing in front of me saying he could no longer have fun. At that very second I made up my mind that it wasn't true, not if I had anything to do with it!

I offered to take him to our cabin on Sunday for a work trip that had been planned. It was meant to be quick, only a few small repairs, and we'd be back at the casa for a cold one shortly after noon. But my mind was in high gear and I wanted to make more of it. What I really wanted was to take Dad fishing.

Sunday morning rolled around. Early out of bed, early to load supplies in the truck and boat, but late to meet the others of our group at the ramp. That didn't matter because my Old Man was riding shotgun.

At the ramp we transferred supplies from the truck to the boat along with rods and reels and some tackle. We pulled away from Bird Island Basin and pointed my Shoalwater Cat toward Baffin. Listening to one of our favorites, Robert Earl Keen's Five Pound Bass. Seemed rather fitting, especially since Dad changed the lyrics to ten pound trout.

We arrive to our home away from home and quickly got busy. Dad was being the goofy old man I love; telling jokes and stories and generally being a good supervisor. Once the repairs were made we bid adieu to our home on Styrofoam and went looking for some good water.

Now, I'm not really comfortable fishing unless I'm wading. I'm not at all keen on drifting. I know it can produce fish and, at the end of the day, that is all I wanted, so that is what we did. I wanted Dad to feel a tight line. I wanted him to realize that he could still enjoy life and have fun.

First drift produced very little action and the second was about the same. Before long the stiff northeast wind had the water looking like chocolate milk. Regardless, I could see the intensity on my father's face up on the bow, studying what little he could see in the murky water. I suggested we continue on out to the mouth of Baffin and into the Mother Lagoon. He looked at me as though I'd just drank his last Dr Pepper. He asked if we were heading back to the ramp and I replied sarcastically, "Well are you done having fun yet?"

We made a short run and came across a stretch of trout-green water on the backside of a spoil island. Grass beds, potholes and rocks were easily visible and plenty of bait was showing. I set up a drift between two sets of rocks and Dad eagerly went to bow and started studying the water, making random casts and comments about mullet jumping for their lives. Cast after cast, every turn of the reel handle, his focus was obvious. I suppose it's like riding a bike.

Finally, after what seemed forever, he cocked his head toward me, smiled, and set the hook. That was a pretty cool sight.

I watched his line go slack briefly but he quickly reeled it tight, like an ol' salt instinctively does. The yet to be determined species slowly came to the surface eventually revealing a copper tint. Drag was screaming and he was grinning ear to ear.

Dad would gain two yards, the bruiser would take three. Dad would try to turn it toward the stern and it would run toward bow. It was actually very impressive seeing him maneuver through the maze of ladders, saw horses and all sorts of tools. Kind of added a greater sense of accomplishment to the whole act.

Once the red had enough she generously laid on her side as if she was giving herself up for the greater good. Placing the Boga on her bottom lip Dad gently raised her to get a quick weight and wanted to set her down to avoid stressing her spine. Twelve pounds! The measuring stick confirmed what we already knew. Way oversize at 31-7/8 inches. Without missing a beat he insisted that she be released quickly. Photos were hurriedly snapped and he carefully placed her back in the water. A few back-and-forth swishes to fully revive and off she went.

Dad rocked back from his knees to a sitting position on one of the back hatches and looked up at me. "Now how cool was that," he exclaimed!

It was his idea to end the day on a high note. I took his rod to place it in the rack as he settled against the leaning post, in the best mood I'd seen in a long time. He grabbed me in a big hug and said two very special words- "Thank You!"

With all that we are blessed to enjoy it is easy to take some things for granted, but life can change in the blink of an eye. Embrace what the man upstairs has put in your life and live it every day for all that it is worth. Fishing should be shared with the ones you love and every day on the water should be cherished. Wetting a line with Dad was a great experience.

God is good. Life is good.