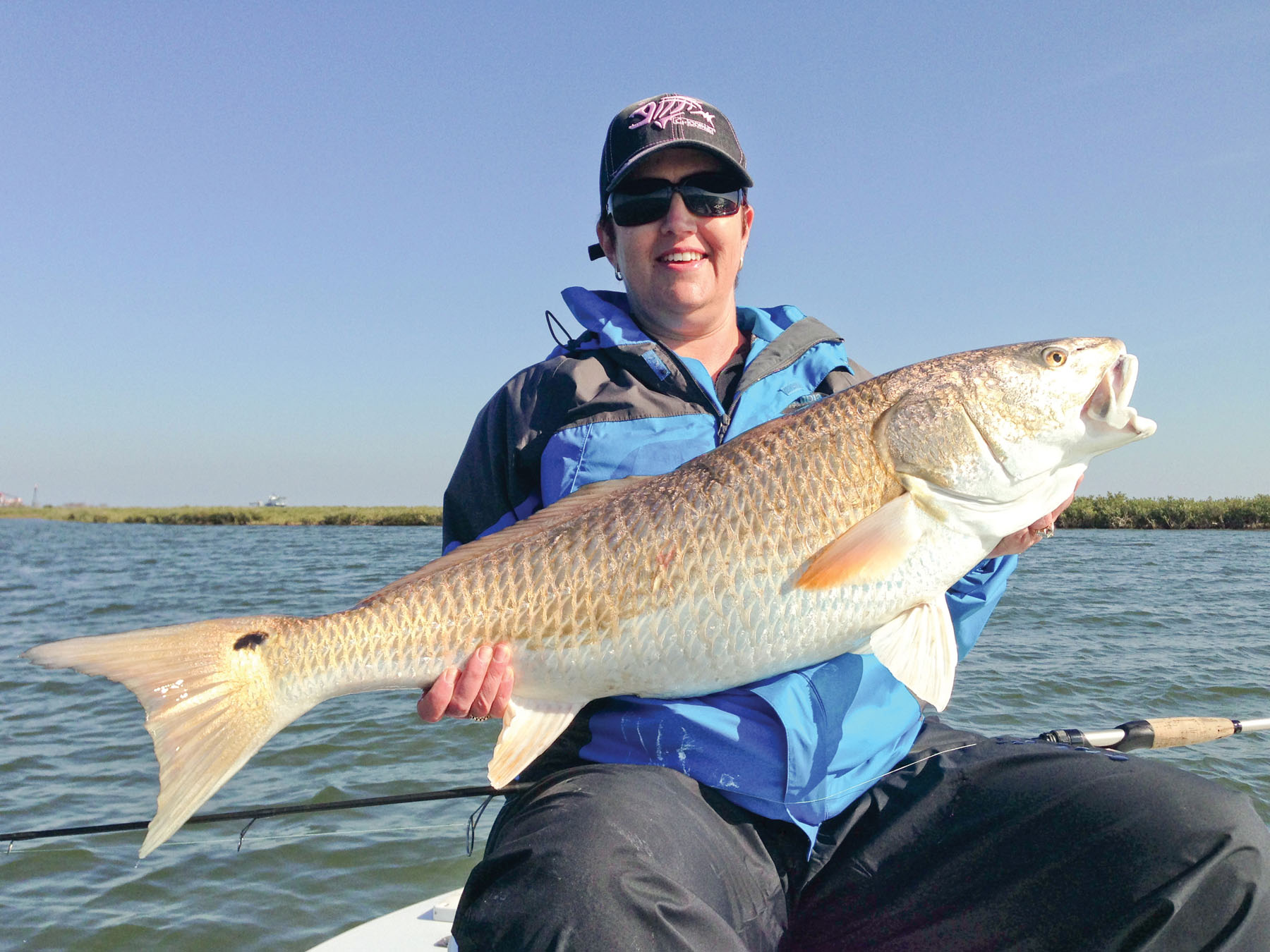 Too big…really?
This is one of those articles that kind of rolls around in your head for a couple months while you debate whether or not you should put the words on paper. So at the risk of ticking off a few folks, here goes.

A while back I was guiding one of my regular fly fishing customers on an overcast and windy day. It was not exactly ideal; actually it was pretty damn poor. Any red we did manage to see left in a puff of mud from under the bow. No worries, this guy has fished many years and fully gets that there are days you'll have to grind it out. We also happen to enjoy each other's company and spend the slow times solving the world's problems.

As we eased through the marsh he asked a question I've heard dozens of times. "Since you know redfish so well, why don't you fish all of those redfish tournaments? Seems like there's one nearly every weekend somewhere along the coast." I replied with my standard answer, "I just don't enjoy fishing them." That usually suffices and the conversation moves on to another topic. Being an attorney he sensed a scab and started picking until I told the whole truth.

At one time I did fish tournaments. I traveled all over the Gulf coast fishing kayak tournaments for three years. It was fun. There wasn't a huge emphasis on winning. It was more about the camaraderie among like-minded people. As with many things, it quit being fun when a few guys started taking it too seriously and bent the rules to the point of breaking. The series eventually imploded over a rules violation by a team backed by a company that was a title sponsor. The director let the violation slide and just like that, nobody wanted to fish that series any longer.

Later I got involved with the beginnings of the Redfish Cup and Texas Redfish Series. Again, I enjoyed the camaraderie among fishermen...at first. Then there was talk of a shaved tail to get in the slot, icing live fish to shrink them to size, baiting up an area; etc., etc. I ignored most of it. My partner and I agreed we were in it for the fun and if we won anything it would be a bonus.

Then one day I was standing in the weigh line behind a very well-known and respected angler and fishing guide. He had one hand inside his fish bag and was obviously straining a bit. He went on to say he had a couple good ones, but one was just a touch over the last time they measured it. While waiting to weigh in he had that red by the wrist of the tail and was shoving it with all his might into the corner of the bag. It made slot, but probably needed to see a chiropractor afterward. At that moment I started to reconsider my participation in these events, but I was committed to my partner through the end of the season.

Towards the end of the season there was an event on my home waters. My partner was tied up so I went to do a little scouting. I eased up onto a long shallow flat at the far back of the marsh to find it absolutely loaded with reds crawling around with their backs exposed. Awesome. Now I'll just catch a couple to check their size. Hmmm. Every one of them was more than willing to eat, but none were over about five pounds. That would never cut it on tourney day. I stuck around for a little while and caught a few more to make sure. Every one of them was the same size. Dammit, I need eight or nine pounders. I left in search of larger.

I found some, but I was really irritated with myself. If it hadn't been for this tournament fishing I would've had a fly rod in my hand, eased out of the boat and proceeded to have one of those days you remember for the rest of your life at that first stop. It was right then and there that I made up my mind. I have nothing to prove to anyone regarding whether or not I can catch that perfect 27 7/8" redfish. All I want is to enjoy every day I get to be on the water to its fullest. I want my customers to have fun and get to experience the sights, sounds and smells that I live for.

I know the need to compete runs strong in some people. I apparently missed out on that gene when it comes to fishing, hunting or anything in the outdoors. Being there and living in the moment simply for the joy and satisfaction of being lucky enough to experience it is fine with me. I fully enjoy seeing someone else catch the bigger fish on any given day. I've had many great days, so why should it bother me that someone "beat" me?

My customer never turned to look at me throughout this entire speech. At times I'd pause to see if he had lost interest and I'd gone over the line. Nope, he wanted it all. There were more instances of bending the rules, questionable behavior and outright nastiness that I related to him. Most of this I'd never really talked about, but it sure felt good to let it all go.

My decision to walk away from tournaments gets verified every so often by things I hear about or read. One stuck with me recently and perhaps pushed me to go ahead and scribble down these thoughts. It was a post on Facebook by a young man relating his tournament day experience. He had apparently stumbled into a motherload of oversized redfish in some marsh lakes. He and his partner spent the entire day catching and releasing these beasts. They managed one slot red but never could pull off that second one. He was ticked off and wondering why he was cursed in regard to tournaments.

So here's the deal. If you truly enjoy fishing tournaments, more power to you. But if you do fish tournaments please take a long hard look in the mirror. If you get mad about catching an oversized fish, settle down and have some fun. If winning a tournament makes you even consider straying from your moral compass you might want to rethink what you're doing and why you're doing it. If being in a tournament makes you feel like you should do things like burning a shoreline, crossing a bay in crazy dangerous weather or maybe just snubbing an old friend's request to go fishing because you're afraid he'll steal your tourney fish–you need to stop. If you wouldn't do it fishing with your dad, a tournament is not an excuse.